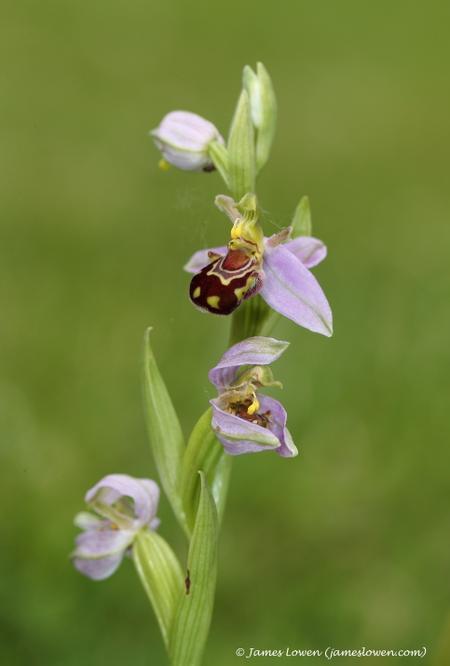 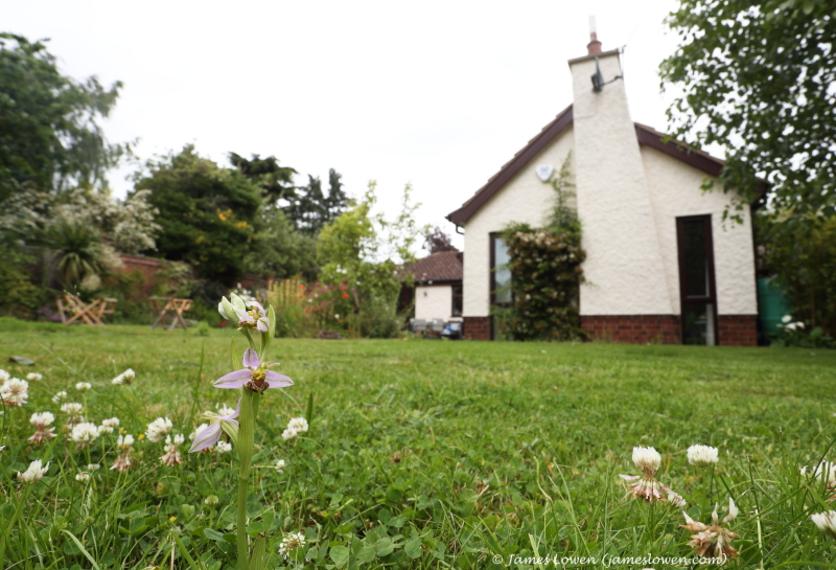 Last June, Will Soar found a large colony of Bee Orchids near a suburban housing estate in west Norwich. I took a look this year, and learnt that 'large' actually meant 'huge'. I counted a jaw-dropping 1,511 plants along just 200m of roadside. And, as I was leaving for the pub, realised that I had not counted any growing in the middle of the roundabout. I had a choice between completing the count or heading for beer. No surprises for guessing which won; I shall need to return to finish the survey.

A blog of two halves. First, Bee Orchids. On Thursday this week, while mowing the lawn, I spotted a single plant growing in our lawn. No idea how it go there: windblown and testament to organic gardening? Or something I inadvertently brought back with me from countryside walks?

I tried to check each plant carefully for variants. I didn't find any, although there was one that recalled var. belgarum and three others that prompted thought of atrofuscus. All seemed to be within acceptable variation for normal plants, though. 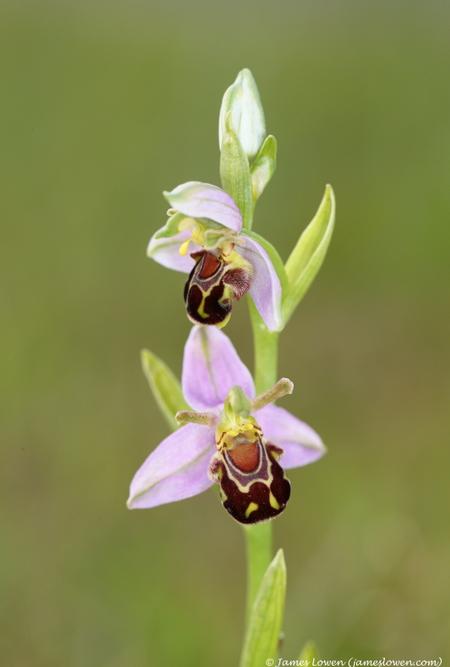 Views were distant but acceptable. This is a species with which I had form. About ten years ago, I found the first Elegant Tern for Argentina - with Mark and others subsequently locating further individuals. Over time, though, doubts set in - and we gradually realised that our birds were extreme orange-billed variants of Cabot's (Cayenne) Tern. Research also suggested that Elegant was a strictly coastal species, with no definitive records of birds in open sea. If Elegants didn't cross open sea, what were the birds in Europe and South Africa? I spent a few years being highly (and vocally) sceptical of any claimed Elegants in the Old World... until DNA analysis proved what others savvier me had long argued - that these were indeed Elegants. My hat was duly eaten. And this bird duly twitched. My first UK tick of 2017: about time too!

Yesterday, I was heading down to London to beer with a friend - Mark Pearman, author of a long-awaited field guide to the birds of Argentina - and see a Wedding Present gig. The previous day, when the Elegant Tern reappeared briefly at Hayling Island, Will Soar and I discussed whether the head down to southern England and hang around doing orchids/butterflies/dragonflies and be alert to news of a relocation. In the end, my daughter demanded to open her birthday presents, so Will and Dave Andrews went alone. I set off south as soon as preents were opened and cake consumed. En route, news of the Elegant Tern broke from Church Norton in West Sussex. Will and Dave made swift progress and saw it; top plan, deafly executed. I cancelled the beer with Mark and headed down to Pagham... arriving roughly 90 minutes after it had flown off. Finding no space in the car park, I nearly drove straight off and headed to London. In the hunt for a space, I nearly drove into Peter Moore​, which changed my mind. As I was on site, I might as well have a natter with Pete for half-an-hour, then head to London. But there was no rush. I found somewhere to park, phoned Mark to apologise, then strolled down towards the Harbour. At which point Peter called me: "Get down here quick; it's just reappeared!" Just as Peter arrived on site, Barry Wright had spotted the bird on an island (not the tern-colony island). What timing!