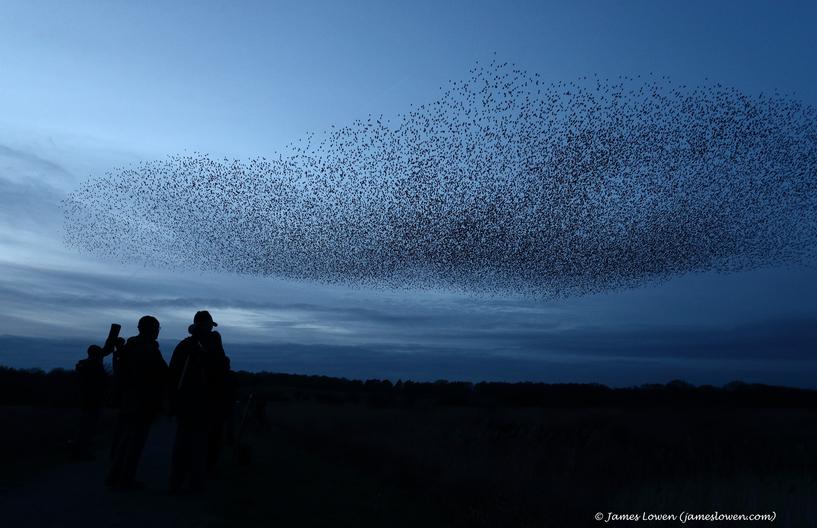 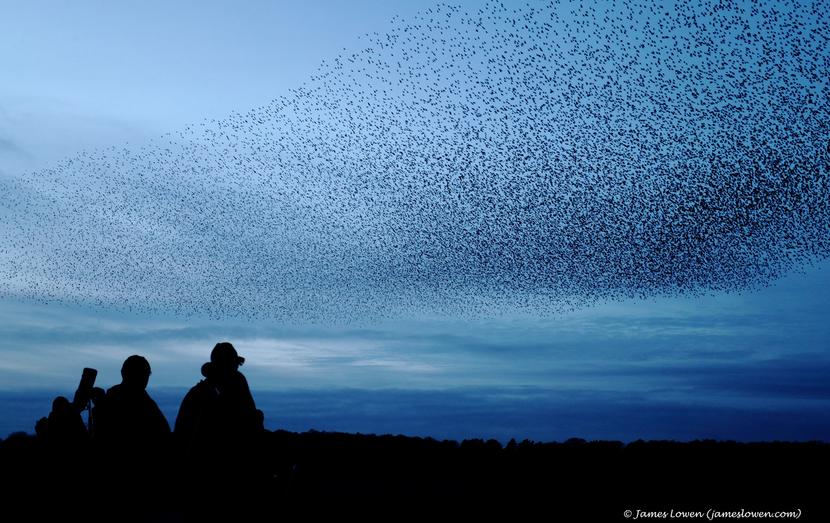 See that dot below the snake in the above image? That's a photobombing Marsh Harrier. Wonder what it thought. 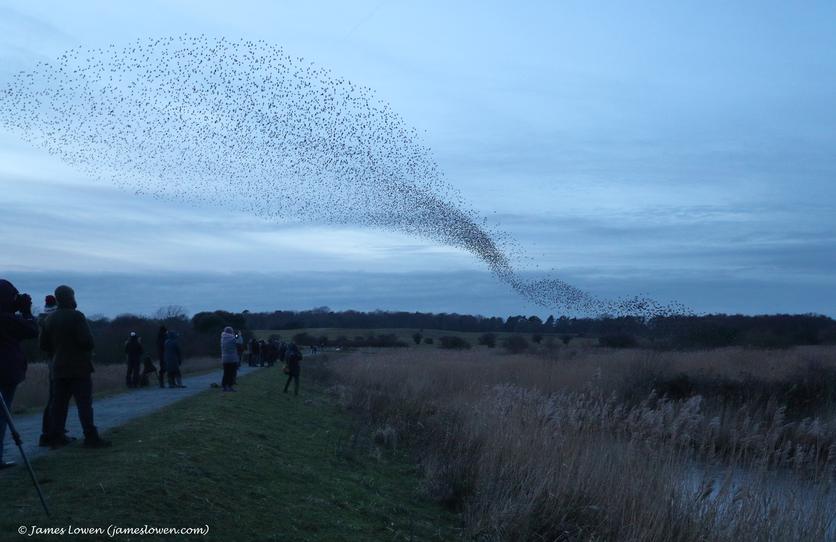 Whether it is Winterwatch that has inspired these visitors or Blue Planet II or a love of photography or their local wildlife trust or indeed the RSPB Big Garden Birdwatch, I don't know - but I am personally immensely grateful. The world needs ever more people who care about Nature and love wildlife and want to protect or, dare I say it, even enhance our environment. Those vulgar Sturnus ​made absolutely everyone smile tonight, their hearts (like mine) singing with joy and form and movement and the whoosh! of wings. 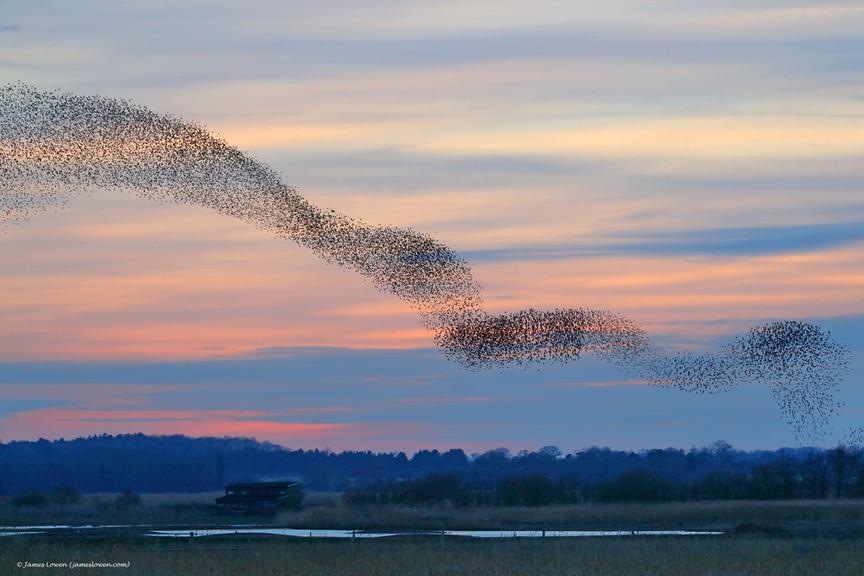 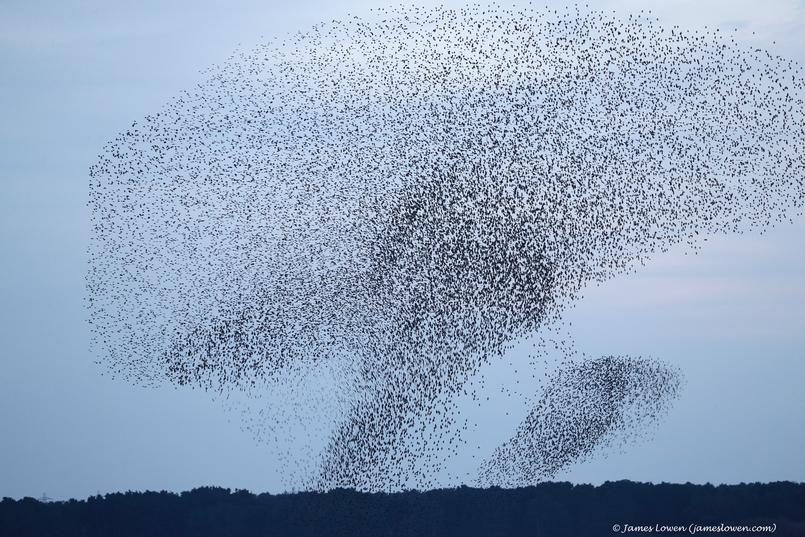 Then the vulgaris made their entrance. Bold it was too: all 40,000 (or so) of them, heaving over the woodland near the visitor centre and heading our way. Their performance - mostly over the Scrape and South Levels, flirting with the obscenity that is Sizewell, but sometimes directly overhead - was brief, but brilliant. One thing with wildlife-watching: no two experiences are ever the same. Murmurating Starlings go quite some step further. No two moments are ever the same. So you cannot but keep watching, enthralled, bemused, bewildered, amazed.

The main objective of my 'hoary and holy' afternoon in Suffolk on 8 Feb was to stay out until dusk and watch the Starlingmurmuration at RSPB Minsmere. After mooching around the Scrape, seeing little more than a couple of redhead Smew (and even they were sulking, asleep on a bank), I was in position at North Wall about 1530, well before the allotted hour. Indeed, nothing happened for 60 minutes. For that time, there were an order of magnitude more murmuration-watchers ('murmurers'?) than there were Sturnus vulgarius. A couple of Bearded Tits flirted with the reed tops, Cetti's Warblers scolded and a pair of Marsh Harrier half-heartedly skydanced. But otherwise it was decidedly quiet. And cold.

After five or so minutes - this wasn't an hour-long show - things started to get really good, with ribbons and smokes and noodles and linguini and I'm blowed if that isn't a serpent!

Think I'll get a murmuration for my next (well, first) tattoo. That's the impact that Starling murmurations have on their privileged observers. Relatively few of the human throng gathered on North Wall were birders. Most seemed to be people simply willing to be enthralled by the natural world. There weren't many pairs of binoculars on show. 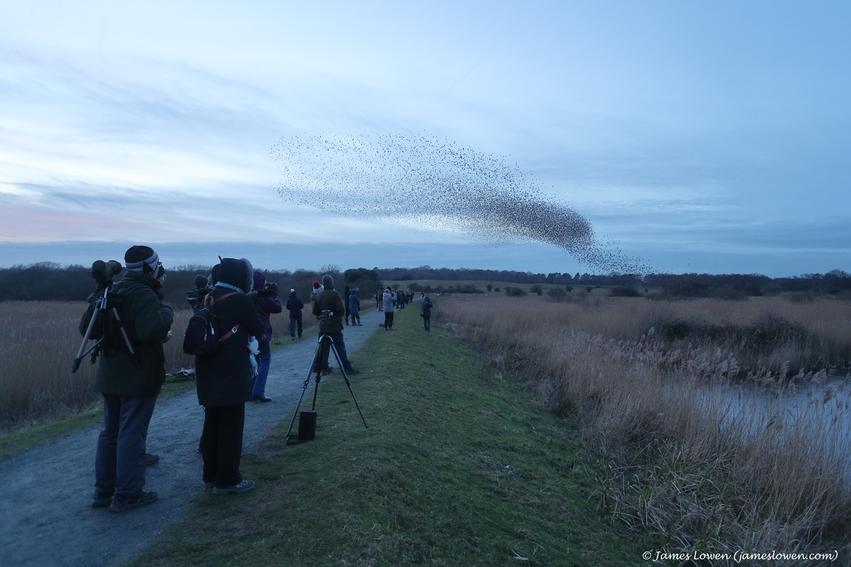 I am a fan of Starling throngs, but don't visit them often enough. My last was at RSPB Strumpshaw Fen in December. I went three times, though the third - aiming to break my parents' murmuration virginity on Boxing Day - drew a blank. I've also written about them, including in two wildlife-travel guidebooks: 52 Wildlife Weekends (the Avalon Marshes roost) and the oh-so-nearly-ready 52 European Wildlife Weekends (Rome). Here's a reminder of the first, and a taster of the second. 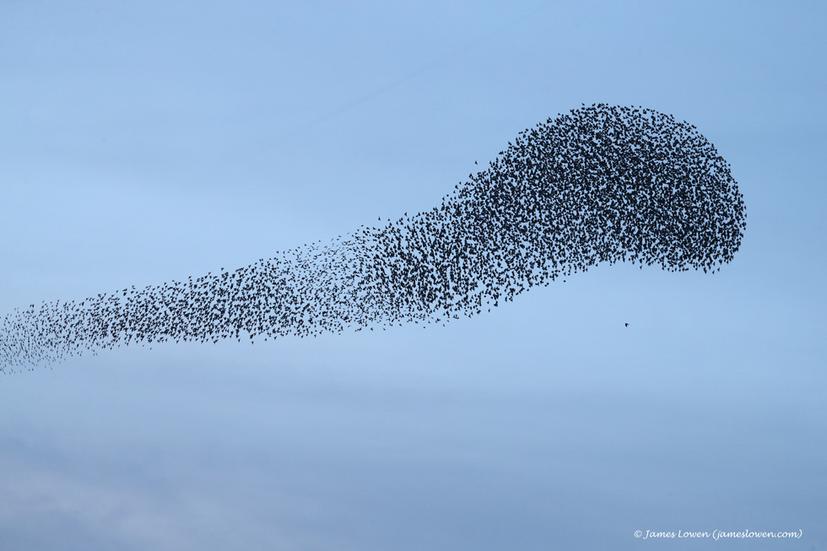 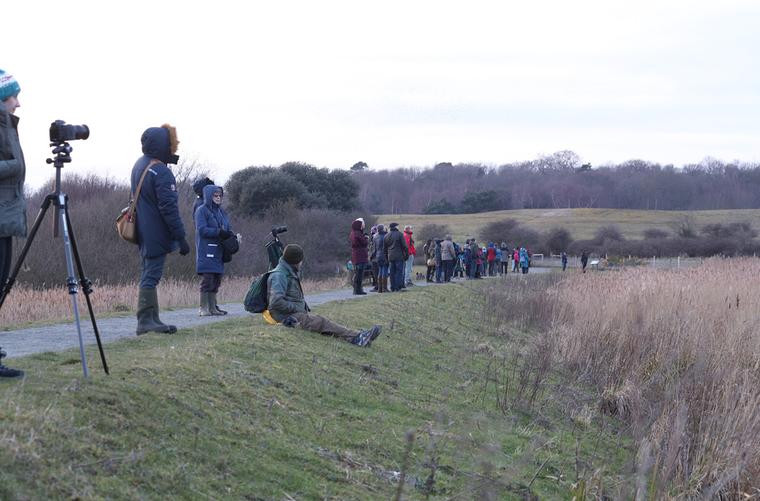 If you yet haven't seen a Starling murmuration, you must. RSPB Minsmere, and doubtless several other reedbed reserves around the country, beckons you. Go. And if you have seen one, go and see another. Don't dilly-dally. Just go.