Over the years, it has become my primary wildlife-watching target each spring.Coinciding with the spectacle is very difficult indeed. The window of opportunity for seeing dancing serpents is narrow: between when the males have sloughed their old skin and when mating starts. The best week varies with site: here in Norfolk it appears to be the second or third week of April (last year, I missed dancing by a few days, as I was abroad, returning in time to watch mating). However, the weather needs to be right: warm and sunny. Afternoons are best, which stymies me, as I normally visit Adder sites in the morning to enjoy them before they have warmed up. Yesterday, I tried something different. I was buoyed by James Hanlon's experience at a Suffolk site on Friday, when he watched two miles in combat for 90 minutes. 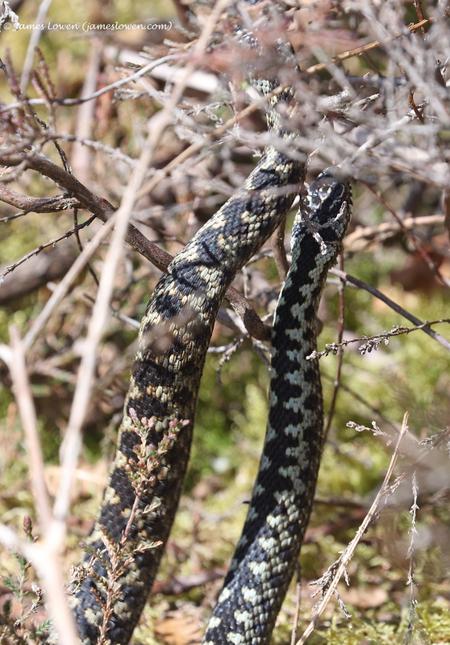 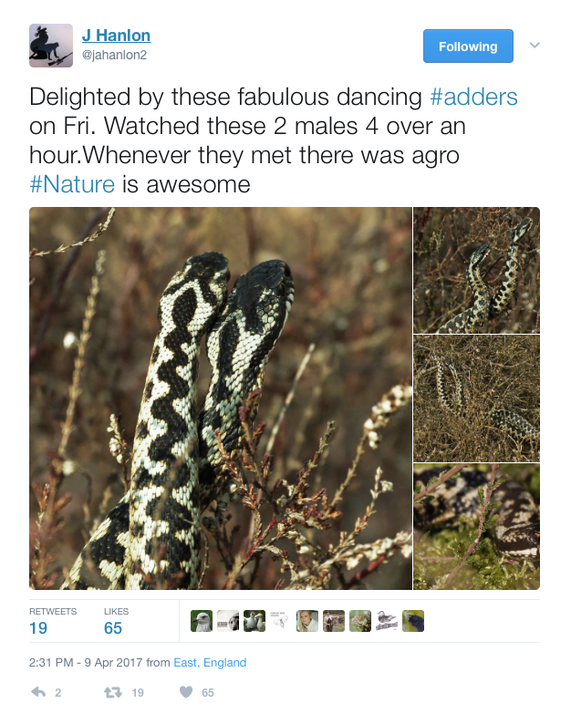 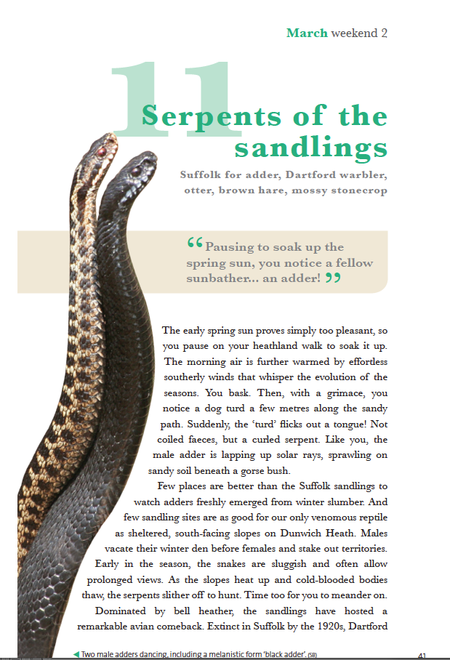 On Saturday, my experience with a feisty male Adder in Norfolk suggested that hormones were raging and that combat might be approaching at this site too. That this grumpy male was in the same small area as three other males, and in an area where I have regularly seen females (and observed mate-guarding in 2015), suggested to me that I concentrate my efforts here. I arrived at midday, with two hours (only!) to try my luck. And I scored!

This is my eighth spring of Adder-watching: five years in Kent and three in Norfolk. At first, even spotting the back of an Adder slithering into the undergrowth was excitement enough. For the past few years, however, the Holy Grail has been to see male Adders writhe or 'dance' in combat. The first (and still the best) photograph I have seen of this spectacle was taken by a friend, Steve Babbs, and published in my 2013 book 52 Wildlife Weekends. 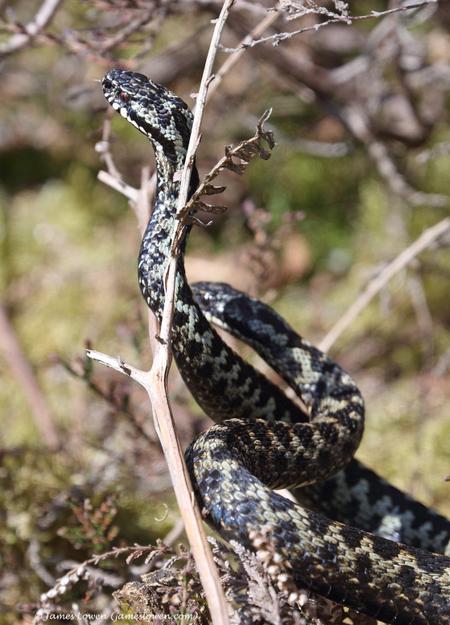 A circuit of the target area produced a silvery male moving slowly, but deliberately up a slope. I reckoned that he had sense something interesting, whether another male or a female, and was making a careful and inquisitive approach. I followed him. Suddenly a rustle in the heather and a male Adder head and neck lifted out, well off the ground, as if about to strike. Then a second male followed. The whole 'dance' was over in six furious seconds, so the pictures I rattled off were record shots at most (but ones only possible due to the super fast autofocus of my new Canon 1D X ii).

The vanquished male disappeared and the victor... returned to the female who he was guarding! I then watched - largely concealed beneath the heather - mate-guarding and mating for the next hour. One other male - a small silvery thing - showed some interest, but soon realised he had no chance and slunk away. A Grass Snake was a surprise (the first I have seen here), but too quick for my camera. All the time a Woodlark was singing; so too a possible mixed singing (frequently churring) Chiffchaff. But my eyes were on the Adders, and my mind firmly fixed on those six wonderful seconds of combat. My most-wanted UK wildlife experience - finally!