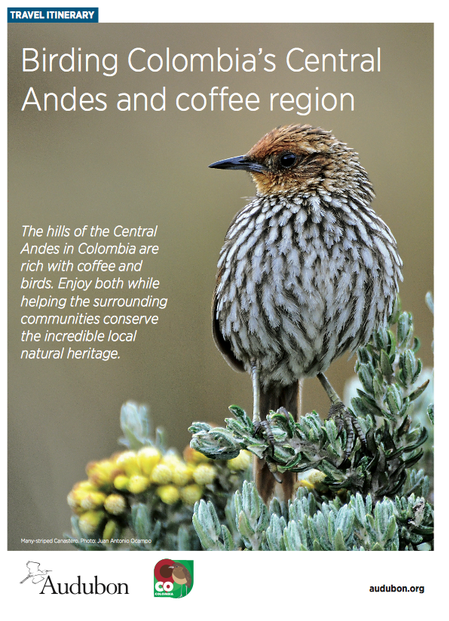 A week ago, I attended the South American Bird Fair in Manizales, Colombia. This formed the first part of the a press/fam trip, sponsored by ProColombiaand instigated by BirdLife International, to central Colombia - marking the launch of the Colombia's Central Birding Route established by the US NGO Audubon. I will cover the trip through a series of (text-light, image-heavy) blogs and a suite of articles (in The Telegraph, Bird Watching etc). This first missive focuses on the Bird Fair (which I will write up more fully for Neotropical Birding magazine).

Now let's get into the forest... there's lots to explore, even on a very short trip! We visited three principal sites: Montezuma (where we stayed at the groundbreaking Montezuma Lodge), Otun Quimbaya (government accommodation) and (after a rather lengthy journey) Rio Claro. Sincere thanks to all for hosting us.

Nature Trips Colombia organised the fam trip, which was led by boss Cesar Angel and (excellent) guide Andrea Beltran. Heartfelt thanks to them both - and to the variety of other local guides who accompanied us at various sites. 'Us' was a motley group of hacks, conservationists and tour leaders: Bill Thompson III (Birdwatcher's Digest), George Armistead (Rockjumper), Rob Ripma (Sabrewing), Claudia Vital (Far South Expeditions), Ben Box (South American Handbook), Alex Dale (BirdLife International) and - instigator of the trip - Jim Lawrence (BirdLife International). A great bunch; thanks all!

I have alluded to it above, but one of the most heartening things about Colombia was the preponderence of young female birding guides. Attagirls. 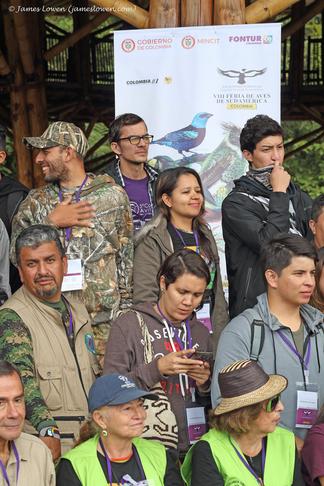 I  only joined one of the birding trips, which was in forest around the conference venue, Recinto de Pensamiento. We failed to see Golden-plumed Parakeet, but had a nice introduction to Andean birds, including creatures such as Rufous-crowned Pygmy Tyrant, Andean Motmot and White-sided Flowerpiercer (thieving nectar). Pleasingly, there were also several Canada Warblers, a species I'll be writing about in connecting with ProColombia's sponsorship of Asociacion Calidris work on saving the species - which forms part of the BirdLife International Preventing Extinctions Programme.

Back to the South American Bird Fair. This was a well-run event. Morning birding trips preceded afternoon talks and symposia. A single lunch venue made for a great sense of community spirit. The trade-fair element was much slighter than at Rutland, and very much focused on Colombia. Probably 80% of attendees were Colombian. Over half looked to be under 30. The gender balance was perhaps 40:60, female:male. Both the latter two stats are very heartening.