Staying at Dungeness Bird Observatory is always rewarding. There’s always something to see. The ‘Fridge of Beauty’ harboured Hummingbird Hawk-moth, Pearly Underwing, Vestal, Anania verbascalis and Red Underwing. I was lucky enough to be with Jac Turner-Moss when he discovered a new dragonfly for the Dungeness recording area – Willow Emerald Damselfly – in a Heligoland trap. There were plenty of Phylloscopus warblers around, plus a Spotted Flycatcher. Painted Ladies and Red Admirals were everywhere and at least one Clouded Yellow included one spotted roosting by night. Best of all, I happened to be sitting by the mot-trap at 01h40 one night when a Convolvulus Hawk-moth clattered across the roof, down the wall and bounced off my lap onto the floor. (In the light of this beast, I shall stay sanguine about the Southern Migrant Hawker found five minutes after we departed, and the Clifden Non-pareil brought to the Obs an hour later...) 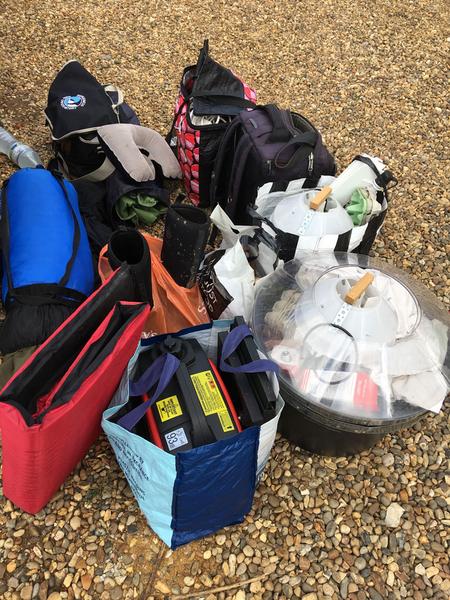 Clifden and migrant moths aside, we were here for two rare residents. The first was Marsh Mallow Moth, which is known only from a few sites in south-east England. Their effective guardian, Sean Clancy, kindly allowed us to join him at a survey site, where we admired roughly a score of these surprisingly large and subtly attractive moths. This included three pairs mating, but also one unfortunate individual spiked with venom inside a spider's web.

After a month of nothing at home (rather than in the wilds), parenting, Birdfairing (or seawatching) and boobies, the Wingman and I reunited for three days in south-east England. Our primary targets were two damp-sounding moths (Fisher's Estuarine and Marsh Mallow) and the ginormous Clifden Non-pareil, with the chance of some migrant action at Dungeness Bird Observatory, where we again slumbered through daylight hours.

Our other target was Fisher's Estuarine Moth. I had been tipped off that the species was already on the wing in Essex, so alerted Andy Taylor, who lives close to one of the north Kent populations. The population on this side of the Thames is a little controversial as it is generally understood that to relate to descendants of individuals introduced during the 1980s. (That said, Andy personally queries this, having not unearthed confirmatory evidence.) Andy holds a licence to survey this legally protected species - so joining him (rather than looking, illegally, on our own) was a must. Andy put his trap out on Sunday and caught the first 'FEM' of Kent's year. On Monday, we joined Andy to survey the main Kent site. Rather disappointingly in the suitable conditions, we drew a blank. We found plenty of other moths, including the rare micro Agonopterix putridella (Estuarine Flat-body) which shares with Fisher's Estuarine Moth a fondness for Hog Fennel. But no FEM. Accordingly, we had to resort to seeing the caught individual and joining Andy as he released it back into its breeding domain. And what a gilt-edged stunner this is - all bronze and gold and brass.

Let's start with the bad news. We failed on Clifden despite two nights trapping below aspen at a known site in Orlestone Forest, Kent - indeed, a site where the species was caught less than a fortnight ago. After recently enjoying one of the beasts caught by a friend, I really do want to catch my own. So far, it's not to be. We didn't get much by way of compensation. Oak Lutestring was a new macro for me (and proved the commonest moth), and Svensson's Copper Underwing was the first adult I have seen. We had a couple of Epinotia micros new for me, and single (different) Dark Sword-grass were seen on each night. Common Darter was a surprise - the first time I have caught one in a moth trap.