It's be an eventful few days, what with all the snow. Seemingly everyone bar me has bumped into innumerable Woodcocks, but my valley walks have produced not one of the three long-billed potbellies (the others being Common and Jack Snipe). Fail. In the Wensum, at least, part of the problem is that the valley remains massively flooded, preventing the snow from blanketing the ground as it did during the Beast from the East, when Dave Andrews and I found the fully dumpy brown trio locally.

Garden birding was a mixture of epic fail and elated eyes. A flock of Lapwing were spotted flying due south towards our place, but must have diverted before reaching there. A quartet of Goosander were watched by Mike Hoit heading northwest over the Golden Triangle and would possibly have been visible from mine had they not discovered the Wensum and been seen by Dave Andrews instead. A gaggle of 65 Barnacle Geese passed within half-a-mile of home as they flew over Colney GP but were invisible from mine. Fail, fail, fail. The plus side, however, include a glowing male Yellowhammer that flew over calling (the third house record) and a bandit-masked, pirate-garbed first-winter Mediterranean Gull that had me whooping for joy as it flew low over our air space as the afternoon line of gulls headed east (fourth house record). For a while, I even wondered whether the purported adult Lammergeier might venture into Norwich airspace, given that it reportedly moved south towards Norwich from its initial sighting. 'Purported'; 'reportedly'? Remember that the initial claim and photo come from within a mile of where I bumped into Flysch/Vigo last September: an unfeasible coincidence, surely.

Two other good local birds were a pair of Dunlin and a Green Sandpiper at Bowthorpe; seemingly unable to see the former, it took a dressing-gown-clad Dave Holman to get me onto them, directing me from his bedroom window... Down at Whitlingham CP, I failed again on a Bittern, but the largely iced water brought many of the wildfowl close, and stunning light enabled a few nice images to be taken (see above). A 14-strong flock of the globally threatened Pochard was good locally, but the highlight was the 2nd-calendar-year Greater Scaup found by Jus Lansdell a few days ago. This is an underwhelming individual, with barely an excuse of a white face patch and the muckiest bill pattern of any Scaup I've ever seen (albeit still within allowable range). A nice Norwich tick (if I kept a Norwich list, that is). 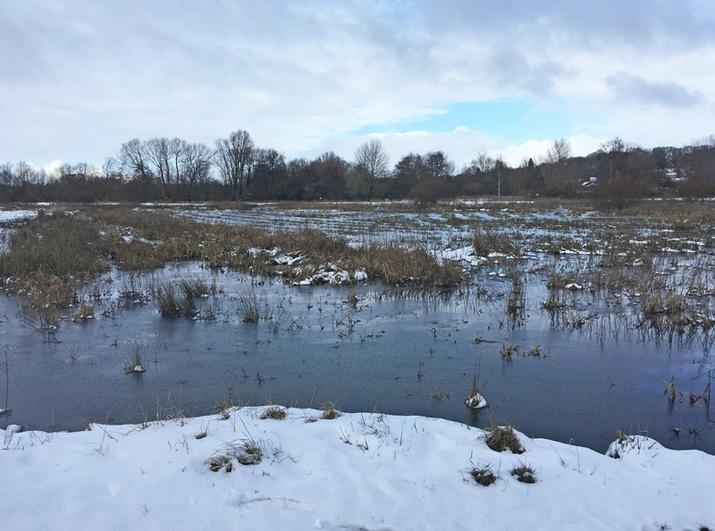