One of the great stories of birding lore concerns a Common Nighthawk - a mega North American vagrant - on the Isles of Scilly one October. One was reported over the CB radios that birders used (and perhaps still use?) to communicate findings across the islands. This species slumbers by day and the bird was found resting on the ground, in a field. When other birders reached the site, however, they found themselves face to face with something different. And so the message went out, roughly along the following lines: "The Common Nighthawk... is a cow pat."

That story was in my mind as I scrambled to pack my optics just before noon one day in late September this year. A flurry of messages came through on my phone, announcing that there was a Common Nighthawk in Oxfordshire. A legendary bird in an incongruous location. Within seconds, a phone call from Wingman Will. He didn't even need to ask the question. I simply said "Yes." Which meant: "Yes, let's go", and "Yes, pick me up in a few minutes". Three-and-a-half hours later, we were on an urban cul-de-sac, gawping at this American nightbird as it roosted on a garden fence, immediately behind a glowing scarlet Audi TT. Never has a sleeping and ostensibly motionless bird been so thrilling. It wiggled, it yawned, it looked around, it jiggled: it was camouflaged cow-pat-like fabulousness. At the time of writing, it is my only UK tick of the autumn, which makes the few hours we spent in its company - until it rose into the air at dusk, hawked insects and disapparated south - even more treasured. 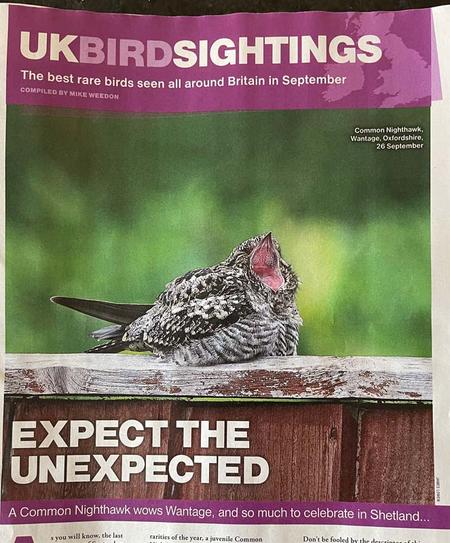