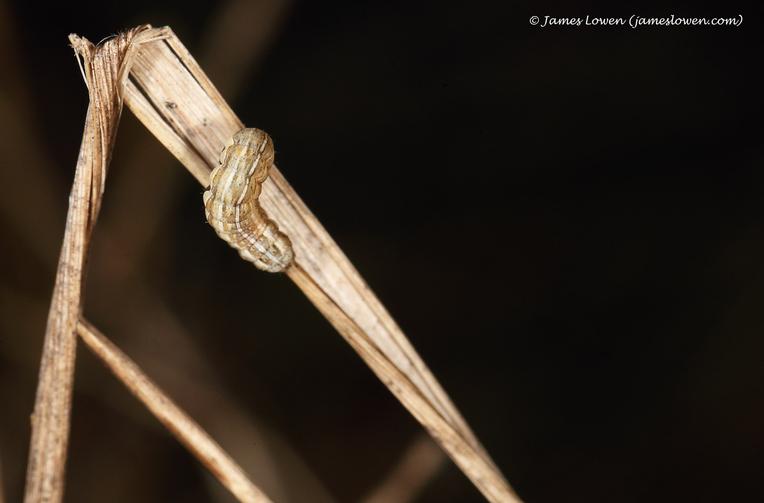 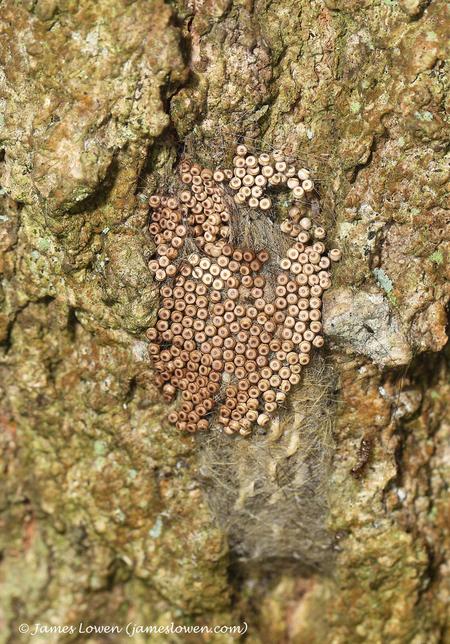 Moths that emerge as adults earlier in the year than Vapourer Moth typically go through their life stages more quickly - and typically overwinter as caterpillars. A winter search for 'cats' was high up my agenda. Accordingly, I snapped up a kind invitation from Butterfly Conservation'sSharon Hearle to join her, Breckland moth-expert Graham Green and Abby, a UEA MSc student, to search for Lunar Yellow Underwing caterpillars in the Brecks. This is a nationally rare moth that I have never convincingly seen as an adult - I've had a couple of candidates, but nothing that unequivocally met the grade. And so it was that four people crawled around a sparsely vegetated Breckland reserve on a chilly night, torch trained ahead of us just above ground level and bottoms pointing skywards. What the odd nocturnal dog-walker thought of us is unclear. Here's one of the Lunar Yellow Underwing caterpillars we found. They were teeny and - to Sharon's surprise - few in number compared to other sites that she and Abby had surveyed. Perhaps grazing ponies here had inadvertently munched many of last year's offspring? A risky business, these early stages of a moth's life...

Well, not Early Moths - as in the species which should find its way to my garden moth-trap in the next few weeks. But rather the early stages of a moth's life. As you may recall, I am researching and writing a moth-based travel narrative this year, to be published by Bloomsbury in early 2021. One of my New Year quests has been to discover how moths - insects that we typically associate with mild summer nights - cope with the vagaries of winter. Several hardy species do so as adults - indeed, the first moth of my year was a male Winter Moth on January 1 that was affixed to a supermarket window. Ben Lewis, Phil Saunders and I searched for female Winter Moths (which are flightless) at Strumpshaw Fen RSPB reserve. We drew a blank, but had plenty of males and the odd adult Chestnut too. Most fascinatingly Ben spotted this clutch of eggs, which prove to have been laid by a female Vapourer Moth. Remaining as an egg is a relatively safe way to survive winter.