The turn of the year has seen a few Caspian Gulls around Norwich - I think only the second or third winter the species has been seen here. The hotspot is just west of the city, in fields near the Ketteringham recycling plant. Here there have been at least two first-winters and an adult. One of the first-winters has also visited Earlham Marsh, inside the city boundaries and under a mile south of home; there has also been an odd second-winter here with black in the mantle. In addition, there has been a yellow-ringed hybrid at Longwater recycling plant; I saw this on 23 December but was sufficiently unimpressed to not even consider Casp. Dave Andrews put me right last week. Though down in the bloodstock record books as a 100% Casp, the clever gullists agree with Dave that it is a hybrid. Until the week, that was as close as I have come to seeing a Norwich Casp this winter. I finally put things right on 13th at Longwater, on my daily cycle ride from home. For once, the usually skittish gulls were relatively settled on the recycling-centre roof. There were also more Herring than normal (about 250), including three swarthy-mantled argentatus. Throw in an adult Greater Black-back (rare here), and my expectations were raised. So it was very pleasing when this second-winter Casp appeared at the front of the mob. This individual looks bang on. A cleanish head, shawl of neck-streaking, tiny pale bill tip but extensive pale base, lovely anchor markings on the scaps, clean dark tertials with white tips, and, in the words of one of my gullist-advisers, 'a pigeon chest and full nappy'. The image is nothing to write home about, but I'm showing it here to help document the various individuals we're getting. Despite lockdown, perhaps we'll break double figures by the winter's end? 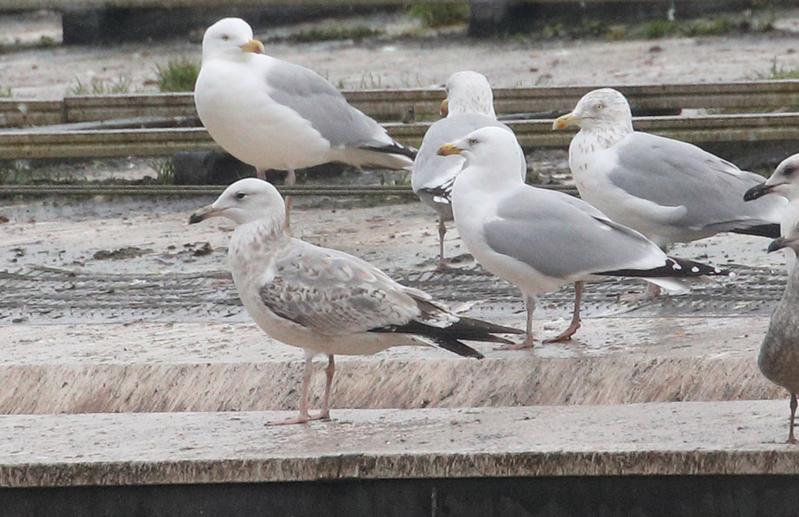