That's my mantra. October - sod work, go birding whenever there's a schniff of an easterly. Unfortunately, the first five bush-bashing, scrub-searching, woodland-whispering days on the north and east Norfolk coasts failed to furnish any real quality. Granted, I had five Yellow-browed Warblers and two Firecrests on one day in Wells, but those species had probably been around several days. There was nothing to twitch either: I briefly heard the Dusky Warbler at Warham Greens, but couldn't even get a glimpse of it. Yesterday, however, things improved. Lots of rain the previous night coupled with strong easterlies (that swirled into southerlies during the night) made for an arrival of thrushes. I birded Holkham in the morning, then joined Dave Andrews to bird Warham Greens (briefly) and East Hills (more intensively) during the afternoon.

The whole day - but particularly the afternoon - was very exciting. Thrushes were constantly pouring over and pouring in - round a corner and you could flush a score of Song Thrush, Redwing and Blackbird from the tiniest patch of scrub. There was a large arrival of Robins - prompting much hoping of a Bluetail (or even, m dare I say it, a Rubythroat). Goldcrest were prominent too. Finches - particularly Chaffinch - were streaming overhead throughout the morning. This was proper autumn birding - where your spirits were constantly up and it felt like there was the chance of a rare at any moment. 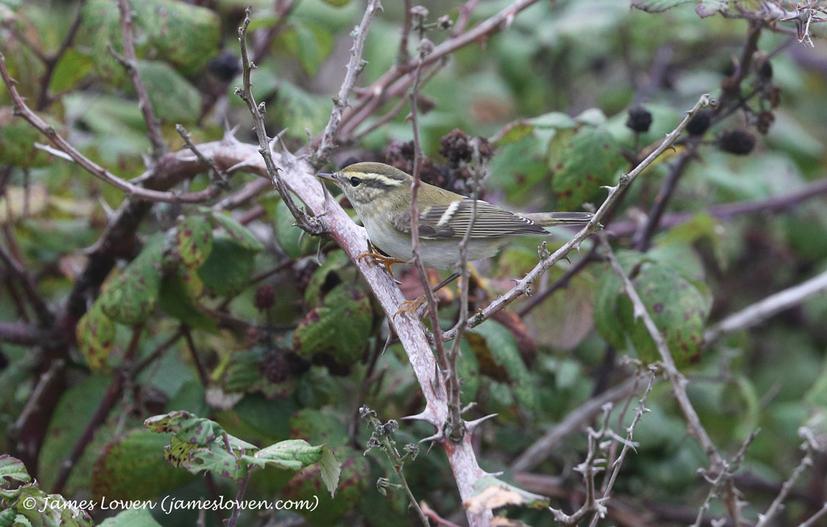 We failed to find any rare, but the list of nice birds was deep. Woodcock and Jack Snipe flushed. Five Lapland Buntings feeding on the salt marsh. Twelve Yellow-browed Warblers across the day, including the bird at the top of the page apparently fresh in at East Hills (it wasn't there as we walked out but was on the way back). The above Siberian Chiffchaff - vocal and perfect in plumage - that spent a few minutes late afternoon in an isolated bramble patch on the saltmarsh. Three Ring Ouzels. And this lovely eastern-type Lesser Whitethroat - lots of white on the outer tail feather and brown going right up the nape onto the rear half of the crown. It gave only the basic 'tak' call, but - interestingly - responded only to blythi call, not currucua!