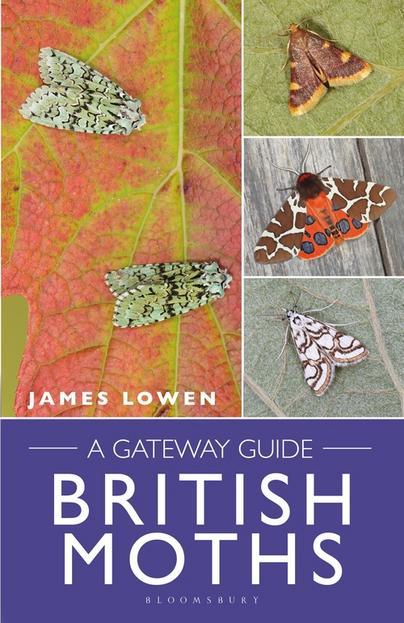 Every moth field guide – indeed, the vast majority of all field guides to all species (I can only think of a few exceptions) – presents species in taxonomic order. But this matters little to the beginner. What matters first, is what moth is flying on the particular night they are mothing. Some cracking apps and websites help with this, via a Flying Tonight search device. The Gateway Guide follows a broadly similar approach, grouping moths by season and then, within that seasonal selection, roughly the order in which they are likely to be encountered. 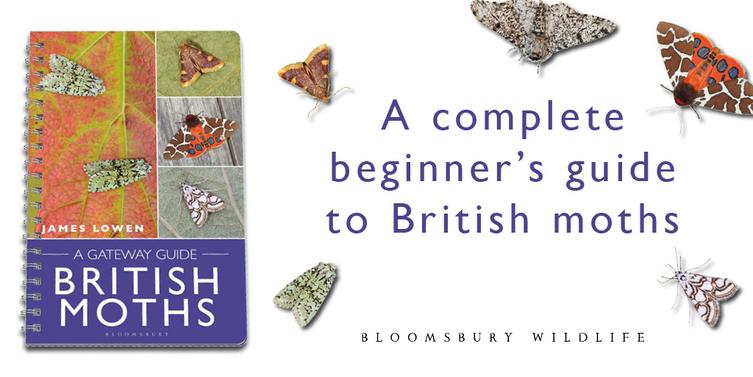 And so – with a fervent thumbs-up from publisher Jim Martin, over a Birdfair beer – the concept of a beginner’s guide to common British moths was born. Bearded and beaded, Jim framed the concept as a ‘gateway’ guide: an introduction both to the world of moths, but also to those fabulous comprehensive field guides. A starter for ten – a book to inform and inspire those setting out on a journey. A book that would make those early steps feasible and avoid the bewilderment that can stem from excess and can lead to abandonment. A book that would get people into moths – and encourage them to stay.

A great idea, perhaps – but one that brought its own problems, of course – none bigger than knowing how many of Britain and Ireland’s 2,500 species to include... and which. With bird field guides in mind, we decided on 350 species as being a manageable number and threw in another 150 that we would mention, often with an illustration. We decided to draw no distinction between larger moths (macros) and smaller moths (micros), and instead include both in the guide – albeit favouring the former, given that they are more likely to be noticed by the novice moth-er.

To make it into that 500, the moths had to be common and widespread enough to likely visit Josephine Public’s moth trap, wherever she lived. But what is common in Devon may not be so in Fife. Accordingly, I worked hard – with advice from kind moth-ers located across the country – to select a geographically representative set. There is no prefect grouping, of course – and there will certainly be cries from moth-ers somewhere about why species A is in but species B out. All the more so because the distribution and abundance of our moths are changing so rapidly. A decade ago, it would have been impossible to conceive of including Least Carpet, for example. But, despite the understandable protestations of one Scottish moth-er (who had never encountered it), it is now such an abundant species in urban areas in S Britain, that it had to be included. What will be a shoe-in in a decade’s time, I wonder? And what species will I need to omit at that point?

So, the selection of species seeks to make the novice moth-er’s life easier. But I go further in search of user-friendliness.

And then, in another break with field-guide tradition, the book groups similar-looking species together. Sometimes these follow taxonomic groupings, but often they do not. Again, from a beginner’s perspective, the primary objective is differentiating between species, rather than knowing their family. (Clearly the latter helps identification, but it is not a prerequisite.) 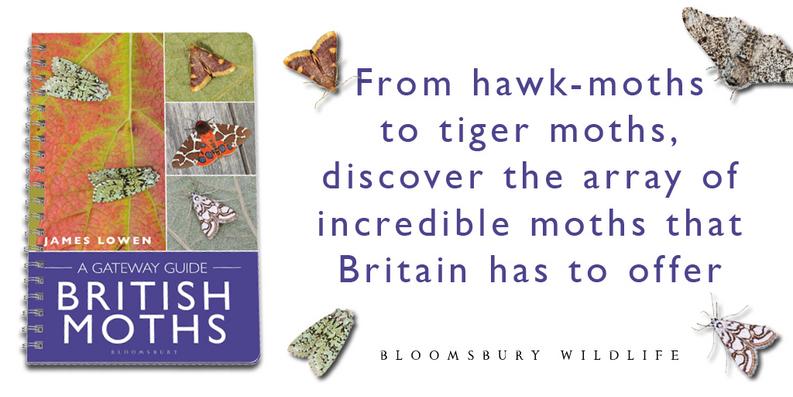 Well: yes, and no. I use those books routinely – and without them, I could never have come to love moths, let alone written my Gateway Guide. They are, in their various ways, both superb and indispensable.

But they are all rather problematic for those starting out in the confusing world of moths, trying to wrap their heads around two thousand-plus species, many of which look confusingly similar. It is a conundrum that I know very keenly, for it is barely seven years since I ran my first moth trap in our then London garden. The fundamental problem was that I didn’t know where to start. There were so many moths spread across so many pages. Tracking down which one might have been flying in May rather than August, in the right part of the country, gave me headaches. And then, I realised, the book I was using covered only larger moths – and there were lots of small things that were outwith its auspices, and thus remained unnamed and thus devoid of any prospect of personal relationship.

May the new book be your gateway to the world of moths (and those brilliant comprehensive guides). To buy from the publisher (a good way to help a writer), click here. Or you can purchase from all the usual places. (If you buy from Amazon, or even if you don't, it would be wonderful if you you;ld leave a review there...)

The book is clearly aimed at beginner moth-ers – I’ve thought about what my sister, in her first season of illuminating her London garden, might need to know. But the forensic approach to identification (those numbered arrows), will, I hope, life easier for slightly more experienced moth-ers too. After all, I can’t be the only one who has to strain their grey matter to remember particular moths each year...

In a third break from typical moth field-guide format, the moths are not described per se. There is no comprehensive articulation of colours, patterns and shapes – but instead a focus on the key features needed to differentiate species A from species B. Text and images dovetail via numbered arrows on the plates that connect to explanatory text that articulate the importance of the indicated features.

Each time I write a field guide – a book seeking to help people identify what they are seeing – I resolve to never write another one. They are a LOT of work. But, each time, I go back on my pledge – because it brings me joy to help people put a name to the animals they are seeing. And that is important because, to paraphrase something Simon Barnes wrote once – giving a name to something makes it easier to have an emotion al response (or even relationship with something). The same is true of people: if ‘that girl/guy in the end office’ has a name, it makes it easier to talk to her/him, get to know her/him, and – who knows – perhaps even end up spending the rest of our four-score-and-ten with her/him.

Today I have a new field guide published by Bloomsbury, British Moths: a Gateway Guide. As befits this year’s vibe, it is about moths. Why, established moth-ers will ask, when there already exist a suite of fine field guides to the moths of Britain and Ireland – written or illustrated by such luminaries as Phil Sterling, Paul Waring, Sean Clancy, Martin Townsend, Chris Manley, Mark Parsons and Richard Lewington? Aren’t those lepidopteran extravaganza sufficient?

So I resorted to photographing moths and sending them to a friend. Moth after moth after moth. Even so, I still misidentified plenty: I look back at my photo library from that initial season and squirm at the monikers ascribed. The recollection of starting out with moths is still very fresh.

I thought it was just me – my problem understanding moths. But as I travelled the length and breadth of Britain in search of tales about rare and remarkable moths (a quest written up in Much Ado About Mothing, published in May), I came to appreciate that I was not alone. I met so many people who celebrated the field guides’ brilliance but admitted that they yearned for something more basic to start with. Something that focused on the commoner moths – the ones that newbies were likely to catch – and spared the grief of tricky identifications and the confusion of rarities. 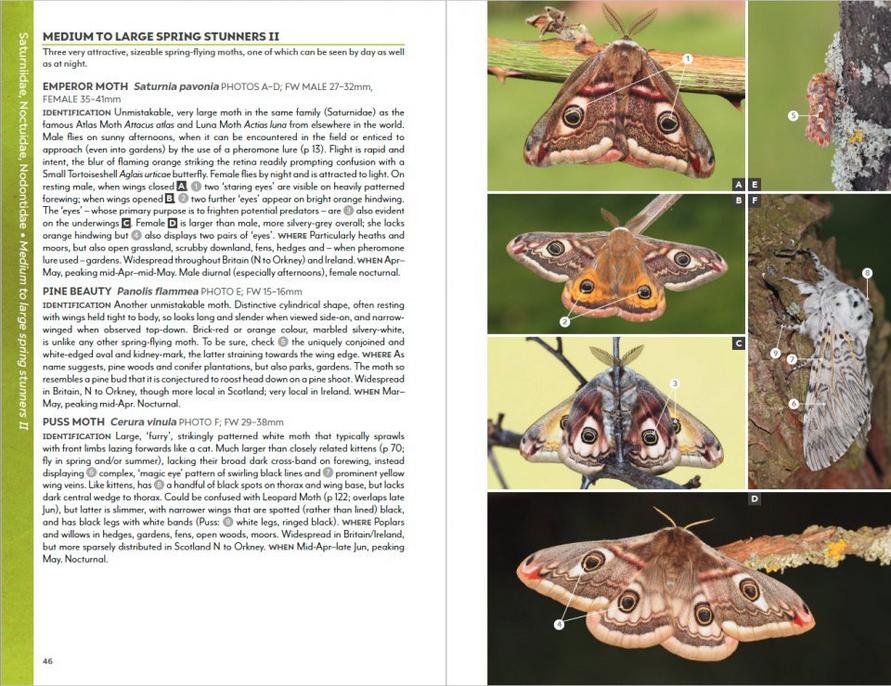 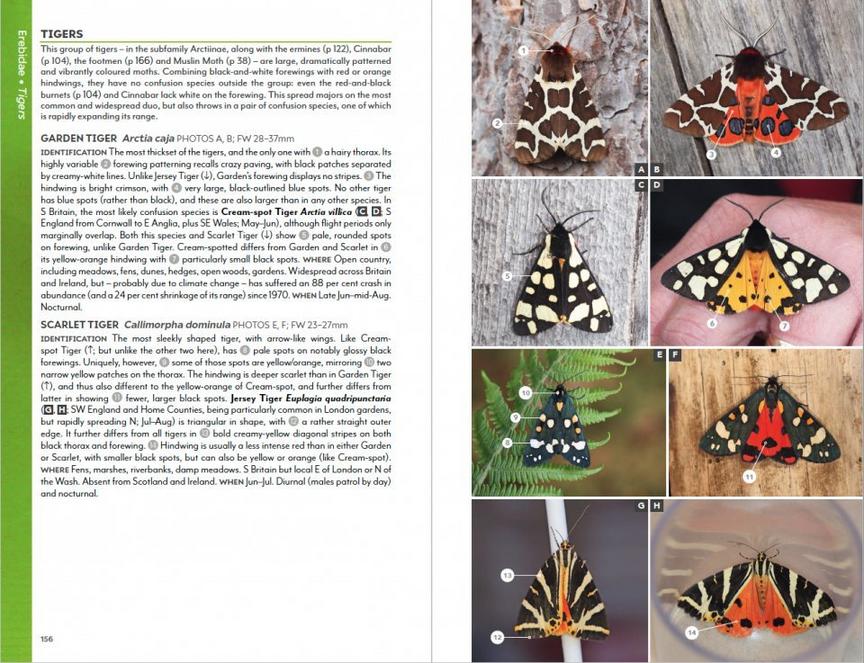 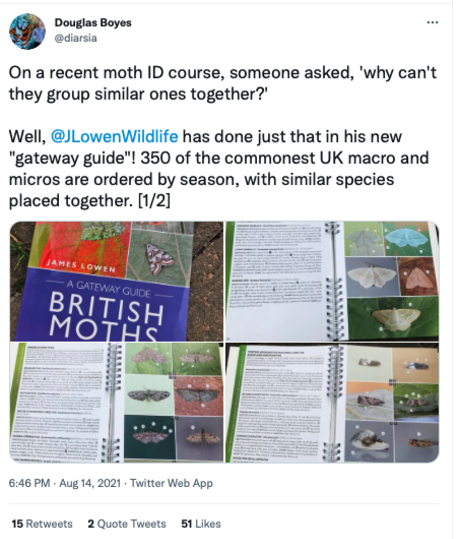