A single photo released of a possible Blyth's Reed Warbler at Holkham caused much internet interest, with the image displaying a grey bird with a massive bill. There were murmurings of Olivaceous Warbler sp. Max and I were only a few minutes walk away, so continued our route to see what the fuss was about. From Paul Marshall's other BOC shots, it was clear that this was an Acro, however, and so it proved when the bird hopped up. Perhaps it was a Blyth's Reed, as suggested? But its massive conk prompted some online observers to moot Large-billed Reed Warbler, so my phone was soon going crazy with people wanting updates and to see images (did I have a shot of the hindclaw? etc). The very long primary projection ruled out both species, however, and I and others swiftly reached the conclusion that this was simply a Reed Warbler, albeit a worn adult which presumably had lost some forehead feathers, thereby making it look very beaky. Nevertheless, a strange bird, so worth sharing a few photos.

“You look too sleepy to go to the shops, James. Why don’t you go back to bed?” Disshevelled, bleary-eyed and mad-haired, I had just emerged from bed after a 12-hour sleep – much needed on the back of three full days attempting to find Siberian rarities on the Norfolk coast amid the autumn’s most exciting spell of easterlies. Given that today was ringfenced for family time and chores, I was minded to agree. Then checked my phone. A hundred and fifty WhatsApp messages. WTF? One caught my eye, from Shetland writer Jon Dunn: “Rufous Bush Chat? Boom. What a bird,” it said. WTF? Panic stations. Flick through messages... Blinkin’ Nora, it’s under an hour from home. And found more than an hour ago. So I’m late. Headless chicken, stumbling round our kitchen, trying to locate optics, food, have a wee, imbibe caffeine, source clothes...

So, the Bush Chat was astounding. Bird of the year – indeed, my only tick of the year at present, given COVID-related decisions to stay home. But the other four days I was out this week were all about trying to find my own stuff. After a run of good luck earlier in autumn, surely a Bluetail was going to be mine. But it wasn’t. Indeed, I flunked badly. With 75 km of coastline walked, mainly alone and nearly always away from other birders, I failed. The best bird I found was a Pallas’s Warbler in Holkham which was actually rather startling as Max Hellicar and I picked it up on song. (Click link to listen.) I have never heard a singing autumn sprite, so this was special. And it was thrilling stuff picking through masses of thrushes and Goldcrests (particularly in the sueda, where you felt anything was possible... even a Bush Chat), a few Hawfinch, plenty of Crossbills (among many finches), presumed Eastern Lesser Whitethroats, YBWs (although I sensed they were left over from the previous easterlies, rather than being fresh in), Ring Ouzels and Redstarts. But rarer stuff – nothing. Instead, I was traumatised by Bluetail after Bluetail being found (three by friends, including one by Max when I was within a few minutes’ walk), plus Dusky after Dusky, and incessant Pallas’s.

Despite the failure to find anything, it was a thrilling week, then. And now, a return to reality: to chores, to work and tweenie-style backchat.

On my wanderings, I caught up with four additional Pallas’s Warblers around the place. What birds they are! My favourite was a confiding individual at Thornham, seen after I had checked the area where my August Greenish Warbler had been, which rarely ventured above knee height in scrappy vegetation and Shrubby Sea-blight. Gorgeous.

Bush Chat aside, I resolve not to twitch anything if it involved getting in a car. On foot, when I was already co-located, was fine. That approach allowed me to see Max’s Bluetail (indeed, we bumped into it mid-wood, away from where it was meant to be, which was heart-stop territory). As well as being visually splendid, it was deliciously vocal: click here to listen.

I was also close to Mike Buckland’s (surely) Stejneger’s Stonechat at Holkham when he found it, so trotted that way to have a look and contribute a few flight shots to show the underwing/rump. Faeces have been collected, but it's hard to see how these can come back as maurus. 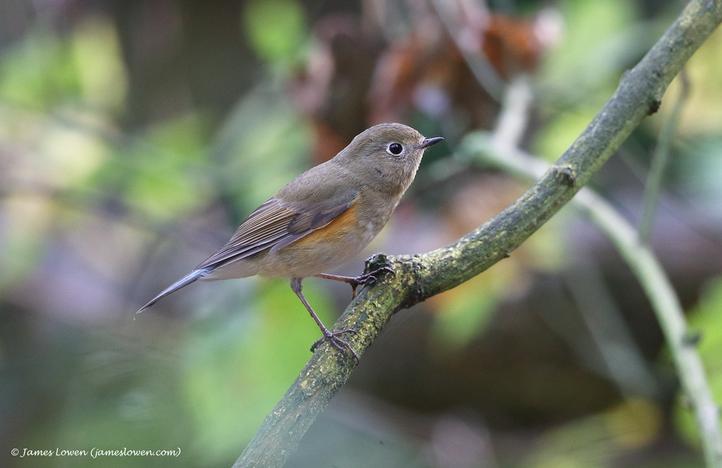