The male above looks rather shallow-crowned (no pronounced forehead bump, rather crown flowing into bill). It has a really deep-based bill, and a slightly swollen lower mandible. Smallish eye too. So far, so good. However, the lower-mandible bulge on the St Faith's Common bird is hardly pronounced. That said, it looks better to my eyes than the well-twitched birds at Gunners Park (Essex) a few autumns a go. My photo of the male from the pair is below; I was never that smitten with it being Parrot! Mark Golley, though admirably cautious, thinks this individual is the better fit for Parrot: 'this male feels closest to (smaller-billed) Parrot-type to me but I'd be nervous about going the whole hog just yet'.

I eventually made my way there yesterday. I found a flock of 17 crossbills, which gave poor views in awful light. Most that I got onto appeared to be Common Crossbill, though arguably with slightly larger-than-normal bills. Between two and four individuals intrigued me: 1-2 females and 1-2 males. I got reasonable photos of one female and one male, and wretched photos of the other two birds a few minutes earlier; it is plausible that the females and males each relate to one individual. I'll start with one of the 'other two birds'. This male was interesting, but more because of its behaviour than its structure. I photographed it snipping off a pine cone at its base, then flying a short distance with it. This is something I have only seen in the Santon Downham Parrots, and - from conversations with other birders - does seem to be a Parrot characteristic. But if it's a Parrot, it's a small-billed one. It's the left-hand bird below.

So, where does that leave us? Slightly in limbo, if I'm honest - despite several firms views on Twitter (e.g. from Andy Lawson, Sean Cole) that these are definitely Parrots. I'm also naturally cautious on claiming rares, particularly when difficult birds are involved. I think that the main male and female above are probably Parrots, but, if so, they are from a smaller-billed population and are certainly not classic birds along the lines of the well-photographed individuals this winter from Norfolk, Suffolk and Berks. I am also surprised that there would be a mixed flock; I think all this autumn/winter's records of Parrots have been in monospecific flocks. So that unsettles me. What I need is time to go back and photograph more individuals in better light - or for some of you blog-readers to do the same. Which means it is high time to give precise directions! 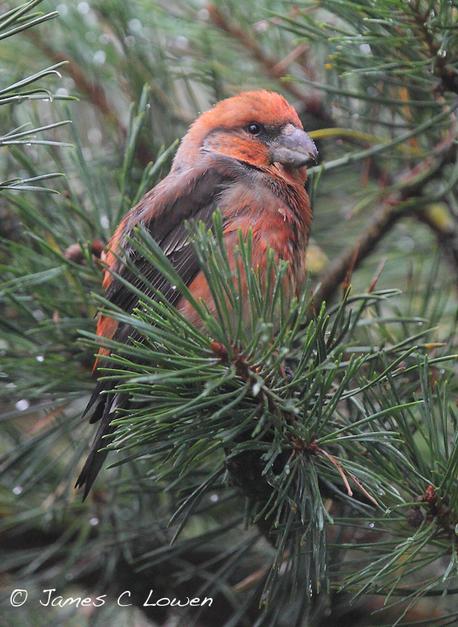 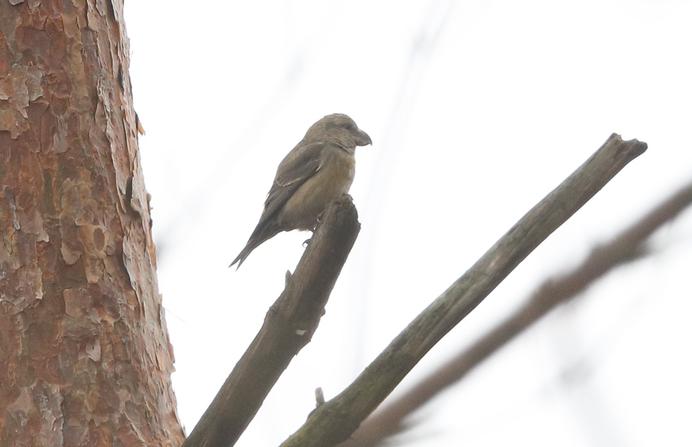 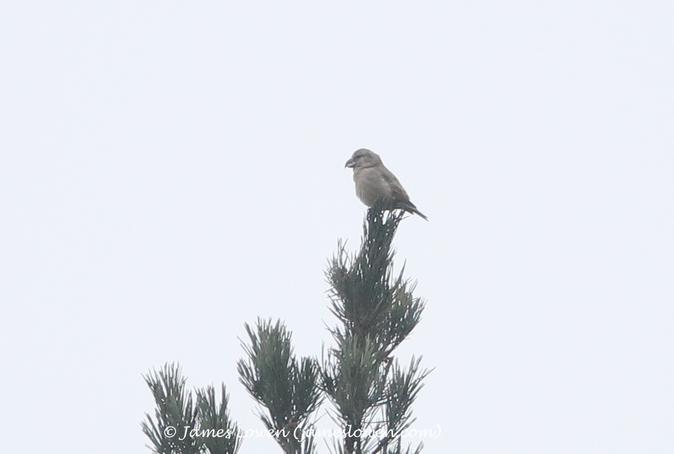 In mid-Jan 2018, Will Soar and I had a wander around a pine plantation north of Horsford, near Norwich, Norfolk. I thought it looked good for Parrot Crossbill, and Will mentioned that a possible female had been reported near there in late December. We saw and heard nothing. Fast forward to last weekend, when Phil Saunders alerted our group of Norwich birders to Peter Cawley's tweet about a dozen large-billed crossbills Loxia 0.5km west of where Will and I had looked. ​

Below is what I think was a different female (hard to tell as they were dropping down to drink). It has a decent whack of a bill (although again the lower mandible doesn't bulge excessively), though I really don't like that rounded crown shape (steep forehead)  and apparent large eye if it's to be mooted as a Parrot. At this point, you really do start to think about Scottish (i.e. Scottish Scottish)...

Onto the clearer candidates, which have been pretty extensively discussed with fellow Norwich birders, Mark Golley and briefly with David Bradnum. (I thank them all - and additionally thank Mark for allowing me to reproduce some of his comments below.) None of us are currently prepared to stick our neck out and call these as definite Parrots. We're heading that way - but not just yet. Caution... They are certainly not massive-billed classic birds, with a bulging lower mandible. But nor are they obvious Commons. They appear to be somewhat in-between. Scottish Parrots? Scottish? Deep-billed continental Commons? Or small-billed continental Parrots? These Loxia flummox.

I only got poor photos of the other birds in the flock, taken from distance (below). But the birds that appear in them look like Commons to me. Relatively small bill, domed head etc. However, at least one of my Norwich mates thinks these look alright for small-billed Parrots. But if that's the case, why do they seem to be calling like Commons (see below...)? Tricksy, these Loxia​.

The female below looks small-eyed, thick-necked and shallow-crowned - which makes me, personally, slightly happier that this is a Parrot. It has a decent broad base to the bill, but the lower mandible doesn't look particularly bulging. This prompted further caution from Mark, who said: "The female I'm actually finding harder to judge; it looks large-ish billed but I'm not sure I think it actually looks large-billed enough.' I don't have any images of this bird in a different pose - and her hunched demeanour (dropping down to drink) infers a bit of doubt on what are already subjective perceptions.

So... enough on structure, what about vocalisations? I got a couple of cuts of flight vocalisations through my phone, one of which I have uploaded to Soundcloud. The clearest calls come in the final 30 seconds of the cut. I have listened to this repeatedly, but I heard nothing in here that gave me any thought of Parrot (certainly no enthusiastic calls)... until Dawn Balmer picked up (from 24 seconds onwards) the deeper ​chop chop calls that sound to her like an alarm-calling Parrot. I heard these in the field - they were distinctly Chaffinch-like - but had not perceived them in the recording until Dawn alerted me. (Thanks Dawn!) The remaining calls sound like Common to me. I can think of three explanations for this: (a) they are all Common; (b) the Parrots were in the flock but not calling audibly; or (c) the Parrots weren't with the flock at this point (I recorded them after the birds had gone missing for 10 minutes, and only counted 14 or so birds as they flew over, so three individuals were missing). Half-baked scrutiny of the spectrogram (for which I am grateful for coaching from Dave Andrews, all the way from Tenerife) also suggests nothing in the 'shape' of the calls to prompt thought of Parrot, using the guidance in this blog. But this is the first time I have tried to interpret a spectrogram, so may be way off beam. Particularly now I have Dawn's advice...

Immediately north of Horsford village, turn west off the B1149 onto Haveringland Road. Ignore the car park on the north side of the road, and park in the one south of the road after 300m. The sign in the car park says the site is called St Faith's Common, although it is on maps as Houghen Plantation. Walk through a narrow strip of wood into the open area and follow the main path westnorthwest. After a couple of hundred metres, you reach the grid reference above. This is at the north end of a narrow strip of pines running south. The birds were best viewed in here, particularly at the northwest end of the strip, where they were dropping down to drink. This path is very muddy and waterlogged; wellies essential. When feeding the birds were inconspicuous (Parrot behaviour!) but were also flighty, moving several hundred metres west and north. I finally saw them heading north towards Haveringland Road and - following the initial observation around midday and views on and off until 12h45 or so, could not relocate them again by 13h40 when I had to leave. 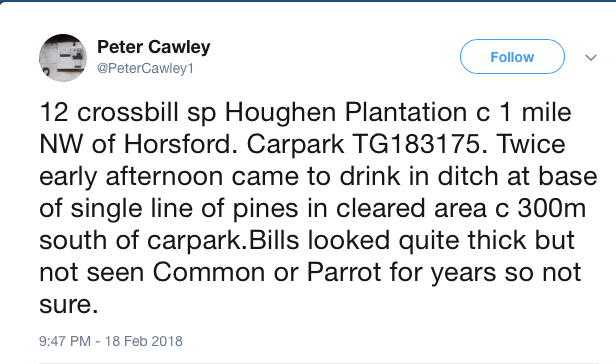 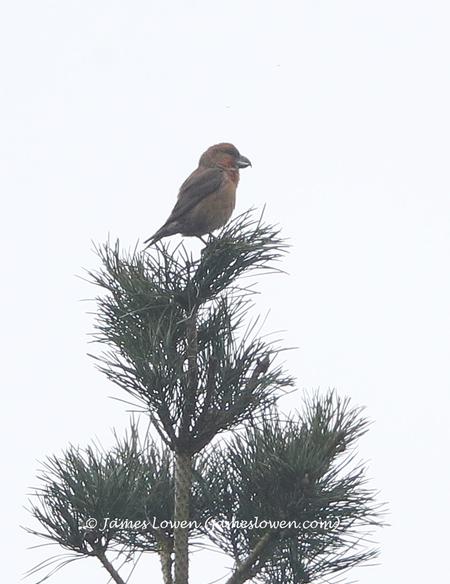 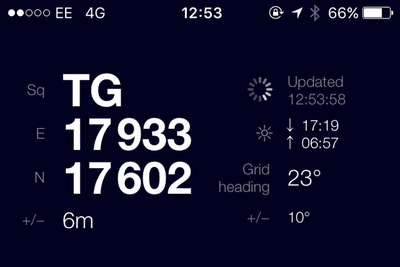