This followed rather a fun few days for local wildlife. Mothing has improved, thanks to mild southerly winds suggestive of spring, with Caloptilia semifascia, Ypsolopha mucronella, and Pale Pinion the highlights. Other cool small stuff has included Ant Damsel Bug (at least I think it's that), the first Honeybee, the first overfly (the honeybee-mimic Dronefly Eristalis tenax) and Clay-coloured Weevil.

I write this in a state of elation, having two fist-pumping encounters with a pair of Common Cranes (or with two pairs) as they flew fly over the garden a couple of hours ago. First seen over Thorpe in the east of Norwich, they were tracked by several local birders, with location and direction shared in realtime via our local WhatsApp group. 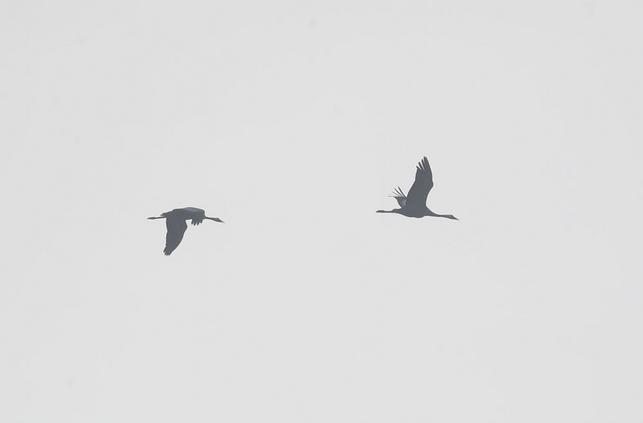 I took advantage of the milder nights to explore local woodlands and wetlands with the aid of thermal-imaging and infra-red devices. The former in particular - a remarkable gadget - revealed stuff that I would simply never have known to be present. The highlight was a Harvest Mouse that showed rather well (so well that I gawped rather than photographing it). The supporting mammalian case comprised a possible Yellow-necked Mouse at a known site for them (it was huge and ginger, but the chest wasn't seen), numerous Wood Mouse, several Water Vole, Red Fox, Muntjac, Hedgehog, Brown Rat and bat sp. The star bird was Woodcock (2+ seen; my first this influx), plus Common Snipe and roosting passerines. Exciting stuff all of it - and this technology is undoubtedly a game-changer. But, as is often the case with new technologies, it needs to be used responsibly. Not only in terms of disturbing wildlife that would otherwise continue their business unseen (although arguably it reduces disturbance, certainly relative to night-torching), but in terms of the potential impact on wildlife populations should economies of scale reduce cost such that professional wildlife trappers can readily access the technology. As one senior international conservationist suggested to me, trappers could use thermal cameras to clean out Indonesian forests of their remaining songbirds. That would be heinous; we need to reflect carefully and sensitively.