Eventually it was all too much, so the young Water Ermine (for which blog title, thanks to Phil Saunders) took a nap. And I took the cue to depart.

When home after moth-ing, I leafed through my copy of Nicola Chester'slovely book Otters in the RSPB Spotlight/Bloomsbury series (for which I have written about Badgers and Hedgehogs). Nicola is my favourite nature writer - a wondrous wordsmith who conjures natural beauty like nobody else. If you've not read her stuff, then pick up this book. It is lovely.

The duo spent a prolonged period on and around a waterside tree, the cub spending much time preening. It was calling almost constantly: click here to listen.

Moving to the far bank, mother and cub spent a lot of time exploring on the grassy slope above the river. The Mallards were rather worried - but the mustelids gave no indication of being interested.

There was plenty of in-water action, mostly within a yard of the near bank. 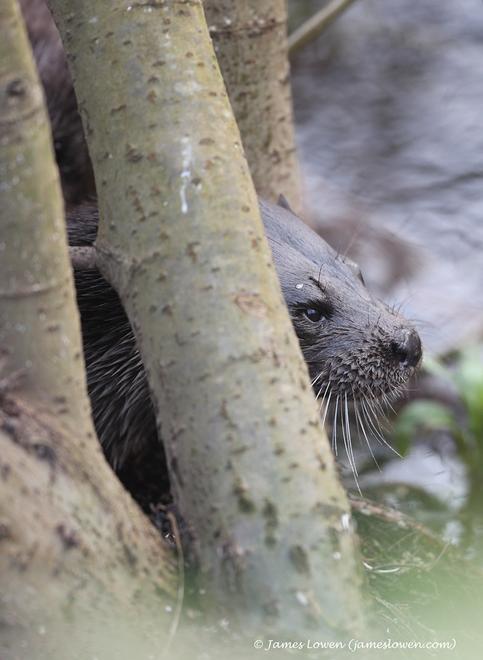 On Thursday, I had some #MyMothYear stuff to do in the Brecks. Having finished work earlier than expected, I took the opportunity to visit a riverine site. I was greeted by an abundance of vocalising finches - singing Siskins, Redpolls, Brambling and (surprisingly) a Hawfinch. My first serenading Zilpzalps of spring added to the chorus; so too Marsh Tits and Nuthatches. Then along the river, disturbing Water Rail en route, and watching a male Mandarin wing round calling (as if in display flight). But it was mammals I was after. Otters have been performing well here recently, so were my principal quest. And boy did they put on a show. A female and well-grown cub (I think, given behaviour) showed constantly for 1.5 hours at point-blank range. Walkaway views (and I only left because I had to get to a moth site for dusk). It the light had been better, the images would have been amazing. As it was, this was a cherished experience.