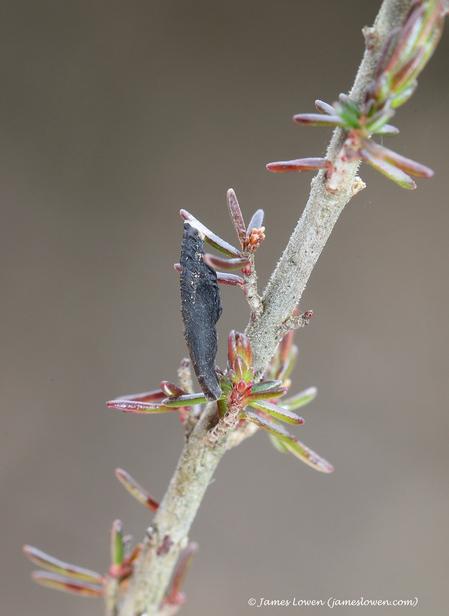 But these lovelies aren't the acquired taste referred to in the title. That accolade is reserved for the (apparently occupied) larva case we found of (what we presume is) Coleophora pyrrhulipennella(Sometimes referred to as Ling Case-bearer). For the uninitiated (i.e. sane), inside this black, plant-like case is a moth larva. It is very sparsely distributed in Norfolk and I confess to getting an unexpected frisson of excitement when spotting it (and realising that it was animal rather than plant). As I say, acquired tastes...

I have written previously about my initial antipathy towards micromoths and my eventual acceptance that they are wondrous entities. Over time, I have become rather smitten by the minimoths but, even so, acknowledge that they can be acquired tastes. Today I put aside paperwork and emails to spend late morning on a Norfolk heath where Louis Parkerson recently found 20+ Incurvaria pectinea, the males of which have gloriously fulsome antennae. It took a few minutes to locate some but, every time the sun shone, the air around young birch saplings above springy ling was dancing with males (in total at least 30). We also saw a few females, watching two lay eggs on the underside of fresh birch leaves, and felt we should avert our eyes at the sight of a mating pair. This is a bizarrely underreported species in Norfolk, at least in terms of adults, of which there have been only five county records from 2004-2020!