"Don't be size-ist!" The protest came from 'Wingman' Will Soar three or four years ago, and - in his honour - this blog is dedicated to Will's dad, who I was recently touched to learn is an avid reader (the avid reader?) of this blog. The Wingman was referring to my then disdain for micro moths, the smaller and usually more confusing swathe of mothdom. Over the years, I have gradually got to grips with micro moths. Although perpetually a novice, I now spend more time looking at - and trying to work out the identification of - 'micros'. Usually my suggested identification fails, but the kind folk on our local WhatsApp moth group soon put me right. Always learning... One of the joys of micro moths is that some are so tiny ("don't be so size'ist!") that many people ignore them, which leaves loads of room for discovery. One such find last week was a huge population of Isophrictis striatella (below), a nationally scarce species that I have only seen once previously, having caught it earlier this year in my garden. On a flower-rich tract of sandy-soil wasteland - the sort that is bound to be built upon shortly - I found double figures of this species on each of ten Tansy plants I looked at. A hundred-plus, for sure, but quite possibly an order of magnitude more than that given the density of Tansy flowering. There was also a handful of Dichrorampha flavidorsana, another Tansy specialist. Indeed, there were swarms of micros on a balmy evening, so I alerted said WahtsAppers, prompting Max Hellicar and Jack Morris to trap the site a couple of nights later... and find a Red Data Book macro moth, Tawny Wave. What else might exist here? And what can be done about the site if it does indeed suffer from planning permission? 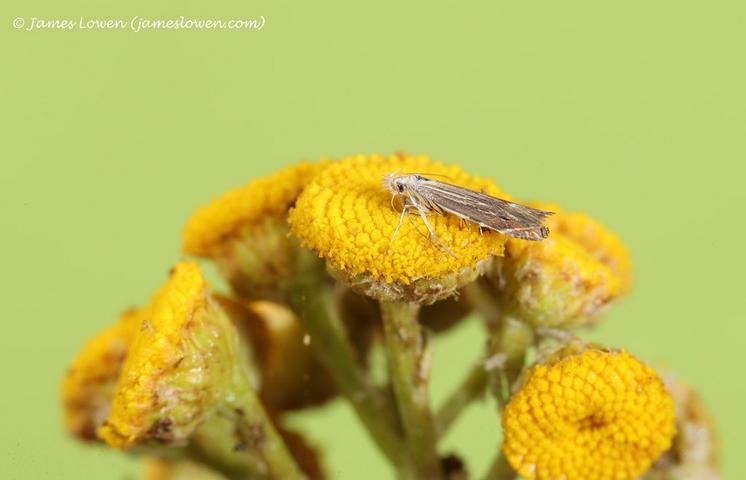 Anyhow, the night of my wedding anniversary also came last week and conditions were perfect for a quality night nothing, Clearly, I could not abscond into pastures wild, so resorted to running three traps around our garden - including one inside the mesh circumference of my daughter's trampoline, the idea being that moths would adhere to the black netting to await my discovery in the morning. And there were plenty of moths to get through, with 365 individuals of 85 species representing a most exciting level of stay-at-home mothery. And the most exciting critters - including three new species for me, one further potential new species for me, three further new species for the garden (including a species new to science as recently as 2017!) and a Nationally Scarce species - were all micros. What a night mothing! As I am rapidly learning, these Little Things matter.