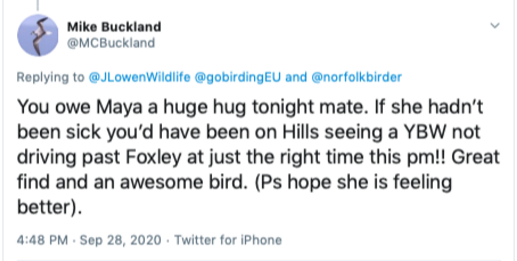 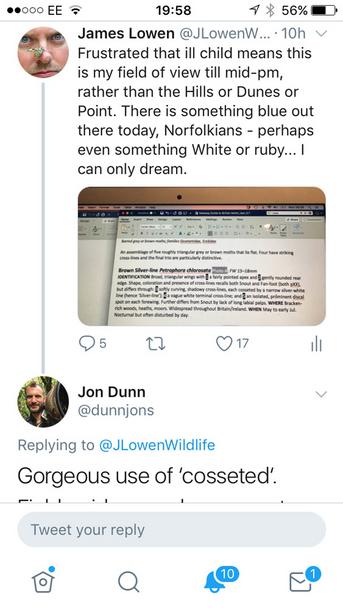 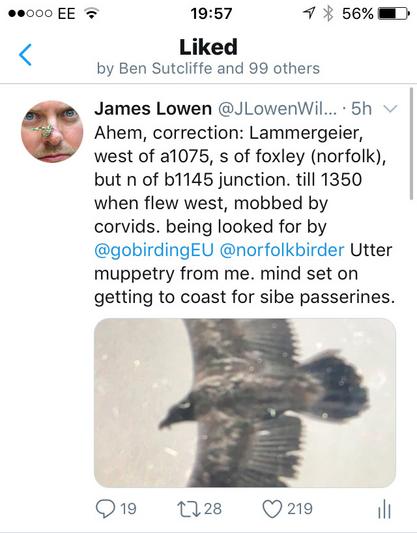 As I zipped to the boot to put connect lens and camera, the bird flew over the road – big heavy wingbeats still not ringing alarm bells.

After a couple of minutes, the 'eagle' landed towards the back of the field, corvids still berating its existence. I took a few more snaps and looked at it briefly through my bins – it was a rather distant blob, though there was a sense of contrastingly black head and small bill. And still no alarm bells. I had no scope to improve views and - as a friend perceptively commented later - the existence of Wight White-tails has rather taken the edge off the eagle experience, meaning that you don't watch them as critically or fervently as we used to.

Bearded Tit is a spanking little reedbed passerine. Bearded Tit is also the name of comedian Rory McGrath’s autobiography – self-deprecating humour to indicate that he’s a birder and a bit of an arse. Today above all, I know how McGrath feels.

I was due to be birding the Norfolk coast all day – enticed by the promise of Sibe on the back of a weekend of heavy weather. But an ill, off-school daughter put paid to that. I sat at home, fuming and frustrated, until 13h30 when Sharon managed to get back and relieve me from caring duties.

I then sped north, dance music blaring with the sole aim of getting to Wells as fast as slow tractors would let me and then birding till I was blue(tail) in the face. Sibe Sibe Sibe, was all I was thinking.

As I mentally plotted an efficient route around the woods, to take in potential places for Radde’s, OBP and Old Bluey, a huge bird flew over the road just shy of the village of Foxley. Being mobbed by corvids, there was only one thing it was going to be, surely. One of the Isle of Wight release White-tailed Eagles. After all, I’d had one fly over me a few miles north last month – and this was likely the same bird. I pulled in and grabbed a quick phone pic without really looking at it, other than to think: ‘That tail looks long; it must have regrown since I last saw it. And [a liminal thought this, and the bounds of my consciousness] it's a bit grey.’

Head hanging with shame, I was relieved when Mike McCarthy (who was already en route for the eagle), relocated the mighty bird a few minutes later. Over the following couple of hours of wacky races around the county’s cliff-less, crag-free agricultural plains, it seems that quite a few people coincided with this first for Norfolk (BOU categorisation put to one side). That at least brought some solace. Hopefully the bird will be relocated tomorrow and please more people similarly. 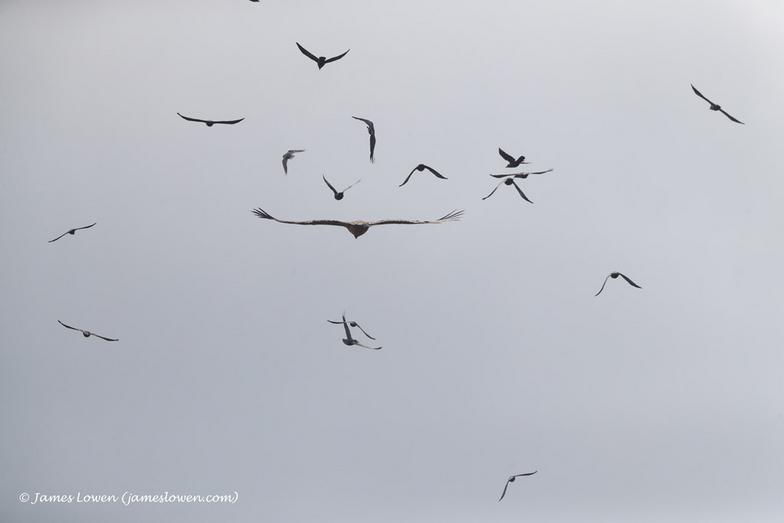 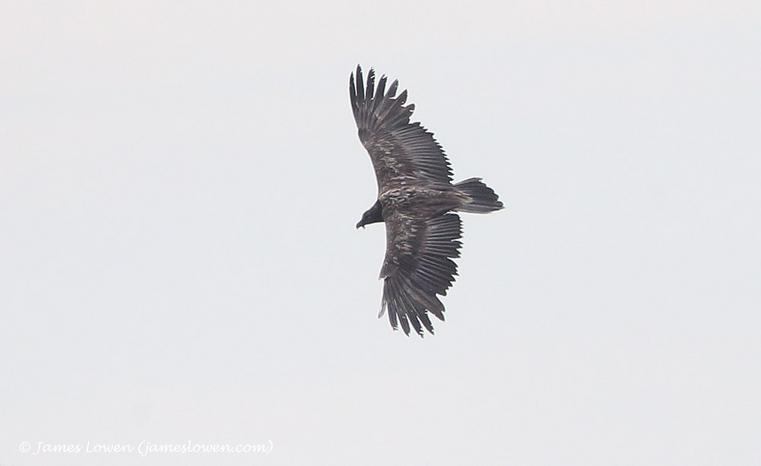 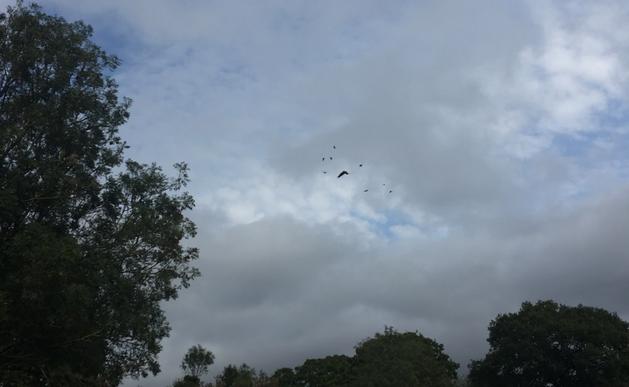 How could I have fecked up so badly? It is literally the biggest birding mistake I have made. Well, several reasons - and all learning points. My mind was focused on a single objective: coastal rarity-finding. This tunnel vision, and associated time pressure, meant that I had looked but I had not seen. Lammergeier simply wasn't on my radar, because the bird (I understood) had departed Britain. I had thought but had not reflected. I had assumed – a cardinal sin – and should never have done so. I had failed to question, failed to exert critical judgement. With my contact lenses in – and being of an age when I need reading glasses but not having any – I couldn’t focus my eyes on the photos I had taken, so didn’t even bother. How careless. How unaware. What a Bearded Tit. 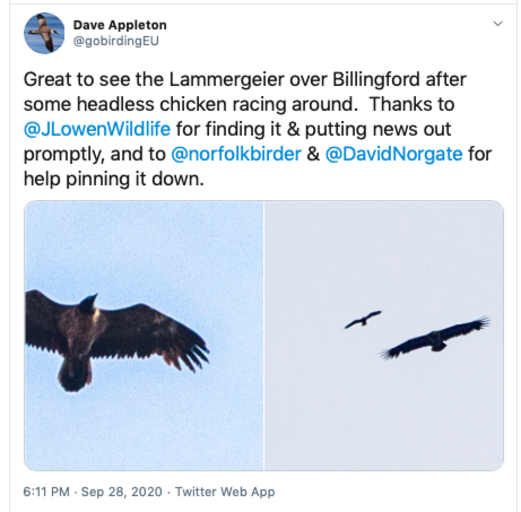 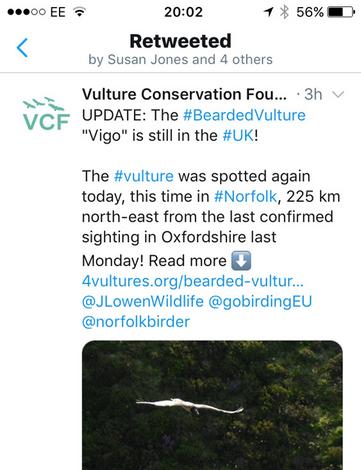 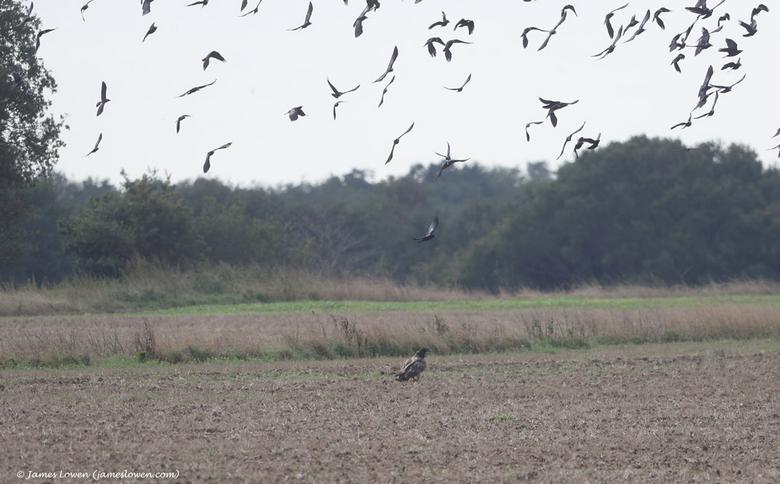 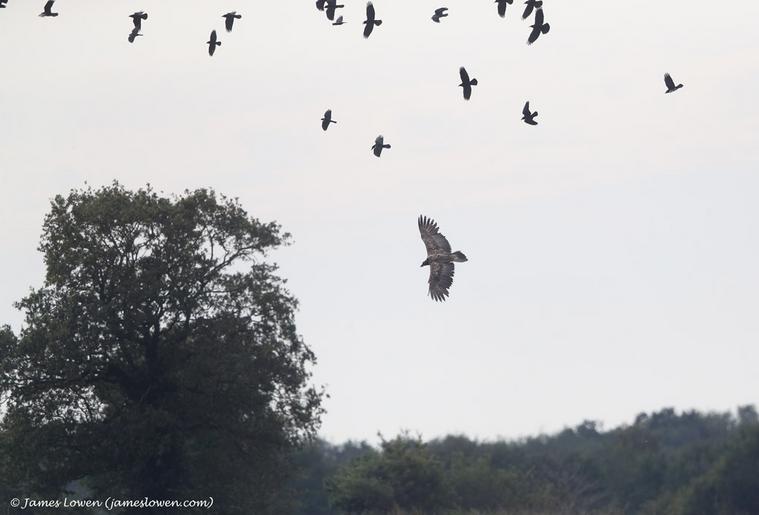 I messaged our local WhatsAppers with a BOC pic, put the news out, and tweeted a pic too. The bird took flight and beat a path west-ish. I left, driving north at pace, to make up lost time. A few minutes later, I glanced at my phone screen. And saw various messages (and one Twitter response) decrying my identification incompetence. No eagle, they all said, but the Derbyshire Lammergeier.

I screeched to a halt for the second time in 20 minutes. Of course. Of course. Oh jeez. I had understood that Vigo the Peak District Bearded Vulture had not been seen for a week, had last been glimpsed somewhere in Oxfordshire and was presumed to have departed southwards to find some proper mountains before winter set in. Evidently not the case. I swiftly (if shamefacedly) put out news of the correct ID, continued north (to fail to find any Sibes...).