If confirmed (a major caveat, of course), this candidate Red Data Book species would be the first in Norfolk since the late 19th century. Justin confesses to being most excited when he looked at the absence of dots on the map on the ever-outstanding Norfolk Moths website. Here's the 'before'...

In reality, the record is not entirely unexpected. There has been a rash of records in recent years in Suffolk, with suggestions of a northwards spread. It doesn't take a great deal for such mobile creatures to wing their way a score miles further up the map... Arguably the same lack of surprise might be the right reaction to the garden mega that I DID manage to have last night. Given unprecedented numbers of Wood Sandpipers in North Norfolk (particularly) yesterday), several of our Norwich crowd were on the listen out for flyover waders last night. I was among them, sitting out watching the moth trap, waiting for an Oracle or a Pale Shoulder... Around 23h00 Dave Andrews(inevitably) heard and recorded one fly northnorthwest over his garden. Brilliant - but tantalising for me, as Dave lives close to me, but NNW is the wrong direction for the bird to come my way. Nevertheless, ten minutes later, I hear a distinctive call and - GET IN! - there's a Wood Sandpiper flying west-ish over the garden. Given the numbers around, it could easily be a different bird to Dave's, but my hunch is that it shifted direction over the river valley, swung round and came my way. A garden mega indeed! 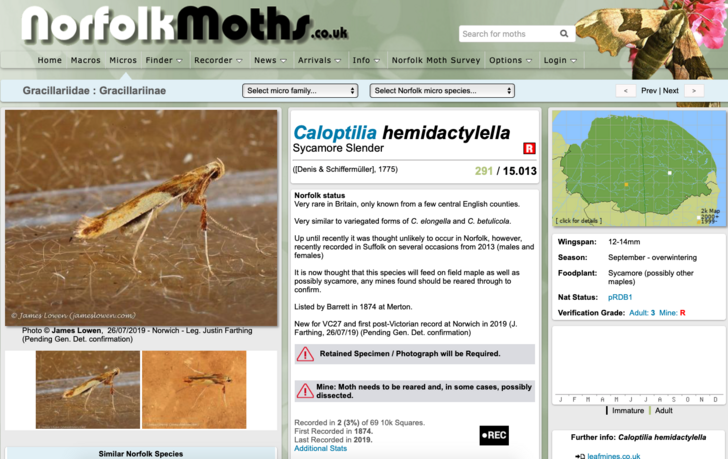 Good things come in threes. So another garden mega was on the cards. This afternoon's sun attracted swarm of non-moth insects into our garden. Among them was this eye-catching ruby-tailed wasp. The reddish thorax seems to suggest this one to be Hedychrum niemelai. If that's right (and I am well out of my depth here), it's a bit special - a candidate RDB species for a start, only recorded from a handful of 10km squares in Norfolk. Time to phone a friend, me thinks. 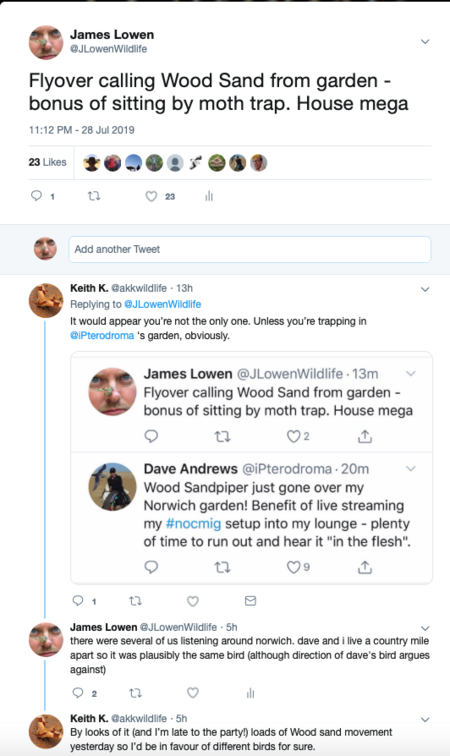 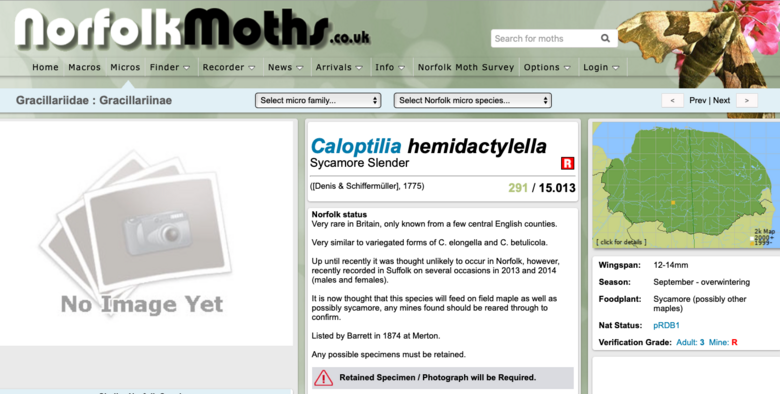 If you're going to catch a mega moth in your garden trap, the most likely month is July. It certainly proved to be the case for me last year, when I had Orache, Scarce Black Arches and two Dewick's Plusia within a few days in early July. This year, however, I have been travelling almost constantly - and have caught nothing of note at home. Unsurprisingly, then, the biggie landed in fellow moth-ers' trap. Justin and Annie Farthing have a quite wonderful house, but in perhaps the least likely location for a mega of any of our WhatsApp group of 30-odd local moth-ers. They live in an urban part of near-central Norwich, and their garden (though gloriously vegetated) is hardly the largest. But this does not deter Justin and Annie in the slightest. They have already surprised everyone (themselves included) with several species of clearwing, notably a very out-of-known-range Six-belted, and last week caught what appears to be Kent Fruit Piercer Grapholita lobarzewskii to lure. On Friday night, however, the couple excelled themselves, catching a micro that appeared to be Sycamore Slender ​Caloptilia hemidactylella. On Sunday, Lowen and Farthing daughters conveniently had a playdate, which provided me with an opportunity to catch up with the moth. Sure enough, it looks bang on for hemidactylella, and Twitter/email/Whatsapp contacts appear to agree.