There's another Mr Orchid, of course. Jon Dunn, currently writing a travel narrative about British orchids (yes, that is the book I wanted to write, but Jon got there first, and his will be brilliant). Jon flew down from Shetland as we were having a celebratory breakfast, and successfully twitched the Tongues that evening. Now that is a top effort. Tongue Stud.

Amidst the admiration of the orchids, plus small steps to prevent inadvertent trampling on the plants (which would otherwise have been a certainty as and when other visitors arrive), there was discussion of the colony's origins. This was aided by a local dog-walker who - with her botanist husband - was an orchidophile, and had also surmised that the tongue orchids were on her favourite meadow. Some observations from our collective musings. A colony this big must have been here several years. The species reproduces vegetatively which could explain a rapid increase in numbers. But what about the provenance? It seems that there are no orchid-growers within at least 40 miles, so the seeds certainly didn't blow here (as was the case with tongue orchids in Kent 20-ish years ago). It's an odd site for a deliberate planting. A couple in the nearby town apparently go on regular orchid holidays in Europe; might they have inadvertently brought back seeds and dropped them at the site? Unlikely, but at least conceivable. So... origins unknown, but very potentially pukka - and certainly amply naturalised. Cue a gaggle of very happy 'orchidists'... 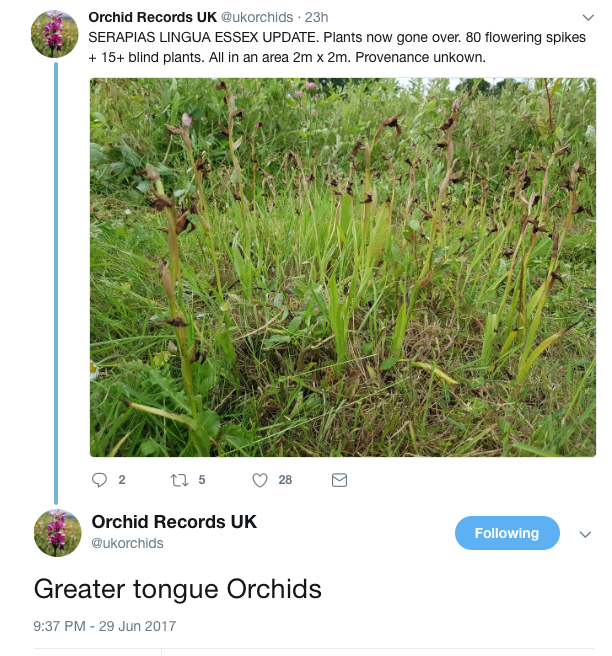 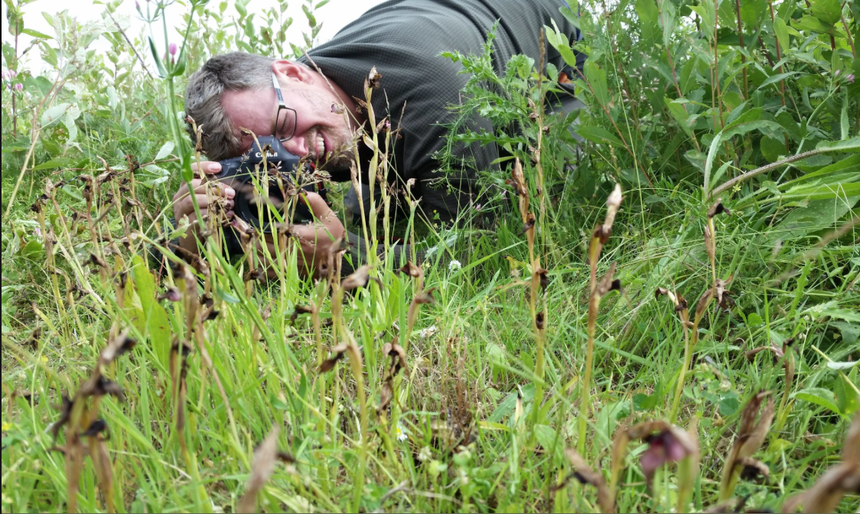 Sean's tweet sent me to a blind panic. Greater Tongue Orchids - a Mediterranean plant - in Essex? The first ever in Britain? A whole colony of them? These I had to see; I could barely think of anything else (even the reappearance of the Black-browed Albatross at Bempton made no impact).

Only three or four retained even vaguely serviceable flowers, but these were most pleasing indeed.

Even with Mike's detailed directions and a grid reference, it still took us half an hour to track down the plants. (My awe for Mike's eyesight and dedication will never cease.) When we did, it was clear that (a) there were a lot of plants (we eventually counted 80 flowering plants plus many non-flowering) and (b) they were all but over. 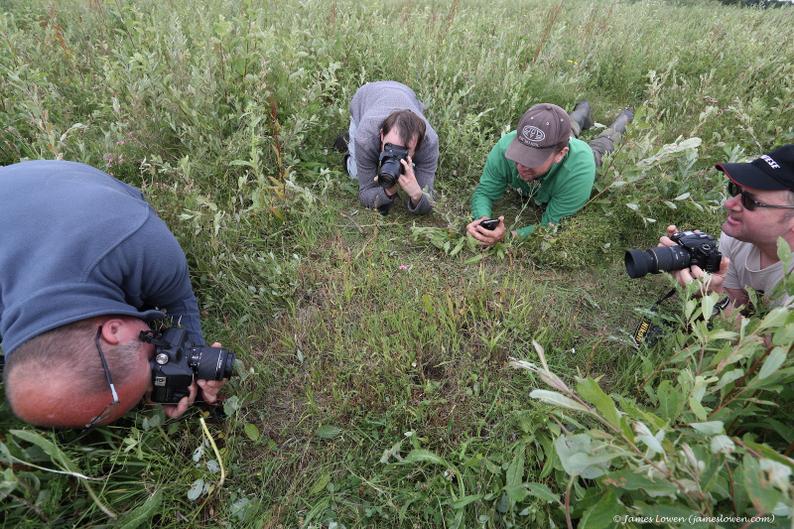 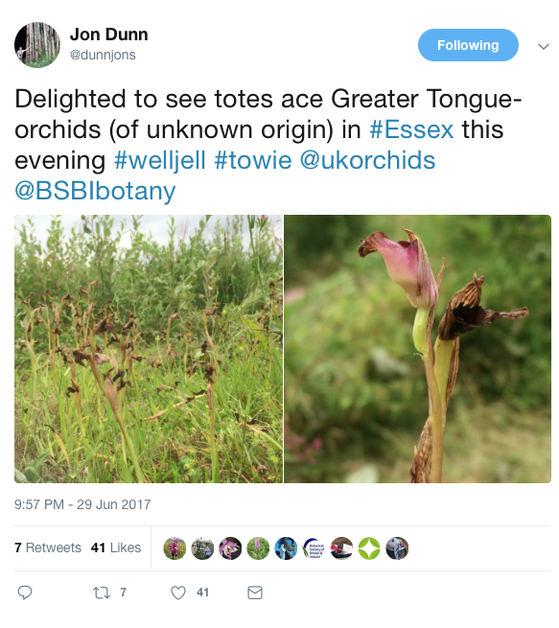 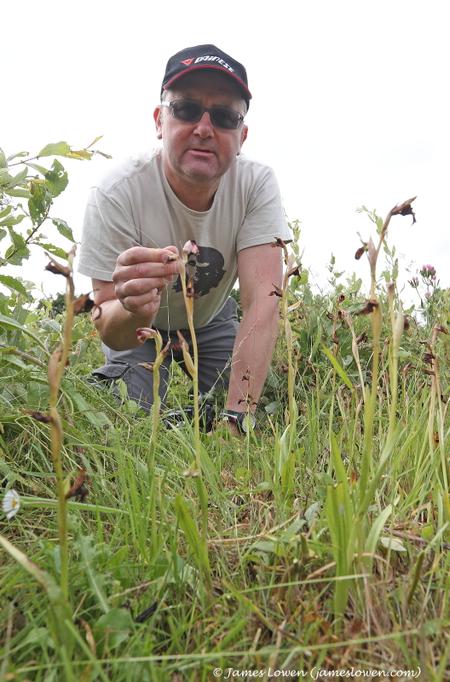 This was the tweet, from orchid guru Sean Cole, that prompted the year's most startling botanical discovery - based on photographs posted on (then swiftly removed from) Facebook.

Sean is not merely an orchid sage. He's also very kind. He promised to tell me the location if he managed to discover it. He did so. Another orchid genius - indeed, one working with Sean on a forthcoming Princeton WILDGuide to British orchids - Mike Waller, then entered the fray. Searching the site on Wednesday evening, Mike somehow managed to locate the colony of Greater Tongue Orchids. Sean rang me with the good news. Will Soar, Dave Andrews and I were on site early the next morning, and were soon joined by Chris Lansdell and Sean. 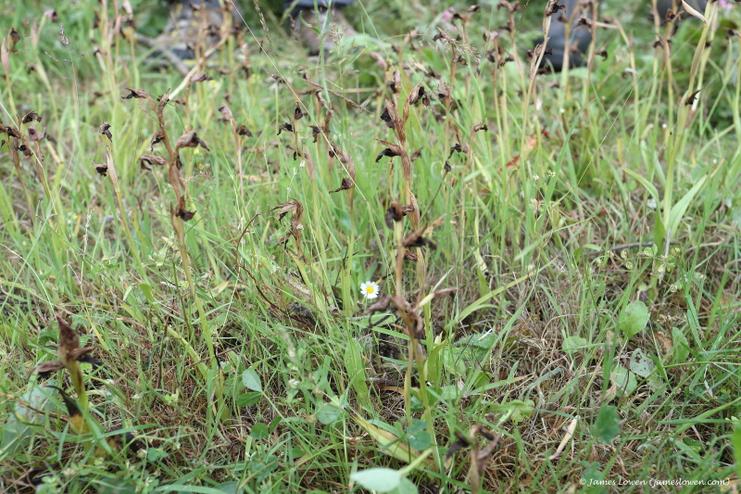 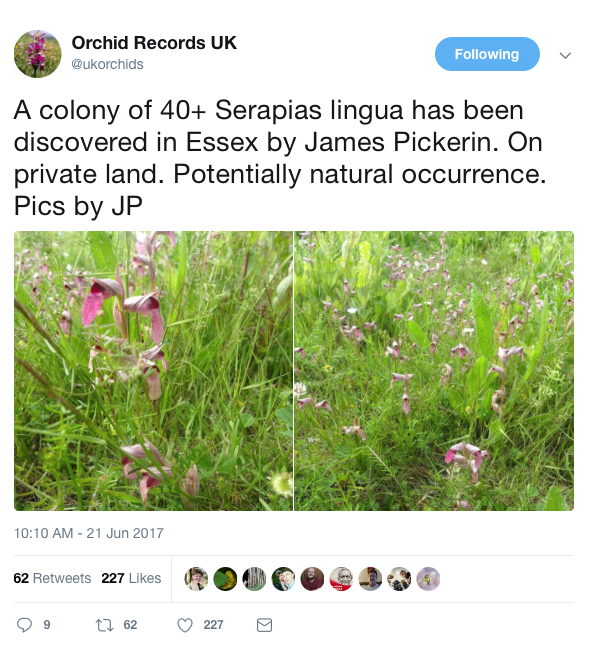