Last night, Wingman Will and I finished our third major trip to Kent (for July, see here; for June, click here) as part of #MyMothYear. It was gruelling - four long nights with the traps, grabbing a few hours sleep each morning before the Ashes started. But it was magical. We had seven main targets for the trip - all rare resident macros: Triangle, Clay Fan-foot, Olive Crescent, Dusky Hook-tip, Straw Belle, Scarce Chocolate-tip, Pale Grass Eggar and Toadflax Brocade. The only one we failed to see was the Fan-foot - and we found all but the Brocade ourselves. Furthermore, we jammed in on a number of other rare breeders and an array of rarities - largely through the offices (pots and fridges) of Kent's generous mothing community plus visitors (e.g. Bernard Boothroyd, Josh Jones, Nick Green, Ade Jupp, Sean Clancy, Jacques Turner-Moss, Owen Leyshon, David Walker, Ian Roberts, Darren Taylor, Dave Andrews, Sarah Morrison, Barry Banson, Martin Casemore, Gill Hollamby, Craig Edwards), to whom extensive thanks are due. We trapped near Folkestone, in Orlestone Forest, and at both Dungeness Long Pits and RSPB Dungeness. We benefitted from the products of traps at Hythe, around Dungeness, Ruckinge and Sandwich Bay. 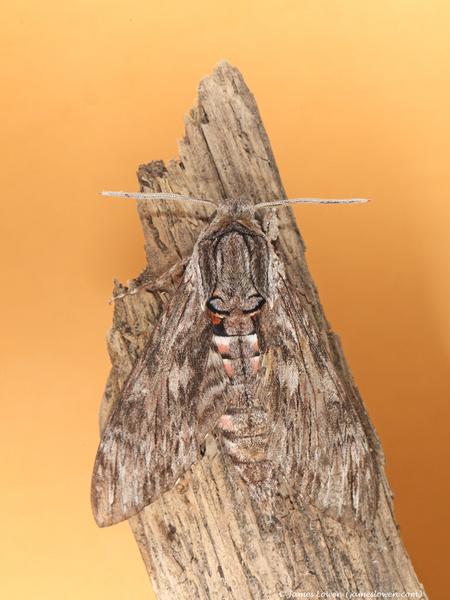 Let's start with the roll-call of rare and scarce migrants: Tamarisk Peacock (20th UK record? Quite a story this one, which involved Owen Leyshon climbing a ladder to extract it from below the guttering on his house), 2 Orache, 2 Pale Shoulder, 2 Ancylomia tentaculella (a giant among grass-veneers, with only 6 UK records before this year), Dewick's Plusia, nearly 100 Acrobasis tumidana (including an astonishing 92 one night in Orlestone), Golden Twin-spot, Convulvous Hawk-moth, 2 Scarce Bordered Straw, and 3 Dark Crimson Underwing (2 of which were in suitable breeding habitat, apparently tempted to my actinic - and adjacent rucksack! - by wine ropes) . Phew! A fairly fresh Pine Hawk-moth was only the 20th Dungeness record, prompting some talk of whether it could be the Doppelgaenger southern species, only discernible by gen det. We also caught or saw a few Cydia amplana - so-called Vagrant Piercer. 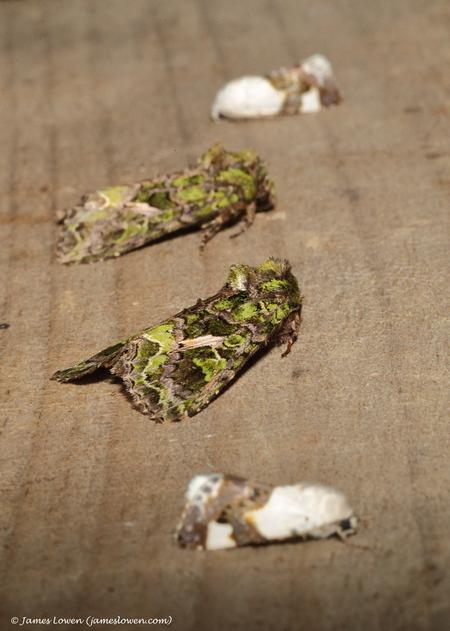 These migrants were a bonus because it was the rare breeders we were actually after. The target species were split between inland mature woodland and coastal shingle. We managed Olive Crescent (which I had only seen once previously, in a pot) and Dusky Hook-tip (a recent, stunning colonist - of which we caught three) near Folkestone, and (a sadly moribund female) Triangle but no Clay Fan-foot (too late?) at Orlestone Forest. Dungeness produced Scarce Chocolate-tip (one caught locally that was sat in the fridge when we arrived and, far more excitingly, one caught in our RSPB Dungeness trap - or, rather, on the outside of the trap...), Pale Grass Eggar and Toadflax Brocade (one escaped the Dungeness Obs trap before Will could see it, so he was relieved when Gill Hollamby brought one in from Tenterden; this is a species I caught a few times before leaving London and which may have quietly colonised Norwich, not that I have seen it there). Straw Belle eluded our cameras, but we found four on Folkestone Downs despite a gale. We also saw another Sussex Emerald​, courtesy of Ian Roberts: the species is having an excellent year on the Hythe Ranges. and we caught our own Pigmy Footman, which was pleasing.

We caught and saw a fair few other nice creatures during our visit. Catching more Bisigna (after our July success) was pleasing, and Dave Andrews spotting a Bloxworth Snout nectaring on a wine rope was exciting. After a couple of near-misses in early July, it was great to catch several of our own Langmaid's Yellow Underwings - and test the identification criteria on them. Trapping our own Dolicharthria punctalis (Long-legged Tabby) was pleasing: I only ticked this species at Portland last month. Three Breckland-type Plumes at Dungeness were complemented by a Wood-sage Plume. Ancylis oblitella was a local speciality, albeit one not caught at Dungeness for the past couple of years. Then throw in fifty or so Cyneda dentalis, numerous Webb's Wainscot, several Oncycera semirubella, three species of Ethmia, Anania verbascalis, Sitochroa palealis, ample Mullein Wave, a few Dotted Clay (new for me!), my first Acleris literana (not quite a lichen-patterned individual but pretty nice) and two Channel Islands Pugs (courtesy of Sean Clancy; you don't think I would have taken the time to identify them, do you...?)... and you have a adrenaline-rich invertebrate cocktail. What. A. Trip.