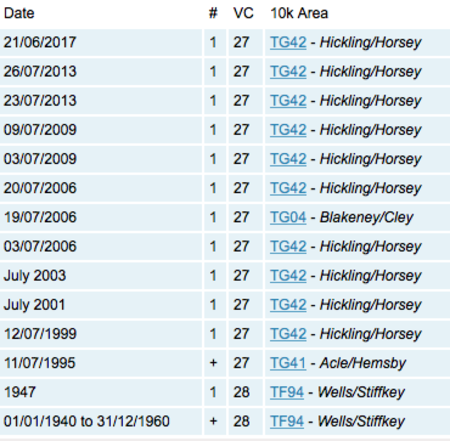 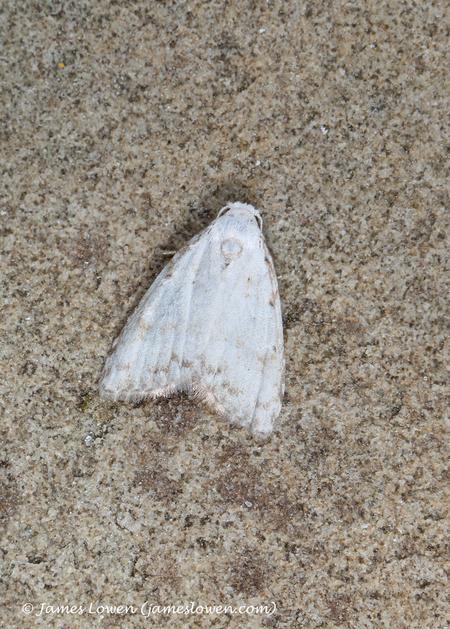 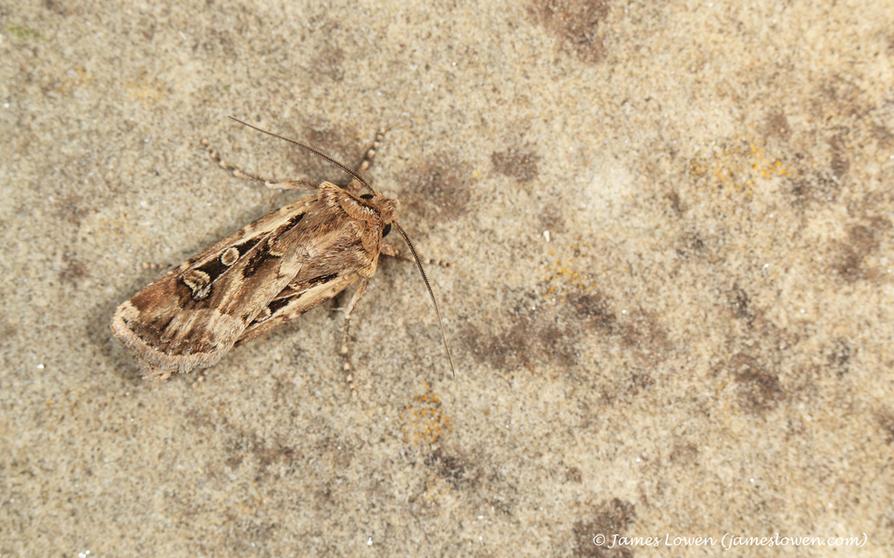 Before I know it, my stomach is rumbling. It's lunchtime. I wander inside to scavenge some leftovers. While the microwave heats up last night's pasta, a small moth catches my eye on the inside of the kitchen window. It's small and vague tortrix-like in shape,. If it's a micro, it's tempting to leave it - and it's so pale it must be worn. So one to ignore. Or not... I have resolved to be a Better Man when it comes to micros. So I grab a pot and confine it. And then look at it. And realise that it is not a tortrix, or indeed a micro. Its shape is rather like that of Least Black Arches (which isn't flying any more) or Short-cloaked Moth (which is). But it seems smaller than either species, and is really pale. The paleness doesn't seem to be down to wear. In fact, the mystery moth seems quite fresh. My mind races. What's that thing that Neil Bowman keeps trapping out at Eccles...? Is this that? No, it can't be. Too rare, Shirley. But it doesn't half remind me of it. I grab a book and start to think that I am right, that I have indeed caught a Scarce Black Arches.

And all from a moth that I could easily have ignored. One that could have escaped from the house at any moment before I went in for lunch. And one that could so easily have not entered the house, so remained outside both building and trap, undetected. I draw two lessons from this experience. First, anything can turn up anywhere, even a modest garden in bungalow-rich suburbia: witness Orache and Scarce Black Arches in three days of each other. Second, check anything and everything that looks even halfway interesting. Dismiss stuff at your peril...

An unabashed migrant, with the exception of a possible resident population at Eccles (where Neil Bowman seems to catch them every year). I take a couple of pot shots and whack them out to our WhatsApp group. Who come back positively. The latest recruit to our group, Marcus Nash, draws my attention to a Scarce Black Arches caught by Matthew Deans at Bawdsey yesterday; mine looks awfully similar. I contact Matthew and Neil, and they both confirm the identification. A poorly marked individual, but a Scarce Black Arches all the same. Neil mentions that two have been caught in Kent today. At which point the inevitable twitch ensues. This is the 13th modern record for Norfolk, the first inland, and effectively the first twitchable one.

It's been quite a wildlife week since coming back from Scotland (about which I have still not blogged). The Fin Whale. Then the Orache Moth. And the Yellow-spotted Emerald (identification if not first-hand enjoyment). And to today. As usual, I open the moth trap about 0630. Compared to the past few days, there's a slightly larger number of moths (getting on for 300) of slightly fewer species. Among them is my first White-line Dart - not a species that seems to venture inland very often, so unsurprising that it has not graced my trap before. For a noctuid, it is pretty smart. I am happy enough with that - any day with a tick is a good day - and set about a busy day of work: a 2,000-word feature to write for The Birdwatcher's Yearbook, two presentations to prepare for my Birdfair talks, proofs to correct for my monthly Countryman article, and some queries to address on a travel guide I am editing.