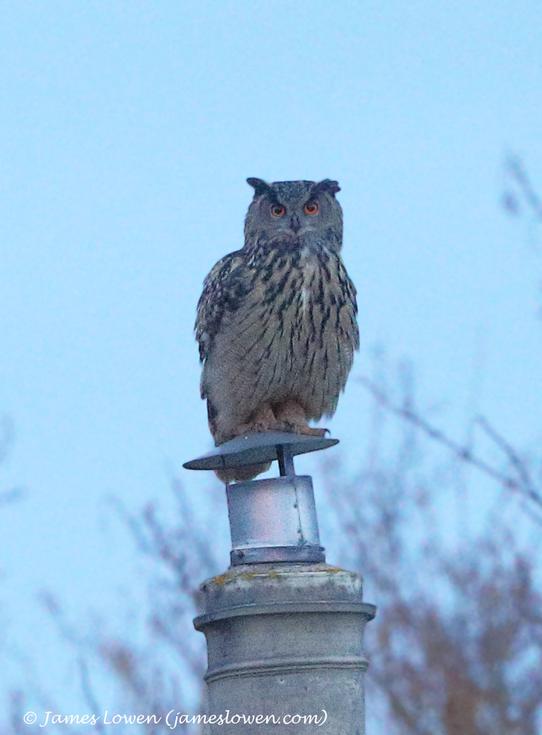 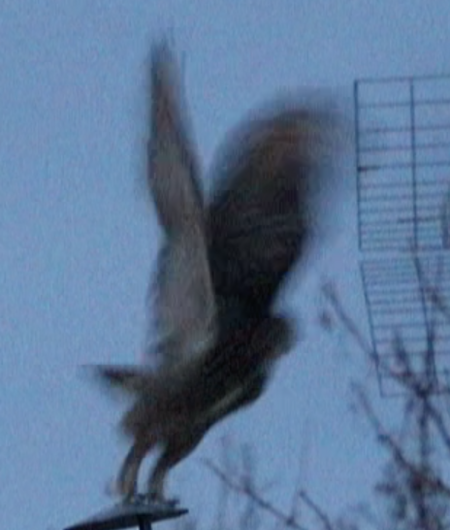 As for the bling uncertainty, I have four photos - in addition to the above - that show the left leg, which is where the ring is meant to be. The two at take-off are video grabs. The bird is preening in the other two. I personally consider the mention of ring to be fake news. But would be delighted to be shown otherwise. fwiw, I still don't believe the bird is wild. But I do, at least, now believe it is Eurasian.

There's been an uncommon amount of interest in the Winterton Eagle Owl the past week or two. There's no way this is going to be a wild bird, even if the whole Angus thing is presumably a red herring. There's been plenty of chat about whether certain features (e.g. black rim to facial disc) indicate Indian Eagle Owl rather than Eurasian. Then came the message that it was sporting bling on its left leg. None of which suggested I should do anything other than stay at home and flatly refuse to go and see it. This afternoon, however, I was free - a London trip to see The Wedding Present having been aborted. I was thumb twiddling, and thought why the heck not. After all, I (among plenty of others) couldn't see any ring on photos present on the inter web. I also wondered whether the bird was calling at all - which might help confirm the species one way or the other. And an Eagle Owl is a beast, whatever its identity and provenance. When I arrived, Patrick Goffin wandered up and excitedly announced that the bird was calling. Over five minutes from 3pm, I heard it three times (and Patrick heard it more). Together with Rob Holmes, Barry Jarvis, Stuart White and others, we heard it call several more times from 340-345pm. I've uploaded a cut to Soundcloud - click here. It sounds bang on for Eurasian and - to my ears - quite unlike the cuts of Indian on xeon-canto. A few minutes later, Barry Jarvis located it in a tree just above roof height next to Hales Lodge. We watched it for most of the next 25 mins until it headed southwest over fields.