Clearly, the big shame is that the bird was silent. Most of the pro-YBW features outlined seem to be within range for Hume’s – but the nature and breadth of the secondary 'shadow' may well render thought of Hume’s stone-dead (as argued persuasively by one reviewer). If our bird is a YBW, then:

In the words of one reviewer: “two weeks later and I don’t think many would question an ID of Hume’s”. So what about the early date?

So, where does this leave us? Well, that's rather the point of this blogpost: to solicit further informed views. If you have an opinion on this bird, I'd love to hear it please, whether via Twitter (@JLowenWildlife) or email. This is the second tricky wing-barred Phylloscopus of my autumn (actually the third, if you include a Greenish Warbler that naughtily showed a reduced greater-covert wing bar on the right wing) - and I'm in the market for learning. Given the difference in views, we probably won't put a name to this bird, and I can't currently see that it will be going anywhere (i.e. being submitted as Species X to committee Y) - but that doesn't stop the bird and experience being educational. Thanks again to all who have helped. 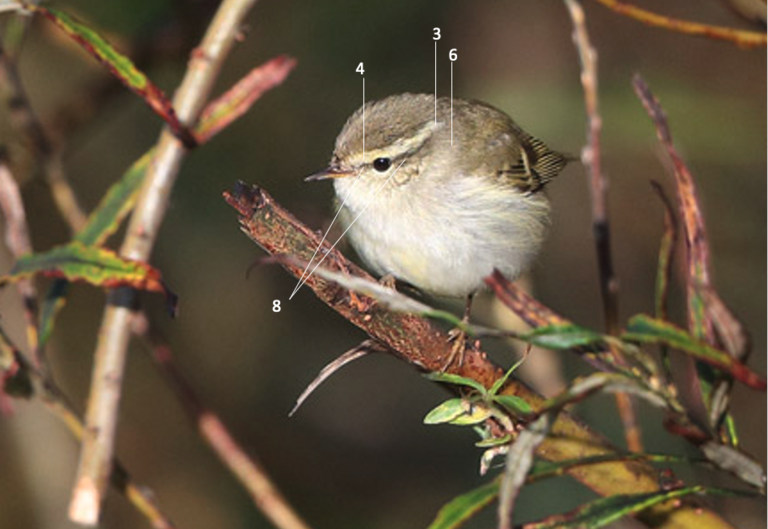 The photo at the bottom of p579 in Shirihai and Svensson Birds of the Western Palearctic, Volume 1, referred to in 16 above. 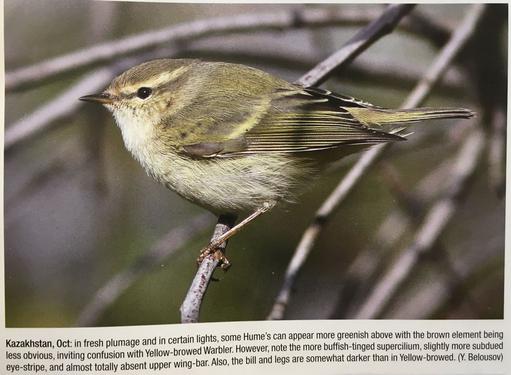 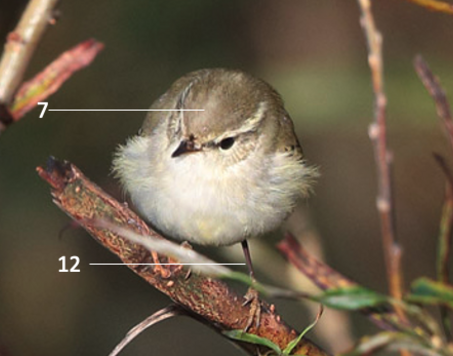 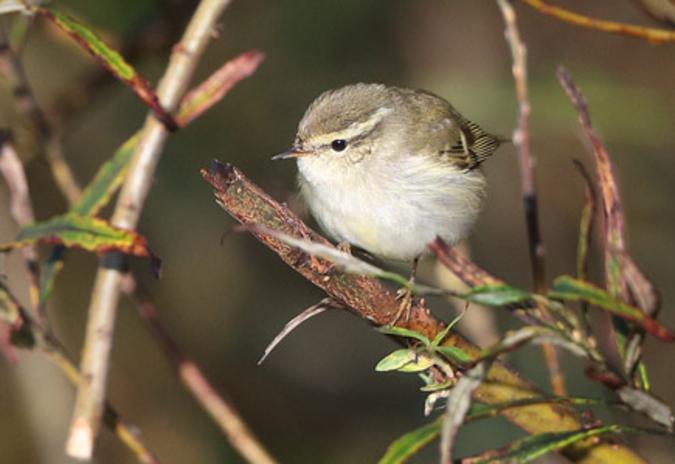 Pro Hume’s:
1. broad (if truncated) buff-white wingbar on greater coverts, which is rather subdued compared to YBW;
2. very indistinct distinct median-covert wingbar which appears buff, lacking any yellow tones;
3. supercilium extends into sharp point at rear of head (this was challenged as a pro-Hume's feature by one reviewer);
4. supercilium appears to lack (YBW’s) significant yellow tones – and perhaps appears to be slightly buff-toned before the eye – though not as cream as ideal (indeed, in the eyes of one reviewer, it looks uniform and yellowish throughout);
5. mantle/scaps are concolorous pale greyish/ green, not moss-green of YBW: tone is drab, not crisp;
6. a greyer cast to the base of the nape, creating a ‘shawl’-like effect quite unlike YBW;
7. crown appears brownish-grey, definite grey cast with a neat little central crown stripe;
8. faint loral stripe (almost lacking, with almost no contrast) and fainter eyestripe behind eye which appears pretty much concolorous with nape sides, thereby creating a ‘plain-faced’ impression that is very different from the ‘Goth eyeliner’ of YBW’s complete, contrasting and blackish eyestripe;
9. ear coverts paler and spotting indistinct;
10. centre of greater coverts grey (not black);
11. fringes across the wing panel are not overly bright;
12. legs grey-brown, lacking the blacker legs and yellow feet of YBW – although soles of feet appear to be yellowish;
13. bill pattern – black with pink on the lower mandible restricted to the basal half – is within range for Hume’s (per photos in Shirihai and Svensson);

Pro YBW:
14. a broad and fairly obvious dark shadow on the secondary bases, below the greater coverts. However, this was also shown by two calling Hume’s found by one reviewer, is evident in a photo of a bird in Oman (Feb) shown on page 578 of Shirihai and Svensson, is apparent in photos of three UK Hume's here, here, here and here, so ostensibly appears to be within range for Hume’s. A compelling counter-argument presented by another reviewer articulated that the black shadow is too broad and sharp-edged to match Hume's (and he is absolutely right that the birds to which I link show a narrower, diffuse-edged shadow), - and it is the 'killer' feature for this being YBW. That said, this breeding adult Hume's (ssp. mandelli) shows a broad, straight-edged shadow...;
15. supercilium is consistently bold and broad between bill and eye – and there is not much contrast in hue between fore- and rear supercilium, nor any bulge on the rear supercilium;
16. centre of the visible tertial appears a bit black with strong contrasting whiter edge – although black tertials are also shown by a “fresh-plumaged” bird (Kazakhstan, Oct) in Shirihai and Svensson (p579, bottom photo: see below) and three UK birds here, here, here and here, so appears to be within range for Hume’s, if not typical;
17. not especially short-billed;

18. underparts look a bit clean for Hume’s (especially towards rear?) but flanks at least are slightly dull and sullied.

A report of a probable Hume’s Warbler at Sammy’s Point, Easington on 7 Oct prompted me to check my photos and the literature, particularly Shirihai and Svensson’s Handbook of Western Palearctic Birds, volume 1. The latter revealed that the bare-part coloration on our bird was entirely within range of Hume’s, and that we could not discount the species on these characters alone. This prompted me to critically examine the photos and share them with Dave/Phil to check I wasn’t going mad, and then to seek advice from a number of people. Dave Andrews, Mike Buckland, Mark Golley, Jonnie Fisk, Paul French, Josh Jones, Tim Jones, James McCallum, Richard Moores, Jack Morris and Stuart White kindly invested a considerable amount of time in reviewing the photos. I am indebted to everyone for their help. Based on these photos, views are split: a majority thinks it Hume’s but others (including a key reviewer) are sure it is YBW. At the expense of some quality, here are tighter crops of the same four photos as the slideshow above. The images (and colour tones) are true to how the bird appeared in the field, and have not been processed at all other than cropping. 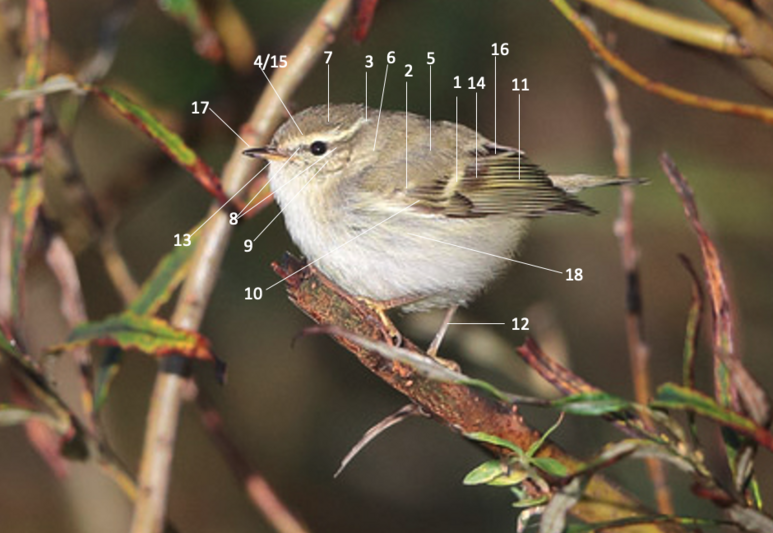 Early on the sharply sunny morning of 5 Oct, Dave Farrow, Phil Saunders and I found an interesting wing-barred Phylloscopus warbler in Sykes’s Field, Kilnsea, Yorkshire. The bird showed well on-and-off for about ten minutes as it fed in small willows by the southernmost caravan. The bird’s strikingly greyish upperparts, indistinct median-covert wingbar and muted face pattern immediately suggested Hume’s Warbler. However, three factors – the early date, pale base to the lower mandible and grey-brown rather than black legs – unsettled us sufficiently that we talked ourselves into concluding that it was an odd Yellow-browed instead. Sadly, the bird neither called nor responded to tape of the two candidate species before disappearing towards Church Field. We failed to relocate it (though did see a classic green-and-white YBW in the same light conditions), and it was not seen again afaik. 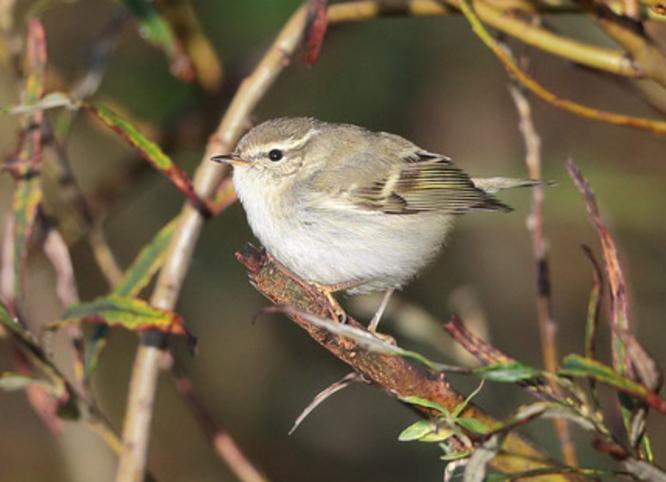 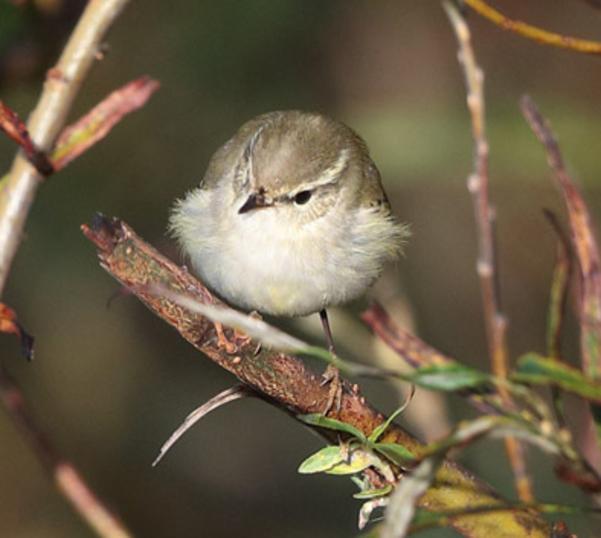 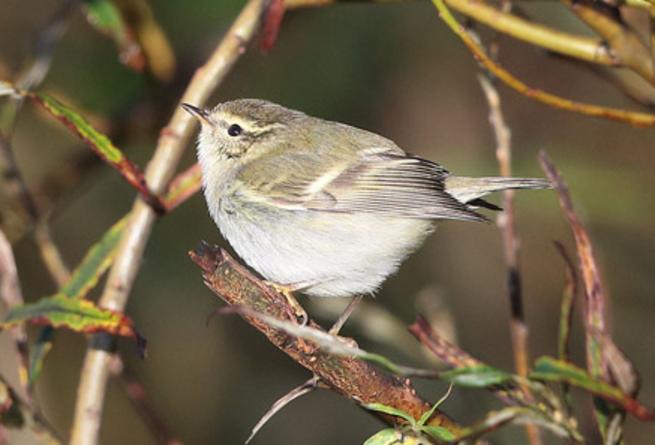 The following assessment draws largely on Mike B’s detailed analysis, complemented particularly by thoughts from Mark G/James Mc. I think it includes all the points that everyone made, whether in favour of YBW or Hume's. Numbers in the photos refer to those in the analysis that follows.