Wife housebound and on long-term sick, masses of work, parenting over the Christmas holidays... Moan moan... And it meant that I wasn't getting out birding either. So I haven't been able to go and admire the Lesser White-fronted Goose, Siberian Stonechat, Grey-bellied Brant, Desert Wheatear or Black-throated Thrush that everyone else seems to have enjoyed over the Yule period. Today a brief window in work encouraged me to agree to Max Hellicar's plea to take him goosing. After all, Mark Golley had relocated the Grey-bellied Brant back at Fring yesterday. And there was the opportunity for a major world tick (Guy Kirwan actually birding rather than stuck behind a computer) and to see Rob Williams. We couldn't find more than a hundred Pinks around Fring, which made for a poor start. We couldn't see anything in the 500 Sedgeford Pinks, or get close to the much bigger flock that Rob and Guy had spotted. But the Eastern Yellow Wagtail showed very nicely - and in better light than when I saw it in December. 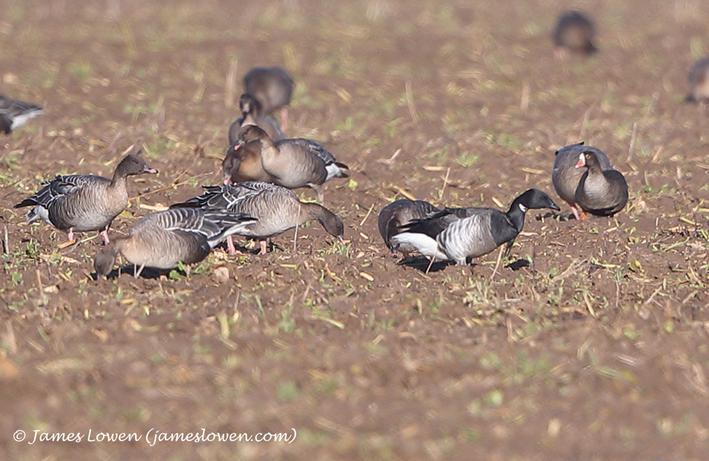 We were on our way to the mega flock of Pinks near Docking when Nick Parsonsfound both the Lesser White-fronted Goose and Grey-bellied Brant in far west Norfolk, close to the Lincs border. Max, Rob, Guy and I were the first cars on site, and we soon located both birds. Very nice. I suspect there's never been a pic of the two species together either - anywhere!

On the way back into Norwich, I suggested to Max - a confirmed larophile - that we might pause at Longwater Retail Park and check out the gulls on the roof of the refuse centre. I had checked these a dozen times in recent winters, without finding anything. But I reckoned there out to be a Caspian Gull there some time. And with at least one at Earlham Marsh and Ketteringham - both on this side of Norwich - it seemed worth checking. As it was. Max swiftly spotted two Casps. We got a bit muddled with the age - in part because I was looking at the obvious first-winter bird when he was looking at a second bird. But it transpires that the first-winter bird is the Earlham Marsh one (Max saw it there later in the afternoon, having found it there on 14 Dec) and the other bird is a new second-winter. And I was still back in time for the school run. A cracking day!