Oh how we East Coast birders live for a schniff of easterly winds! The first hint of these for quite some time came at the weekend, with a band of rain moving along the coast on Saturday, accompanied by northerly (and vaguely north-easterly) winds. I thus birded Saturday morning, all day Sunday and all day Monday. The pickings were the best of the autumn so far, but still slimmer than we would have wished. There was stuff to find, but there was also ample frustration (the most acute of which won't be making the public domain, even if a few mates know what I am talking about). Partners in crime, at various junctures, included Guy Dutson, Phil and Ashley Saunders (not related, in case you were wondering), Will Soar, Dave Farrow, Stuart White, and Mike Buckland. Thanks to them all. 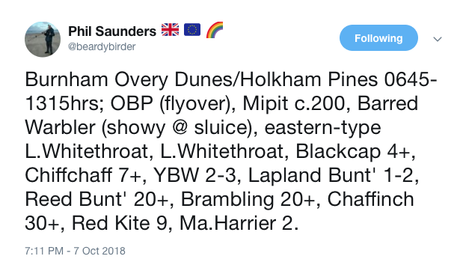 Having refuelled on caffeine and brownie, Phil and I tried Stiffkey. At Campsite Woods, at least 2 Yellow-browed Warblers were present, but we also pulled out a vocal Red-breasted Flycatcher and a Pied Flycatcher. The RB Fly resulted in rather a large (and unsuccessful) twitch...

More amenable to submission was the above Eastern Lesser Whitethroat, found by Will east of Gun Hill. It was a splendidly sandy individual (I've only once seen a bird this pale, on Fair Isle in 2014: see here and here), and the detail of white on the tail feathers would seem to eliminate nominate currucua, and suggest it is one of the eastern races, most likely blythi. It didn't give the Blue Tit rattle call, however - just the normal 'tac'. Holkham Pines held 2-3 Yellow-browed Warblers in the south-west bit we worked. Another scarce warbler was a Barred Warbler found along the seawall by Ashley. This was thought different to one seen in the boardwalk bushes. Ashley's bird was a little distant for photos, but showed very nicely in a hawthorn bush. Most pleasing.

Other migrants at Burnham Overy Dunes included 1-2 Lapland Buntings among totals as described by Phil below. 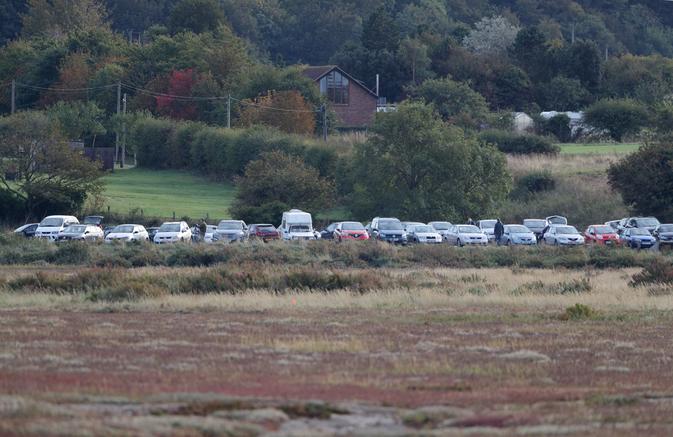 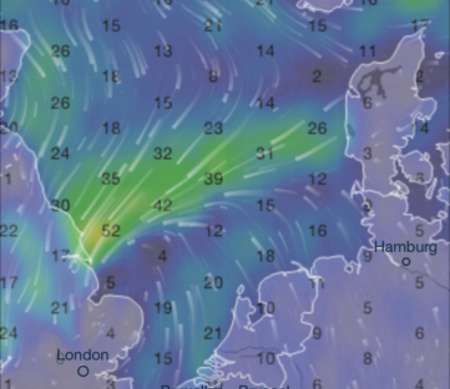 On Saturday morning the strings winds rendered Burnham Overy Dunes blown out. In Holkham Pines, however, the shelter enabled Guy and I to find our autumn's first (and only Norfolk's second?) Yellow-browed Warbler. The first one of the year is always a pleasing site, even if their value changes quickly during October. With a few score Redwings and 31 Snipe all heading west, that was about as good as Saturday got. But we expected that. The birds would get brought down by Saturday's rain, and we would find them on Sunday. And that's how it transpired, with Phil and I having an Olive-backed Pipit fly past us at Gun Hill at 08h00 on the Sunday. It called three times - to my ears a markedly buzzier, raspier, shorter and almost more aggressive call than Tree Pipit - and was seen in flight to be shorter tailed than a nearby Meadow Pipit, much darker above, and clean white  below with bold striping. And that was basically that. We failed to nail it thereafter. No sound recording or photo - which makes it unsubmittable (to the county records committee), sadly. 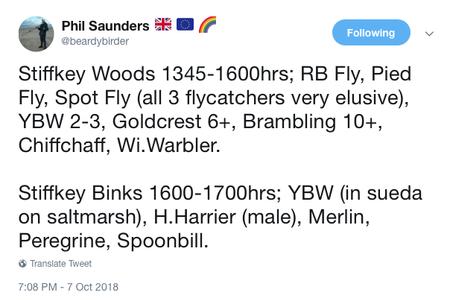 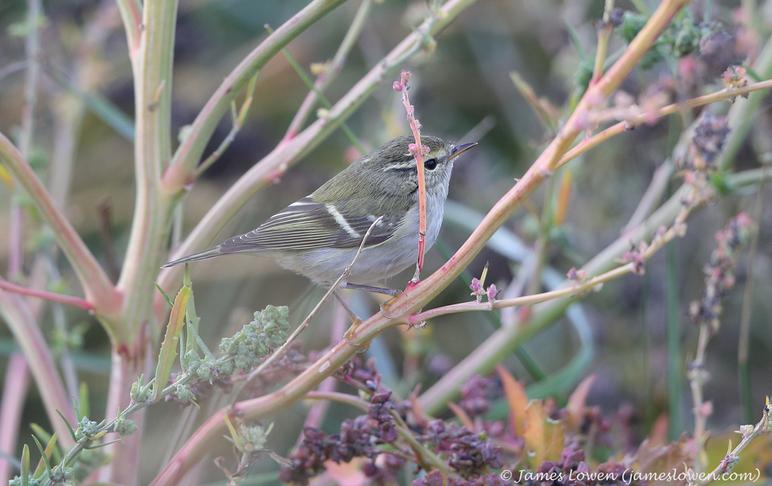 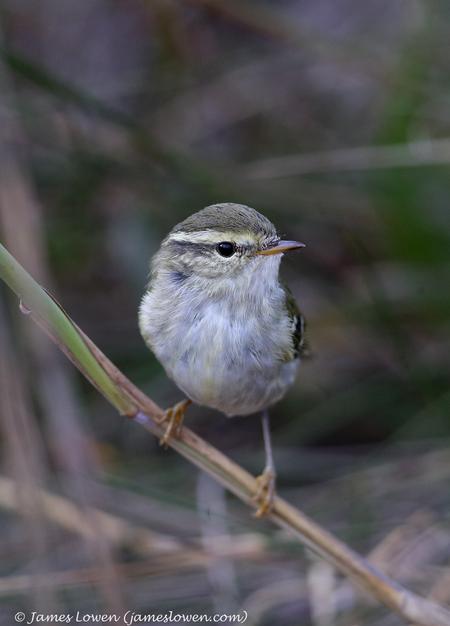 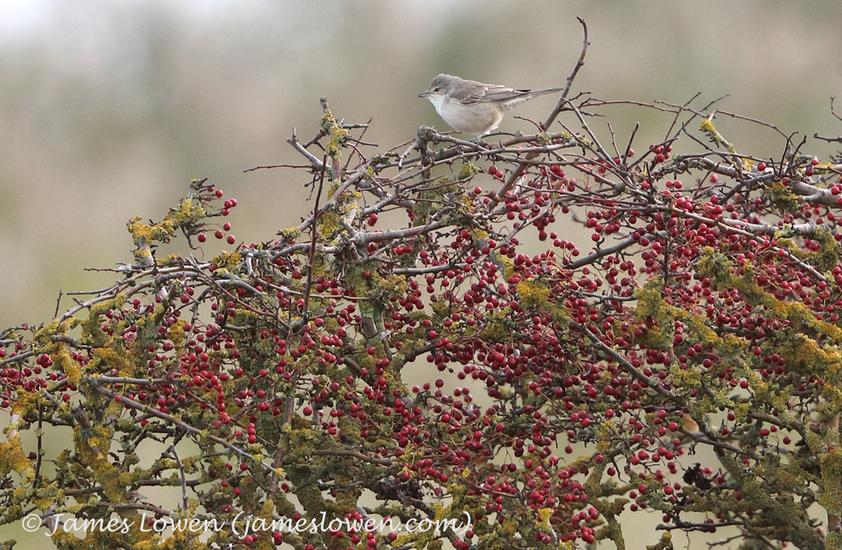 Such crowds are neither my scene nor Phil's so we trotted 1km north across the saltmarsh to a slightly elevated area with weedy fringes known as Stiffkey Binks. Here were had the bird of the day. A fresh-in, so-tired-it-could-barely-perch-straight Yellow-browed Warbler. After 30 mins, the bird recovered and was zipping around. Impressive stuff. A miracle of migration.

The following day, I started by vismigging at home - adding Brambling and Fieldfare to my entry in the Norwich Garden Bird Year-List Challenge (a concept that will feature in Bird Watching magazine later this year). I returned to Stiffkey Campsite Wood, where Yellow-browed Warblers had increased to at least five, possibly six. But otherwise numbers and variety were down. Still, it was better than Wells Woods, where I couldn't even muster a single YBW - just Chiffchaffs & Blackcaps. It was so quiet then i ended up bunking off birding and twitching the Ortolan Bunting at Waxham (a Norfolk tick and a good county bird at that) before making it back to Norwich for the school run. Now let's hope for some proper full-on easterlies... it's Spurn for four days this coming weekend! 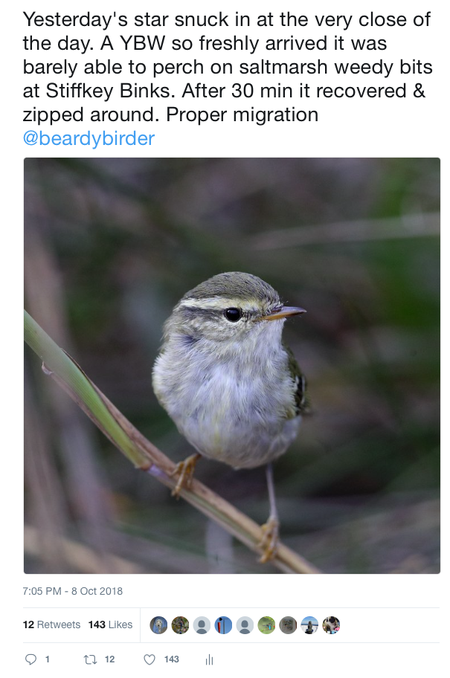