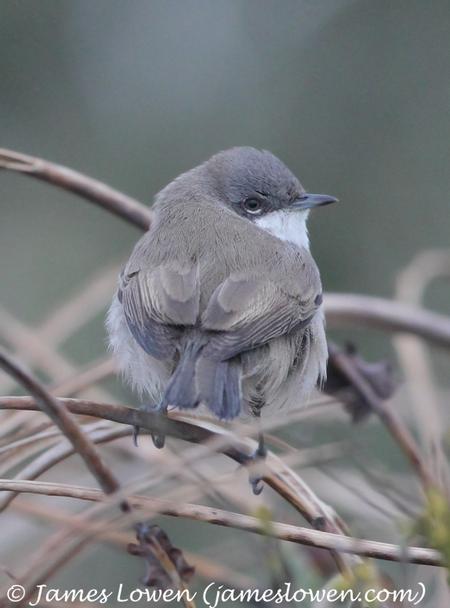 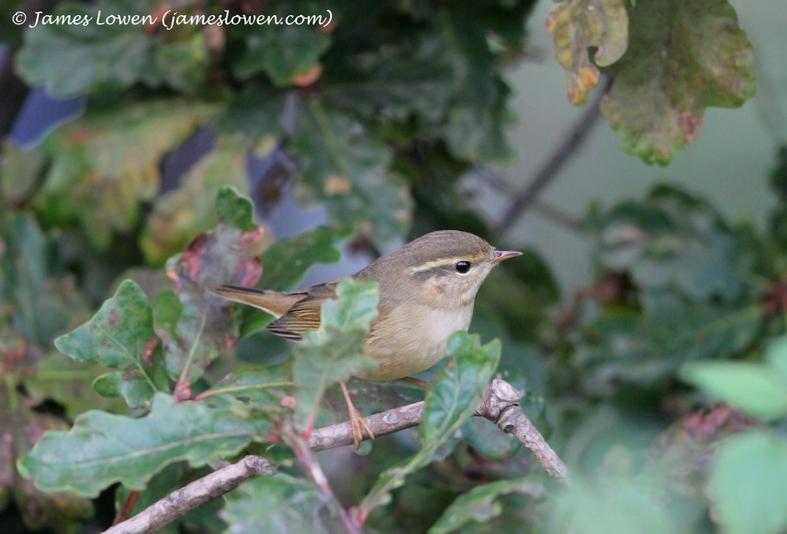 So, dawn till dusk in the field, stopping walking only for 20 minutes the entire day, to produce... a self-found Dusky, two Radde's, six Yellow-broweds, an interesting Lesserthroat and eight Lap Bunts. A fine choice not to work! 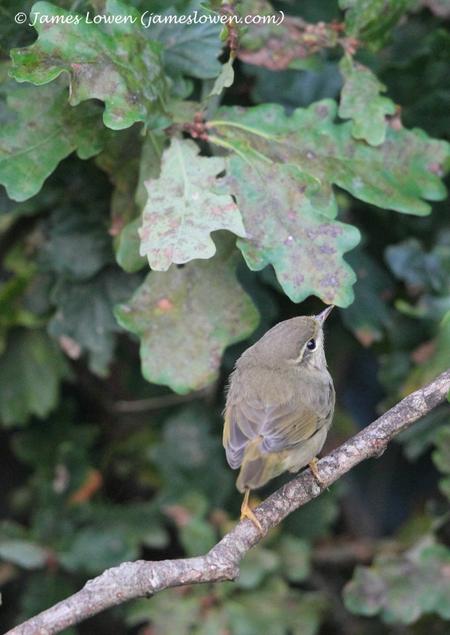 The morning started gloomily: ISO3200 the default camera setting. There was mist and cloud following overnight rain. The wind had already switched from easterly to southerly, but it still felt rare. Nevertheless, for the first hour we found next to no birds: no sign of migrants having arrived or passing overhead. 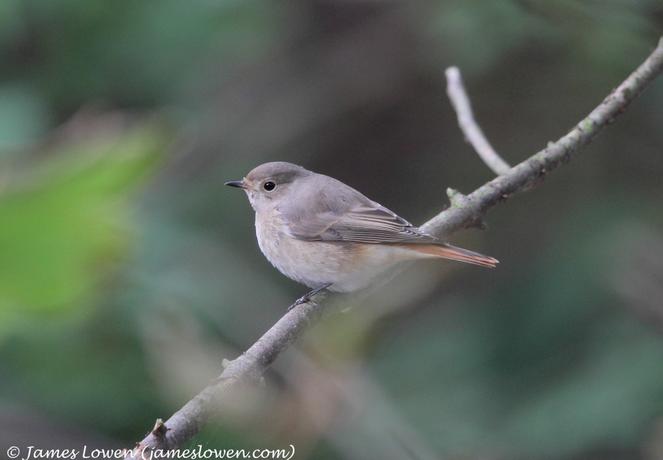 For three hours from 8am, everything changed. We had a golden patch. The tide turned when Stuart found this Lesser Whitethroat. It was big, bulky and dark. Although we didn't nail the tail pattern, we felt that this was probably a Siberian-type Lesser Whitethroat and put it out as such. I sent a couple of back-of-camera shots to fellow Norwich birders. Rob Martin warned us that claiming anything other than nominate curricula was doomed to failure. Having looked at photographs, Martin Garner's Autumn book in his Challenge series, and a useful blogpost from Dave Appleton (about a bird at the self-same site in September 2014), I tend to agree that this is a plain-and-simple Lesser Whitethroat. The brown extends too far up the nape for blythi, and there is none of that taxon's warm tertials. Those tertials look pretty tired, which suggests the bird is an adult; in turn, that might explain apparently extensive white in the outer tail feather (albeit photographed from below). Stu heard a snatch of call, and nothing alerted him to being different from nominate. A bird from which we learn.

Although it still felt very rare (we were targeting a Posh Dunnock, clearly), we didn't pull anything else as good out of the bag in the couple of hours before Stuart had to leave. We came close though, and further Lapland Buntings, a few Ring Ouzels and plenty more migrants certainly kept the energy high. I then headed into Holkham Pines, where I chanced upon a Radde's Warbler, presumably the bird that had been there earlier in the week, albeit in a slightly different location. It called for about ten seconds, then showed briefly. Then disappeared. As Radde's tend to do. Wandering eastwards, and check the north side of the pines, I pulled out six Yellow-browed Warblers and a nice, vocal Common Redstart, but nothing else. Even the Redstart refused to do more than hint at the pale secondary fringes that might just indicate a bird of the subspecies samamiscus.

Bumping into Andy Symes prompted a refreshment stop at the Hushwing cafe on Lady Anne's Drive, surrounded by good-looking posh people and their good-looking posh dogs. We then headed eastwards into Wells, largely walking off-path and finding... nothing. Not even a Yellow-browed (that I can remember). Not even the Olive-backed Pipit that had been around for a few days. Just Robins and Goldcrests and Blackcaps and the odd Chiffchaff. Oh, and nine Red Kites soaring above the wood. Frustrating! So we sacked it off, and spent the last few minutes of decent light at Warham Greens, where we managed decent (if fairly brief) views of the Radde's Warbler than Rob Martin found yesterday, on his birthday.

Whatever the bird was, finding it boosted our mojo. And on the way back east along Gun Hill, it was apparent that birds were arriving. Starlings were scudding overhead. Thrushes were everywhere. Reed Buntings too. A few Robins skulked around the suaeda. Stuart saw a Redstart. The sea buckthorn held Goldcrests. Five Lapland Buntings called overhead. And then we heard a sharp 'tak' call coming from a low bush. Rather than a Wren or Blackcap, up jumped a Phylloscopus warbler. "Dusky Warbler!" we each shouted, Stuart a split-second before me. GET IN! 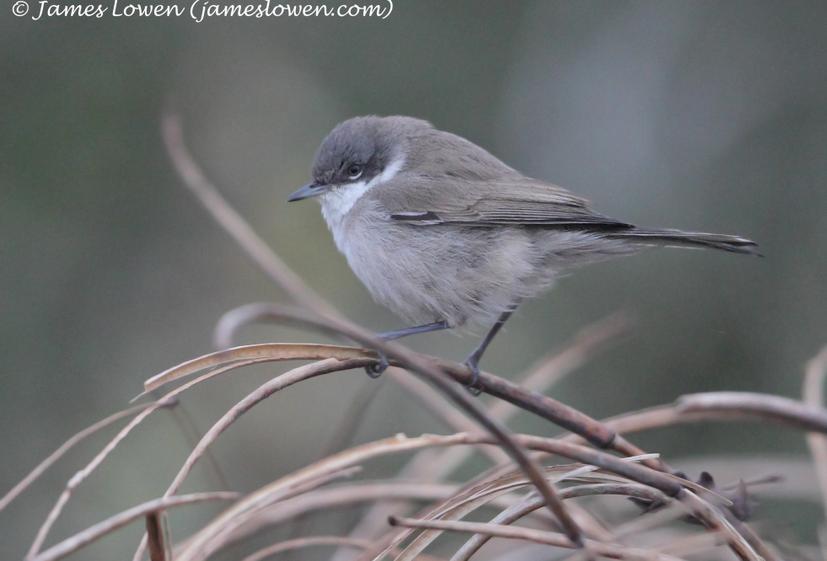 This scarce Siberian migrant was a find-tick for Stuart; I had been lucky enough to encounter one in about 1998, just along the coast in Wells. We were both ecstatic. Even more so because the bird showed so well. Calling repeatedly, feeding frantically, frequently in the open, and always on the move, it behaved more like a souped-up Chiffchaff that the sulky, skulking Duskys to which we are used. Stuart and I agreed that we had never seen one so well. Our guess was that it was freshly arrived. Within an hour, for birders who arrived following news, the bird was showing poorly and then disappeared southwards before midday, not to be seen again.

Today I spent 11 hours walking the North Norfolk coast, covering the area between Burnham Overy and Wells. For the successful morning, my partner in crime was Stuart White; in the afternoon, I bumped into Andy Symes (one of our Shetland group) and we mooched around rather less optimally. The goal: find rare eastern migrants. Given that I had burned the brownie-point balance to go to Shetland, being out on the coast at all was a treat; a kind exeat from Sharon after the bedlam of this working week. Every day away from an intense workload and family is a balancing act: is there a decent enough prospect of finding something good, or is there a conveniently located rare to clinically twitch? If either criterion flunks, then I stay home. Today, however, the lure of Siberia in Norfolk was too great. 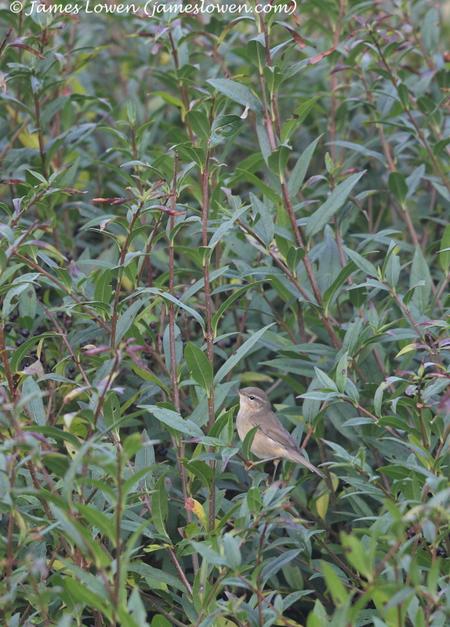