I also returned to the North Norfolk coast, seeking migrant passerines. Conditions on Friday looked good for a fall, with a belt of rain arriving at midday and apparently drenching the coast for the rest of the day - the legacy of a swirling, unmoving depression in the N Sea to the east. As things unfurled, the rain fell only for an hour around lunchtime. That appeared to be enough to deposit four Pied Flycatcher and one Spotted Flycatcher at Burnham Overy Dunes, as I crawled into bushes - as much to shelter from the blow-you-over northerly as to find dumbstruck migrants. Graham Clarke and Nick Watmough appeared for a bit but, having already walked Blakeney Point(less) in the morning, were in no fit state to wait out the forecast return of the rains about 17h00. So I stuck it out alone. And at 17h00, a mini-fall appeared to happen. I first chanced upon a Wryneck in the east dunes, which didn't like the sight of me, so fled east towards Holkham. Ten minutes - and 500m - later, I checked the boardwalk bushes for the third time that day to find a Wryneck perched up, a Whinchat, another Pied Fly and two lemony-snicket Willow Warblers. All were apparently fresh in - and the Wryneck I rather suspected was a second bird. A nice bird with which to be to be jynxed, given that I had already found one Wryneck this month. I found two other Pied Fly (making eight total), Garden Warbler, Whitethroat, Blackcap and another Willow Warbler and then a Wood Sandpiper on the marshes on the way back. All in all a nice reward for persistence. 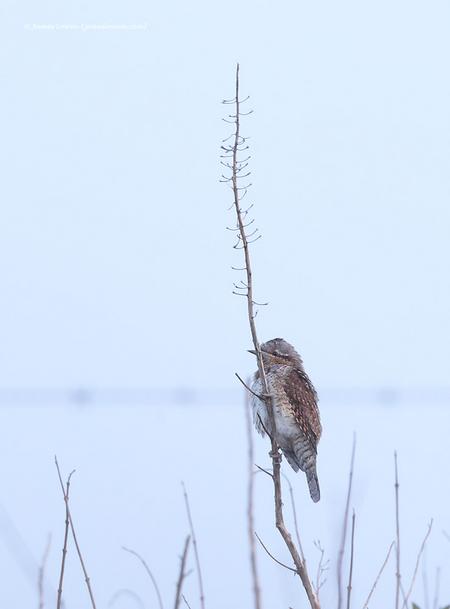 And, interestingly, it did indeed feel like reward. When I found the other Wryneck, my overwhelming sensation was of frustration - that I couldn't find anything better (specifically, the Greenish Warbler that I was yearning to discover, which would have been a long-overdue self-find tick). Yet today, with the same species starring and the same hope (of a wing-barred sprite) dashed, felt like success against the gale-force odds. It also helped that I didn't think the game was quite over yet. With the winds continuing throughout Sat and Sun (when I was unable to hit the coast, for reasons of family and cricket), I had my eye on the calm of Monday to find something. Accordingly, I was delighted that my wife Sharon envisaged a family lunch in a Thornham pub that day. Perhaps I would be allowed a short stroll before lunch then a 2-hour whizz around Wells Woods, where many good things happen two days after a fall. We arrived at Thornham with forty minutes before our lunch booking. Having been berated on the journey for 'ruining' family walks by being distracted by moths, dragonflies or birds, I decided to leave my camera in the car but take my bins as we wandered along a footpath that flanked a wood I had always thought looked good and, on occasion, even checked. So I was buoyed at hearing a Pied Flycatcher calling barely 100m along the path. As I watched it in a holm oak 25m away, a smaller bird caught my eye. A Phylloscopus, and quite a bright green and white one that. Hang on! I slipped out the phone and pressed play on David Bradley's Xeno-canton recording of a calling Greenish Warbler (one that I had used extensively already this month). The Phyllosc shot towards me, appearing in the nearest trees - a holm oak/holly combo. Jeez! It flirted with me for a couple of minutes before finally revealing what I was hoping to see: a bangin' supercilium curling behind the ear coverts and meeting over the eye and a decent greater-covert wing bar (on the left wing at least; it didn't seem very well-defined in the brief view I got of the right wing). Yeah! Greenish! I reached for my camera to take the documentary image... and remembered the Canon's location. FFS! At this point the bird sussed my use of the tape, and flew back to its original holm oak. I watched it on and off for another ten minutes until deciding to risk a run back to the car for the lens. Upon return, there was no sign. One nervy family pub lunch later, I was back - and after c.50 minutes, the bird called for Richard Webb, Steve and myself; a big relief that others had got on it, given my lack of photo. With birders accumulating (and the bird subsequently showing 'on and off'), it was safe to depart - and rejoin the family day. Yep, I was persona non grata. A long-craved self-find tick secured, but jynxed through emotion nevertheless.

Other garden highlights included my first two Metalampra italica here (this being a recent colonist of SE England), my first garden Ypsolopha alpella (a localised oak specialist), a brace of Red Underwing one night (Dark Crimson, which has apparently now colonised Norfolk, hasn’t yet reached me), and a couple of black, white and ginger Common Rustic agg. that are presumably Lesser Common Rustic (an annual August occurrence here). Because I was passing one morning on the way to check the coast for migrant passerines, i.e. it would have been rude not to, I also paid my respects to the two Etiella zinckenella that Murray Smith caught in his Lingwood garden - part of an exceptional influx this month.

It’s been a great period for migrant moths across much of Britain. Just not my garden (or that of my friend Keith Kerr, with whom I have ben exchanging mutually commiseratory messages). So it was delightful to finally get in on the act in the past fortnight, the garden attracting both the dapper Scarce Bordered Straw and the sheeny micro Palpita vitrealis. I’ve had both here before, but that doesn’t dampen their allure. Indeed, Palpita was a moth that eluded me during last year’s moth-madness.