Diamondback Moths have also been a feature of moth-trapping at home, with single fingers most nights in the past week. Silver Y have been pretty prominent too, with up to four per night. The biggest surprise has been high numbers (up to 12 per night) of Green Oak Tortrix. I normally catch 1-3 per year of this species. Other mothers have recorded greater-than-normal numbers as well, and Will Soar had one at Burnham Overy Dunes (where there's not an oak for miles around) the day we were out. Are they coming from overseas perhaps? One night the catch included two new species for me (not just the garden). The gorgeous, supremely camouflaged Alder Moth and an Orange-rayed Pearl Nascia cilialis (with, amazingly, a second trapped a few nights later). Pale Oak Beauty and Marbled Brown were new for the garden and there were other nice moths too: Poplar, Privet, Lime and Elephant Hawkmoths, for example.

I've also done a bit of looking at moths elsewhere. Keith Kerr, being a true gent, invited several interested folk to admire the Netted Pug that he had trapped. A completely stunner that makes a mockery of the name 'pug'. Even if it does have a bit of Burberry about it. A Tawny Shears was a nice foil. Thanks Keith! A gang of us Norwich moth-ers also tried for Large Red-belted Clearwing at a heathland, after Ben Lewis had encountered six within 30 minutes one sunny day. I tried twice, and twice got brief flight views (rather like last year at a different site) by the lure, but failed to catch it. A few minutes after I left, one was caught by Keith and others... Darnation. Nevertheless, the excursions didn't feel like dipping, because of other good stuff observed or caught by day. These included my first two Birch Mocha, Broad-bordered Bee hawk-moth, Norfolk Hawker (which I had no idea was this far north of Norwich), three Roller Ancylis species (Bridge ​A. uncella,Red ​A. mitterbachiana and the rare Festooned ​A. geminana). 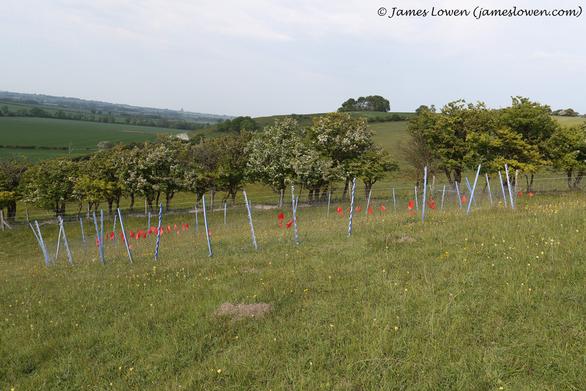 After three hours post-gig sleep back home, I joined Phil Saunders, Yoav Perlman and Will Soar for a day thrashing Burnham Overy Dunes. After heavy overnight rain, we were sure that the easterlies would bring down a fair number of migrants. Hopes were high: for an Icky or Marsh Warbler at least, but preferably an Eastern Subalp or - why not? - a Black Lark. We couldn't have been more wrong. Migrant birds were in single figures, the best being a male Pied Flycatcher. (I'm not sure the Pale-bellied Brent Goose that we found counts.) There were 100 or so Diamondback Moths, however, which signalled a winged arrival of a different kind. But the rares, and even the scarce, eluded us. We resorted to enjoying the second-summer White-winged Black Tern (which kindly greeted my arrival at Burnham Overy Staithe village, thus offering close views, albeit in rubbish light), in admiring a Natterjack Toad that was stumbling about the dunes (rather like us), in blazing away at several Wall butterflies, and in twitching the singing male Greenish Warbler at Titchwell. The latter was by far the dowdiest individual i have ever seen (with barely a wingbar in sight) but it was very vocal, singing regularly and calling even more so. A fabulous bird to hear - listen for yourself - and only my second singing Greenish (the first being above a White-throated Sparrow in Felixstowe 26 years ago). Quality wildlife then, but nevertheless a disappointing day - related in greater detail by Yoav.

Quite a bit of stuff to round up from the past week. For starters, thanks to info kindly provided by Andy Symes, a trio of neat orchids (and two other nice plants, Clustered Bellflower and Adder's-tongue Fern) in Cambridgeshire and Hertfordshire provided enjoyment as I passed through the counties en route to a Wedding Present gig. Frog, Early Marsh and Burnt Orchids all present and correct, although the former were rather insipid (perhaps that's always the case with this early-flowering, neutral-grassland form; I've only seen the later-flowering chalk downland variety) and 97% of the latter were trapped in an enclosure and literally flagged for visitors' attention. "Please do not feed the orchids", as the ever-witty Phil Saunderscommented when I shared my photo with Norwich folk. I'm very much in two minds about the sanity of protecting rare orchids in this way. For sure, it spares them easy attention from herbivores and clumsy feet. But it doesn't half draw attention to them - and warped individuals might make a mockery of the attempt at safeguarding.

With these moths, May is hinting at a close. Easterly-side winds continue, but there's no suggestion of rain to bring any migrants down. Still, surely I can find a Pink Stink (Rosy Pastor, if you are of a sensitive demeanour) in the coming days. That would bring up my self-found 300, so I am rather keen to minimise parenting responsibilities and get to the coast...