Of the original St Ives/Hayle Booby there was no sign on any of the three days spent staring at to sea. Generally we laboured under the odd flurry of excitement when someone thought they had got on to the little sulid. But we saw some nice stuff, of course, because this is Cornwall. Five Grey Phalaropes included a party of four, the first time I have seen a wee flock. Single Sooty Shearwater and Black Tern were supported by 1000s of Manx Shearwaters. Med Gulls flurried around. Both Common Dolphin and Common Bottle-nose Dolphin slipped through the swell. A spot of mothing on the Hayle Estuary produced the very local and rather smart micro Mycena asinalis ('Coast Pearl'; above). Traps set at Penzance YHA (a truly excellent establishment) produced my latest-ever Poplar Hawk-moth, two Mullein Wave, two Flame Carpet, Rush Veneer, Rusty-dot Pearl and a late Black Arches. A Hummingbird Hawk-moth buzzed red valerian. A young Peregrine gave startling views as it hunted Wood Pigeons. Ravens croaked past. We had nice views of the Western Bonelli's Warbler at Trescaran. Godrevy produced several Autumn Ladies-Tresses (with thanks to Sean Cole and Mike Waller). 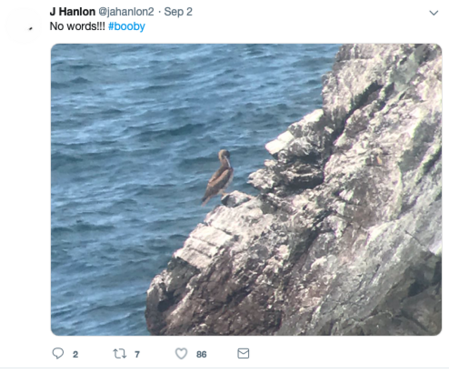 After an hour we were treated to 45 minutes of excellent views as the bird fished in bays below us (at a couple of points flying over an Ocean Sunfish). In flight, the booby was markedly compact, with a short tail and slender body. In size, it wasn't much bigger than a Great Black-backed Gull and lacked any of the ranginess of Gannet. Its flight was metronomic, with rapid shallow wingbeats, again entirely unlike Gannet. Stu accurately equated it to a giant noddy. Most distinctive indeed - even before you got on to plumage. Towards the end of this performance, Andy Lawson kindly loaned me his camera - because I had ostensibly forgotten my battery - and I rattled off a couple of shots to record an unexpectedly successful culmination to an epic, multi-day attempt. Get in! 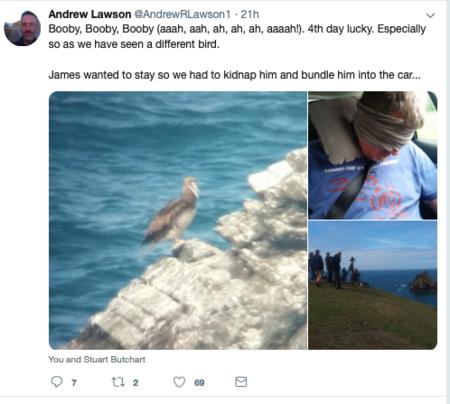 But mainly we peered out along rocky and sandy shorelines, wondering how distinctive the Brown Booby would be if and when we finally clasped eyes on it. We also dreamt of - and then consumed - vast numbers of pasties, as (cheekily...) recorded for posterity by Patrick Barkham in a piece in The Guardian. And we were increasingly traumatised by excellent photos when the bird truly gave itself up during the scant hours I spent back at home in Norfolk. 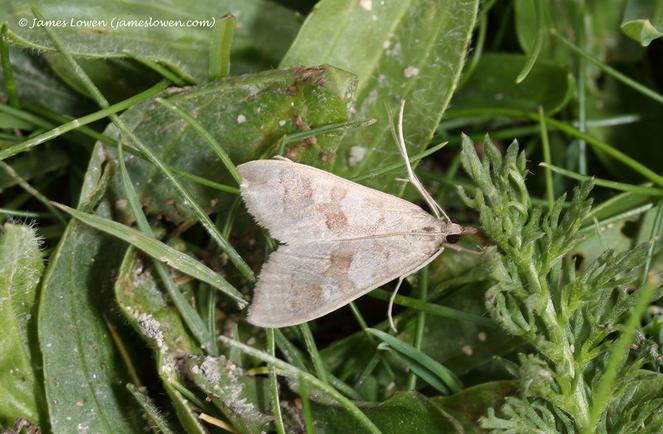 So I've just spent three days in Cornwall across two trips, trying and failing to see the UK's first Brown Booby (or possibly its second, if the Kent record passes muster, which it ought to). I thought I was crazy spending less than 21 hours at home between the two trips. Crew members on the first trip (Daves Holman and Bradnum) spent as little time at home before returning, separately. But we were lightweights. Of my second carload, Stu Butchartwas to spend four days in Cornwall, Andy Lawson likewise (and he barely mustered nine hours at home before returning) and James Hanlon flew down from family holiday in Scotland, leaving wife to drive a long way home with two young children. We're on a race to get divorced, I suspect...

By 10am on the third day, I had had enough and collapsed in the car, snoring away. Only to be awoken by a sharp rapping on the window from Dave Holman 45 minutes later. "The booby's at Kynance Cove on the Lizard!" Once the team had assembled from slumbering, cuppa-drinking and urinating, wacky races ensued as we hurtled towards Kynance Cove. Here we were greeted by a small crowd - astonished that they were looking at not the St Ives bird, but a wholly new (and much younger) individual. We may have dipped the UK's first (or second; remember Kent) Brown Booby, but we had scored its second (or third). Astonishing stuff - and all just one hour before we due to depart.

(To the tune of 'Twelve days of Christmas'.)

And a puncture on the way home."

Flanked by Cornish Heath and sitting carefully to avoid squashing Autumn Squill, while wishing we could devote proper attention to a family of Chough, we initially watched the booby from a fair distance sat on the lower rock of Asparagus Island, preening and shitting.