I met Sean, Nigel and Julian Russell on site; James Hunter and Phil Saunders (coincidentally up from Dorset visiting his Dartford-based parents) soon joined us. (Wingman Will couldn't make it, sadly.) The night was mild enough for Sean to be in (long) shorts and the air was almost entirely still  Black-spotted Chestnut hadn't been recorded from the site, but the woodland (including birch, maple and oak, on clay) was decent and it seemed a fair shout to give it a try: a riff throughout this year has been to try and push boundaries of knowledge wherever possible, and trapping a previously unsurveyed site seemed apt. But we all knew that it was a long shot. 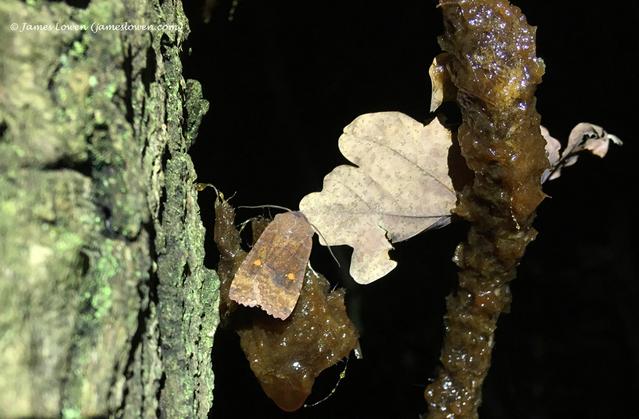 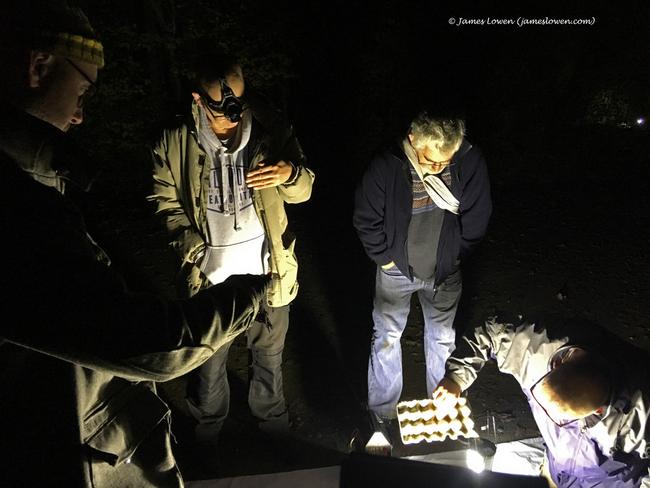 James left us around half-seven, promising to call us if there happened to be a Black-spotted Chestnut waiting in his garden trap at nearby Dartford. This seemed a promising 'Plan H', but James didn't harbour particular hope. Although he had caught around 40 B-SC across the gardens of both Dartford houses he has lived in since 2011, he would not expect any more than five total throughout the autumn period. Given that James traps pretty much every night, this put the odds of success at no more than 1 in 10. Yet just as we set out on our 8pm trap round, James phoned... to say that he did indeed have a Black-spotted Chestnut! Cue expletive-injected smiles and joviality! The air was cooling so we decided to cut our losses, do a final trap round, then pack up. Even though we were unsuccessful, we had put in the effort to catch our own Black-spotted Chestnut - and now we could justify seeing James's. Accordingly, the final target of my 2019 moth year ended in precisely the place and with precisely the person planned: James Hunter, I salute you and thank you!

A few years ago, a Kent naturalist friend called James Hunter changed my life. We had met up to travel to the Chilterns to view a rare orchid. He pulled a plastic pot out of his bag, in which sat a Poplar Hawk-moth. It was the first hawk-moth I had ever seen - and pretty much the first moth I had ever really looked at. Hunter's hawkmoth got me hooked. This year, as it is quite possible that you may have noticed if you dip into this blog on occasion, I have devoted much time and effort to seeing Britain's rare and remarkable moths. At the start of the year, I told James that I planned to finish the year's travels in his garden, seeing a moth called Black-spotted Chestnut, which James played a lead role in adding to the British list in 2011. I had written this finale into the book plan - so it had to be. Twice this year - once in January, once earlier this month - James called me to say that he had caught one. Twice I decided, with slightly heavy heart, against visiting him to see it. I wanted to catch my own, instead. Thanks to Sean Clancy and Nige Jarman, last night I got my opportunity at a country park in west Kent.

Although numbers were nothing like as strident as in Suffolk on Friday, diversity was good. In total, we recorded 20 species - a fair tally for this time of year. The commonest moth was the ever-lovely mini-Musk Ox that is December Moth. A couple of Satellites included one feeding on wine (well, beer) ropes that I had put out, having heard from Neil Sherman that Black-spotted Chestnut readily frequented moth Wetherspoons. Several Acleris notana were smart. New macros for me (and Nige, more surprisingly) were Autumnal Moth and Northern Winter Moth. I have never come anywhere near the former species (and had only an unconfirmed photographic record of the latter), so it was a delight when Sean (author of a wonderful moth field guide, if you weren't aware) readily identified both species.