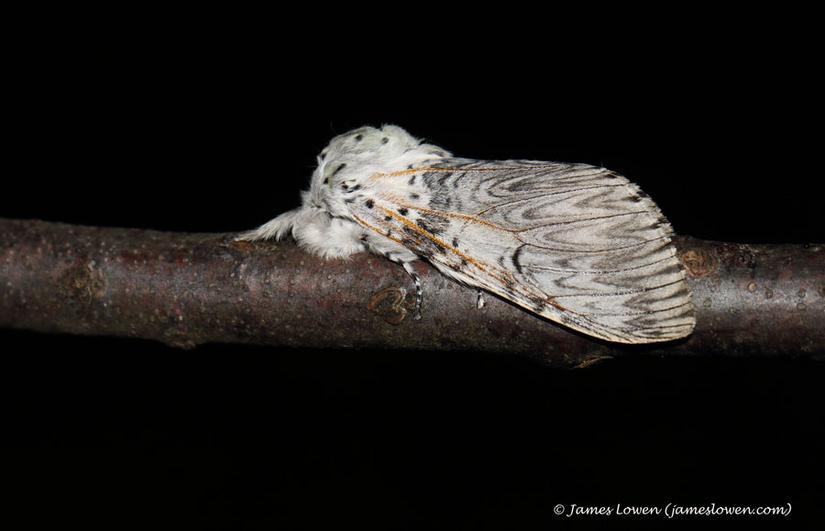 No photos sadly - the camerawomen wouldn't autofocus so Jack Morris and  spent time gawping instead, including through bins. But here are a couple of pics of other interesting, habitat-restricted moths found whole torching around the dunes: White Colon (several), Puss Moth and Shore Wainscot (just the one).

I did get my own Striped Hawk-moth though, albeit in a very different way.

Birdwise it has been quiet, though White-tailed Lapwing, Caspian Tern and Black-winged Stilts (including two I found myself, although later discovered that someone had got there the evening before - something that also happened earlier in the month with Savi's Warbler!) have all made their way into the notebook, and so could have quite a raft of nice species, had I the time available. Talking of which, I had better get back to work...

Scarce Vapourer is, frankly, a mythical moth. I know only the odd moth-er who has seen it, and many more who have asked me whether I know where in the Norfolk Broads (one of essentially two UK locations) this nationally Endangered species occurs. Which I don't - other than a broad guess and knowledge of the odd record from decades past. It is, in truth, a moth I thought I would be unlikely to ever see. Well, thanks to a tweet from a birder and some sharp eyes from friend Sarah, I have now seen one. With a slight catch: it was the spectacular PunkFunk larva that gobsmacked us, rather than the adult. What. A. Creature. And what an absolute travesty that the path side vegetation through which it was munching was razed to the ground just a few days later.

Mothing at home has been better than recent Mays, with greater numbers and diversity. Sadly the hoped-for Striped Hawk-moth has not materialised, with Silver Y and Diamondback the only migrants. Nice stuff has included the first Elephant and Poplar Hawk-moths of the year, the season's first clearwings (Yellow-legged and Red-tipped) a female Muslin Moth (always unusual to see in a trap), Figure of 80 (rare here), Marbled Brown (scarce here) and not one but three Pauper/Fletcher's Pugs, suggesting that there may be a colony of this scarce-but-increasing lime specialist nearer to our garden than Earlham Cemetery, a hotspot discovered two years ago.

A trip to see the reintroduced Chequered Skippers in Northants was sadly unsuccessful. It is worth noting that visitors are asked to keep to the hard-surface paths that the butterflies visit only rarely, and not to enter the grassy rides (where they are more readily found). It is also worth noting that the Butterfly Conservation guided walks follow the same approach, so do not grant privileged access. Should you wish to enter the best area, I was told that the best bet is to volunteer for surveys. Which, when you think about it, seems only fair given the effort BC and others put in to this initially Back From the Brink-funded conservation project. Anyhows... we saw a few other skippers (Dingy and Grizzled) and some nice day-flying moths, including only my second Grass Wave, a plume that is most likely Dowdy (which would be new for me), and 20 or so Micropterix mansuetella, a primitive moth with jaws rather than proboscis, that transpired to be new for vice-county VC32. So the trip was definitely worthwhile from a knowledge gained perspective.