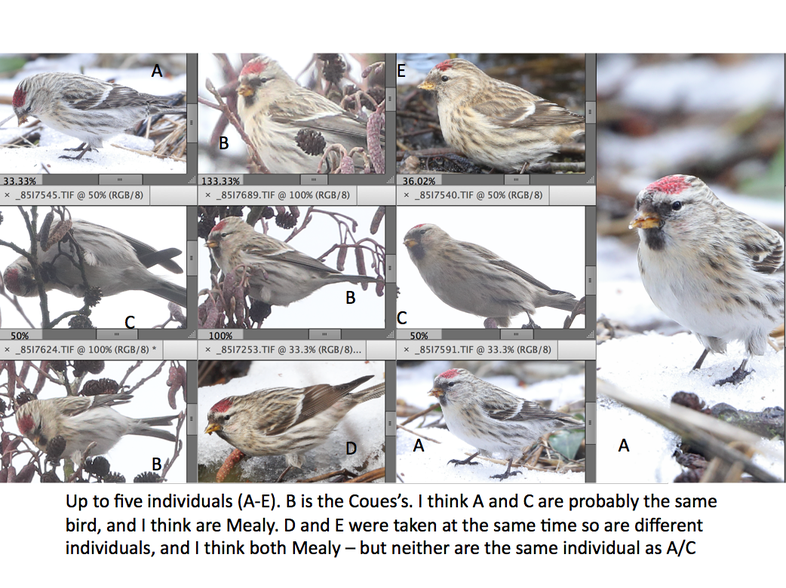 In the field, its jizz was that of a Mealy (bulky, long-time, small-headed, sharp-billed) and we identified it as such. However... the basal colour to the upper parts, the relatively plain ear coverts and the peachy flush to the breast sides in particular, plus the consistent tones to the mantle (no tramlines) have caused some to ask me if I was confident that it wasn't a Coues's. I also received questions as to whether it wasn't THE Coues's, appearing different on the shady ground rather than high in a tree, against the sky. Sadly, we saw neither its undertail-coverts nor its rump, although one photo above does seem to hint at an at least partly white rump. I also have an inkling that it's the same bird as the one in the preceding set of photos. If so, then I'm (even) more confident that it is a Mealy. But I would be delighted to be corrected. So - comments please, via Twitter or using the e-mail contact form on this website!

So what about the original collage at the start of this blog? How many individuals, and with what identity? Here's what I think they were. But, again, please opine if you feel differently. Redpolls are distinctly confusing, and I'm keen to learn.

Moving back east, Phil, Graham and I picked up an even frostier individual feeding in an alder. The views were poor, against the light, but it was a big, long-tailed bird with a small head and long bill (although, when we initially saw it, it appeared small-billed!). Check out too the broad shaft streak on the longest undertail-covert. After a few minutes, we were happy that this was a Mealy too. But it doesn't seem to be either of the previously pictured individuals. 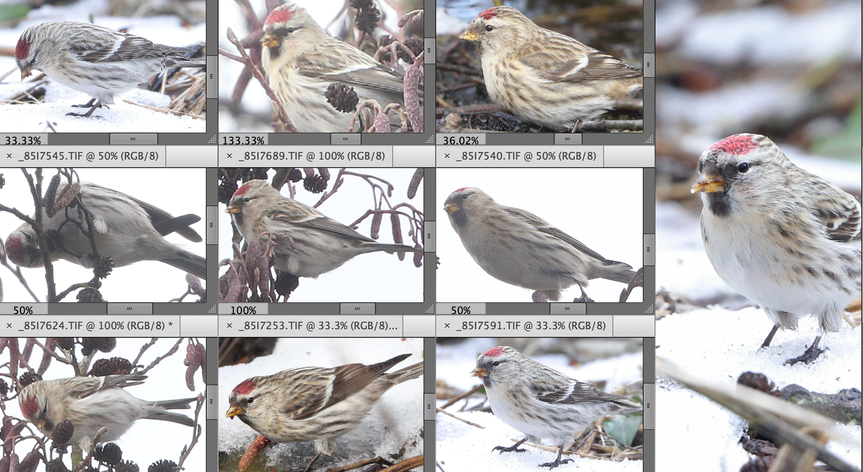 The flock(s) gave us the run-around for the 90 minutes I had available between parenting. The Coues's was only picked out - by Graham Etherington, I think, high in an alder - in the last ten of those minutes. It was also relatively distant from a photographer's perspective, so I've only got a few, heavily cropped shots to offer. But let's start by getting our eye in with what everyone agrees is a (the) Coues's. Small, bull-headed, cute-faced, small-billed, with peachy flush to the face and breast, plain ear coverts, neat flank stripes, a decent (fin not spectacular) white rump and acceptable (if not perfect, with those small dark marks in addition to the neat central shaft streak on the longest feather) undertail-coverts.

So far, so acceptable. Let's also sort another bird - chunky, brownish Mealy with a white tramline - that came down to drink.

Then came the most interesting individual. Initially, this was feeding below the sunny side of a hedge, with the light behind the assembled group of observers. It stood out like a sore thumb. I only saw it briefly at this point, but those who saw it for longer were happy it was a Mealy (among other things, it was much bigger than the adjacent Lesser Redpolls. As the bird crawled under the hedge onto the shady, damp back, I went round and fired off this series of images.

This next individual was drinking at the same spot, a few metres away. It is rather more striking. Also a Mealy, but hoarier.

That's the little-known collective noun for these charming but intensely variable finches. Or should be. Or will now be. A week or so ago, Justin Lansdell impressively found a Coues's Arctic Redpoll just south of Norwich, at Whitlingham Broad. The initial photos, posted on Twitter, did not particularly impress me and few of the pub crew: the structure looked rather Mealy, above all. But one should never rely solely on the camera to give a true reflection of the bird. By the time I finally made it through the snow to Whitlingham, Stuart White had already been and deemed the bird 'much better' in the flesh. Phil Saunders and I, together with others including Dave (and Seren!) Andrews, Dawn Balmer and Graham Etherington, had quite a confusticating time looking at a variety of Redpolls along the south side of Little Broad. I never saw more than a16 or so birds at one time, but there did appear to be more than one flock, so there may have been more. Certainly, the number of individual Mealies now seemingly picked out hints at a larger (if loose) congregation. So let's start with a confusion. What do you make of this lot? How many individuals, and with what identity? (And smirking that Redpolls are all one species, however near the truth that may be, is a cop-out in this context, so don't be tempted.)