Identification of such a tricky recently split species is many pay grades above mine, but I'll venture a few observations fwiw - cos blogs let you do that...

I am not capable of a critical analysis of sonograms to determine how close this bird is to Eastern Yellow (tschutschensis or plexa) rather than, say, the feldegg group - but I have seen one comment that suggests that the 'buzzy' downstroke is more akin to Eastern Yellow. Looking at the sonograms below for Eastern Yellow, contained in the Dutch Birding paper, I can sort of see that. It also looks similar The same paper suggests that the 'south-western' group of Yellow wagtails, inc feldegg, can give rasping calls akin to Eastern Yellow, but that they are diagnosably different. (I just don't understand how...). Clearly, an iPhone is not a good tool from which to get a convincing sonogram. Others have recorded the voice (and one sonogram from earlier in the week was more suggestive of Western Yellow), and the hope is that they have good-enough cuts to enable a convincing case to be presented one way or another. Sonogram birding, hey? 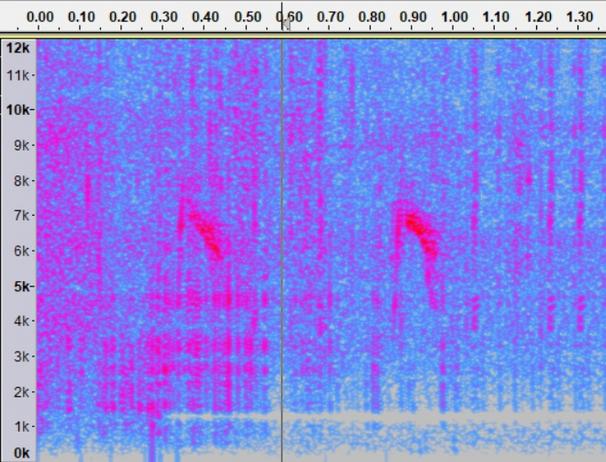 Vocalisations are an ever-more important tool in defining the boundaries between species of bird (and consequent splitting or lumping). So too in identification of extralimital species, although seemingly markedly less in the UK than, as James Lidster has commented, the Netherlands. So it was intriguing to learn of Magnus Robbs' revelation that the Sennen Pipit (presumed to be a Richard's when I saw it, albeit with a confused and somewhat heavy heart) transpired to be a Paddyfield Pipit on the basis of its vocalisation (which I transcribed as 'tzit'). Magnus sets out a remarkably detailed, paradigm-shifting (and not a little bit eyebleed-causing) analysis of the bird's identification here. Critical to Magnus' postulation was the sonogram. We await with bated breath the outcome of DNA analysis by Doc Martin. (But we still don't reckon it is a genuine vagrant... do we?)

Today was another Sonogram Birding day. The spectrogram above was kindly prepared by Dave Andrews. It is taken from an iPhone recording (cleaned up by Dave and uploaded here) of the 'Walberswick Wagtail'. (This cut condenses several calls given by the same bird at the same time on the recording - just removes the dead parts, camera-shutter noise, feet crunching shingle etc.) This confusing bird has been present for two weeks now at Walberswick, Suffolk. But its possible identity as an Eastern Yellow Wagtail has only emerged in the past few days. Here are a few (admittedly poor) photos from today.