On a bird that species-morphed in photos (if not really in the field), it took forensic evidence of wing formulas - derived from photos that would normally be binned - to nail the identification. Most instructive and ultimately very pleasing indeed. So, given ongoing easterlies, what shall I set out to find tomorrow...? I rather fancy bumping into a... 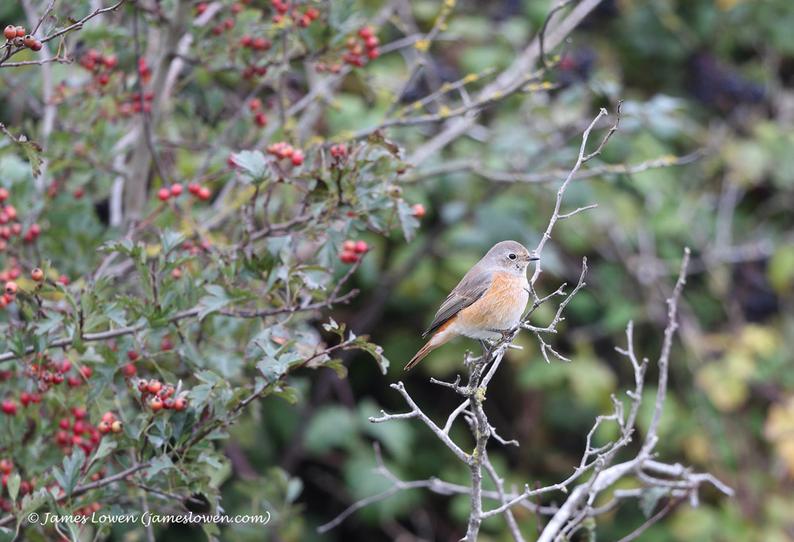 Stuart and Olly had to call it a day mid-afternoon. "Most pleasant," Stuart concluded. I was torn between joining them – and getting some family brownie points – or staying for the last couple of hours before the tide bid our retreat. I stayed. Mike and I sat and sweltered in the sun – hardly top rarity-finding conditions. Then did one final, slow round of the ‘island’. In the sycamore 'wood', Mike glimpsed a bird fly up towards a pine. We waited: nothing. Then we glimpsed it again: a Phylloscopus, we thought. But naked-eye views. We waited. Nothing. Then "tzit". A single abrupt call note. "Did you hear that, Mike?" He nodded. Gotta be in it to win it, I thought, and played Arctic Warbler tape. Within a few seconds a Phyllosc appeared in the nearest trees. WTF? Its large, chunky form teased us behind leaves until popping its head out - its long, strong head with a long supercilium, angry look (thanks to a thick dark eyestripe) and big old pink bill. Mike later admitted being too shocked to speak, but I found words: "ARCTIC!" As I scrabbled for my camera, Mike managed a few shots and was pretty sure he heard it call back at the tape. I buggered up my settings but, before the bird vanished, just about managed a flight shot that would later prove essential in confirming the identification. And we did need to confirm the ID for by the time Ash Banwell had returned and relocated the bird, it turned into a chameleon. Not literally, of course. That would have been too epic. But all of us, particularly Ash, managed to take some photos where it appeared disturbingly like a Greenish Warbler. Round-headed, gentle-looking with a narrow supercilium meeting on the forehead. Check out these two images, taken five frames (a couple of seconds, if that) apart.

There was an elephant in the room of course. Arctic Warbler has brownish legs. Our bird's were strikingly pink. Or, when we looked closely at photos, strikingly pink behind on the sides, but dark brown in front. And Mark Golley kindly tracked down some images of pink-legged Arctics - and Greenish always has grey legs. Even so, it was a niggle. As was the bird's ability to morph its head pattern between Arctic and Greenish. We got a bit nervous; had we bished up? Mike played Greenish tape... and the bird approached him. For the third time, WTF?

Day three was different. I wasn’t meant to go out at all. But I woke at 5am and decided to cram a day’s book-writing into seven hours, then head back out - to somewhere with habitat suitable for an Arctic Warbler. By 8am, I’d changed tack – deciding to go out earlier. By 830, Mike Buckland had said nothing was doing, so it was all off. By 915am, I had flipflopped again and was on the road. (How could I not? I just love bird-finding.) Shortly after 1030am, I was walking out to East Hills (where a Greenish Warbler had been seen the previous day) with Stuart and Olly White. “We’re going to find an Arctic Warbler today," I said. (If Mike doesn’t find it first, I thought.)

Most of the time, the head pattern was constant. Long supercilium, kinked (and broadest) over the eye, and kinked behind the ear coverts. Big dark eyestripe on lores, particularly thick behind the eye. Mottled grey ear coverts. Plus a sense of grey breast-side and flank streaking. 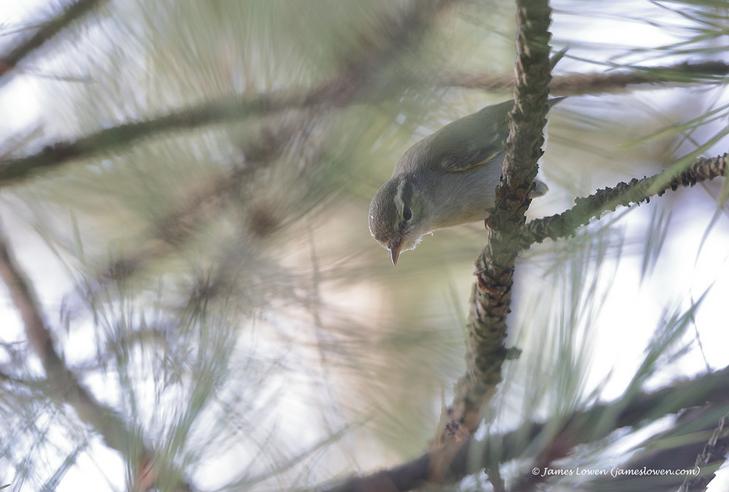 "This week," I told two friends on different occasions, "I'm going to find an Arctic Warbler in these easterlies." Both kept quiet, doubtless thinking: "Yeah, right." My first two attempts, including with one of those friends, ended Phyllosc-less. The best we managed was this rather lovely Redstart on an afternoon when low cloud anda bit of drizzle promised more.

Which was when the problems started. Ash's Greenish-like photos prompted several queries ("Did it call?"; "Did it really look that round-headed?"), understandably implying that we had misidentified the bird. Rapid perusal of the photos did little to reduce the uncertainty. It was either the most Arctic-like Greenish I had seen, or the most Greenish-like Arctic. A fascinating, instructive and unsettling bird that demanded further investigation. So the three of us resolved to return and nail the critter the following morning. Just one problem by the time we had re-explored the Hills. It wasn't there. Nor was anything else (nearby Brown Shrike aside, of course; but we didn't find that, so we'll gloss over it). With no new evidence to gather, we turned forensic on what we had. If we could find a decent spread-wing shot or two, I suggested, we might be able to suss the wing formula, which would surely tell us one way or the other. Back home that night, Mike and I independently got to work and reached the same conclusions (me with some help from ringer friends who confirmed what I thought I was seeing; thanks, guys!), which were quickly corroborated by Paul Harvey. 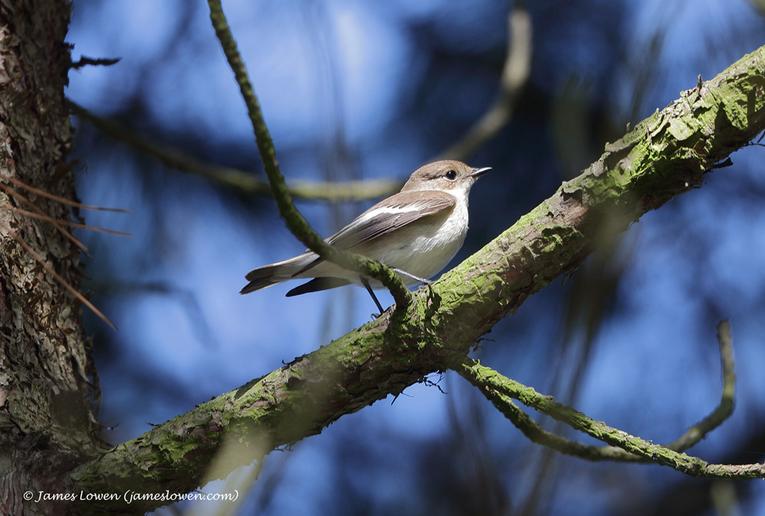 I also got a shot which confirmed the dark forehead (rather than the supercilia meeting there) - contrasting with Ash's shots and my first 'OMG it's a Greenish' image above. This same image shows an interrupted greater-covert wing bar (another Arctic feature; Greenish usually shows a neat line) and a hint of pale fringes to a median-covert or two. 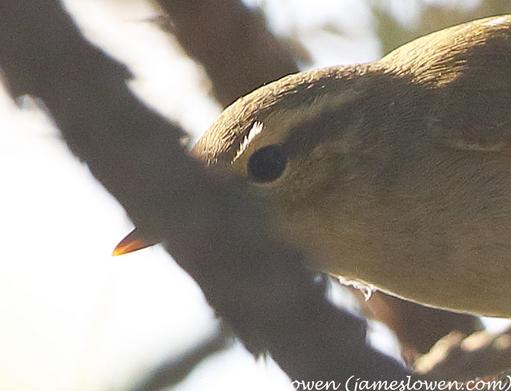 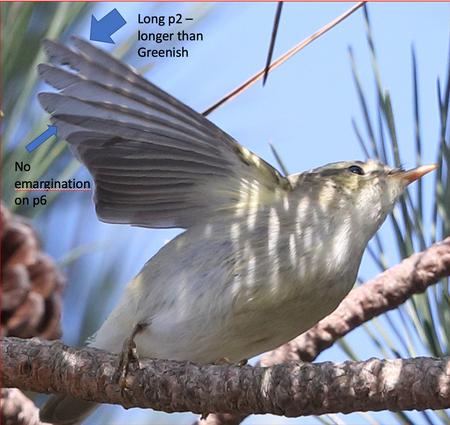 When doubting ourselves, we took a step back. It was bigger than a Willow Warbler, and chunkier too. It moved slowly on pale legs. It had called tzit - even if we hadn't managed to record it.​ It simply could not be a Greenish Warbler. We left the 'island' a happy trio - even more so when we bumped into both Redstart and Wryneck on the Saltmarsh before reaching the 'mainland'. As it was clear that stuff was still arriving, I persuaded Mike to chance our luck with a walk east before dusk. We saw nothing. Had we walked west, perhaps we would have found the Brown Shrike discovered there the following morning (and which surely arrived the afternoon we were there). But you can't have everything - and we returned home very happy with the day's work. A plan hatched and executed successfully - and bringing up a nice self-found milestone in the process. 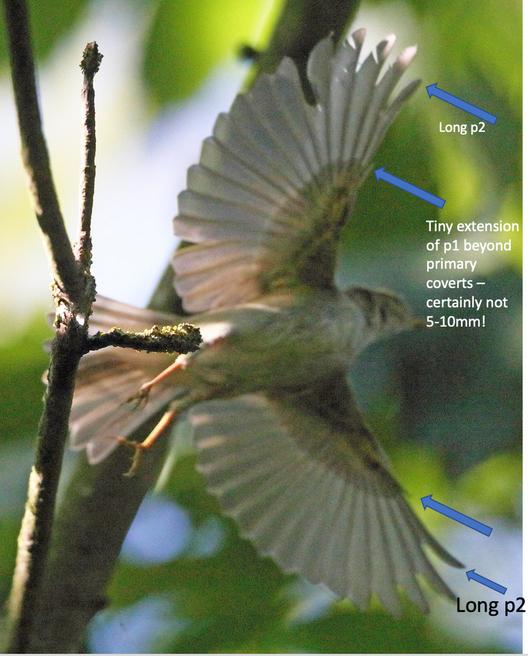 We joined forces with Mike. "Ortolan at Burnham Overy," he told us. I started fuming. Jack Morris and I had been there the previous day, when the bird must surely have arrived. We discussed tactics. "It feels like the kind of day, " I ventured, "when you just have to keep going round and hope to be there when the Arctic Warbler drops in." Each half-hour brought a drip-feed of new arrivals. Another Pied Fly appeared where there weren't any previously. Ash Banwell apparated and found a Ring Ouzel inside the little sycamore wood; we watched it fly on to the saltmarsh, then back to the wood... and evaporate. A Garden Warbler shared a tree with a Lesser Whitethroat, then both vanished.

A brace each of Lapland Bunting and Curlew Sandpiper on the saltmarsh made for a pleasant start. By the time we had joined up with Mike, there were suggestions that something was very slightly happening. A vocal Pied Flycatcher in a tree where Mike hadn't seen or heard one; seemingly fresh-in. A Wheatear at the top of a pine tree - a most bizarre sight and assuredly fresh-in. ("New species," quipped Stuart. "Pine Wheatear.")