Wildlife of Madeira and the Canary Islands

This book is an impressive addition to the burgeoning (and very good) collection of Princeton WILDGuides Wildlife Explorer guides, which are photographic guides to key global wildlife-watching destinations. I reviewed the recent Ecuador volume in Neotropical Birding magazine earlier this year. This volume covers the birds, (marine, land and aerial) mammals, herptiles (native and introduced), dragonflies/damselflies, and butterflies of the Canaries and Madeira. Both areas (but particularly the Canary Islands) are on the tourist trail – indeed, both feature prominently in my own latest book, 52 European Wildlife Weekends – so this book anticipates a decent audience.

This 'WILDGuide' looks, reads and feels very nice indeed. (Have a 'look inside' by clicking here.). An excellent, informative introduction offers a biogeographical overview of the areas covered, details on key habitats and a synopsis of key wildlife sites. The species accounts, which form the bulk of the book, are concise and well written. Identification insights complement essential details on altitude and distribution, the package helping you find and recognise your target species.

The photos are almost uniformly excellent with only occasional softness of image (as with the Barn Owl Tyto alba) or awkward position in the subject (was there really no better image available of Tenerife Kinglet Regulus (regulus) teneriffae?). Where relevant (e.g. birds often seen in flight, or with different male/female plumages) more than one pose or plumage is depicted. Plenty of space to each species: even the most packed double-page spread features the accounts for just five species, illustrated by 10 photos. In WILDGuides, the design lets the creatures breathe.

If you are a birdwatcher (only), you probably do not need this book over and above Tony Clarke's Birds of the Atlantic Islands, which uses artwork rather than photographs and is more detailed. For the birder, Bowler's guide has a drawback in that space constraints (or a decision to prevent birds – by far the region's most speciose faunal group – from dominating) has restricted the number of bird species covered to 163. Although, for the most part, this causes no problems, it does mean that migrant birds that birders often encounter (indeed, that they sometimes specifically look for) such as Olive-backed Pipit and Yellow-browed Warbler are not illustrated, but merely consigned to an appendix.

If, however, your interest in nature goes wider than critters with feathers, this is a must-have book for any trip to the region covered. There is simply nothing else like this guide on the market – no similar collation of key faunal groups into a single publication. Given the considerable levels of endemism in, for example, reptiles and butterflies, it makes little sense to rely on lugging a series of European guides with you. A single book covering all key species across the key faunal groups is so much more portable and user-friendly. If your wildlife interests are wide, this book is indispensable for your visit.

That's not to say that I don't have a few grumbles. For my taste, the simplified approach to mapping is a little too basic. It merely indicates presence on an island rather than distribution within. To get the necessary information on where the species occurs, you need to read the text. A second regret was the exclusion of (at least day-flying) moths – surely a worthy group to include given the massive increase in enthusiasm for moths. A few notable plants – orchids, say – wouldn't have gone amiss either.

And if that weren't annoying enough, it's only at that point that you find out that 'Tenerife Kinglet', which the text stresses is 'endemic to the western Canaries' – implying that it is considered a species-level taxon by the author – is rather less taxonomically certain: it is 'Regulus (regulus), so may still be a subspecies of Common Goldcrest after all… In a region where endemism really matters (this is Europe's answer to the Galapagos, after all), this really should have been a problem to avoid creating!

Nevertheless, grumbles aside, this will be the first guide i pack for my Macaronesia trips. Indeed, it will be the only field guide I take with me. And with that, I'm off to see some more of those restricted-range lizards and that wretched Eastern Canary Skink that has eluded me on several visits to Lanzarote and Fuerteventura! 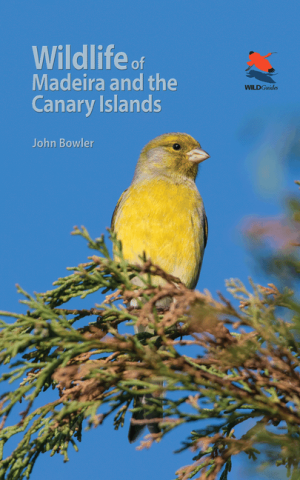