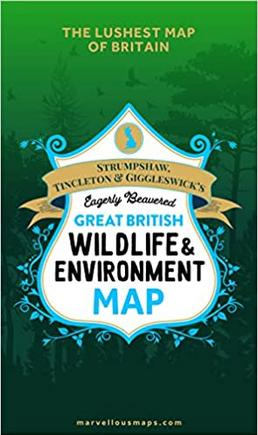 I have not seen anything like this intriguing – indeed, captivating – map. It comprises a crazy compendium of wildlife-watching locations in Britain, experiences and phenomena, infused with some environmental-activism history. The size and shape of an OS map, but double-sided, it provides ample inspiration for getting outside somewhere new, and seeing something different.

A lot of content is crammed into not much space. The names and top wildlife highlights of four hundred sites around Britain (‘Britain’s best bits’) form a thick undergrowth across one side of the map. Quite a number of locations were new to me (Hurtwood in Surrey, for example, which harbours all six native reptiles following the reintroduction of Sand Lizard and Smooth Snake), so there’s plenty to get you trying somewhere new. These cover a huge range of wildlife from snake’s-head fritillary to fen raft spider, so the map goes way beyond simply celebrating the glitzy and iconic. (Not many moths that I could spot, though...) I had the odd grumble. The east side of Yorkshire was oddly sparsely marked, while the occasional site was marked with out-of-date highlights: Golden Orioles are long gone from RSPB Lakenheath in Suffolk, for example.

The plethora of wildlife-watching locations may be what catch the eye (and the reverse of the map has a neat route for joining them all up into the year-long holiday of a British lifetime). But there is more for your money, pleasingly. Fifty top sites are given eye-catching boxouts containing a paragraph of detail. Several hundred tourist locations – natural-history museums, country gardens, ‘clean green days out’ that kind of thing – keep them company. Thirty environmental festivals are listed (I had no idea there were that many; no place for Global Birdfair, mind, which was presumably announced after the map went to print). Seventy green initiatives are celebrated and a hundred pieces of environmental trivia test your knowledge of who has done what where. And all are communicated with a nice dose of humour: the map was "eagerly beavered".

In summary, this is a rather informative, inspiring and fun product. In the current era of staycations, the rest is up to you.