Then let's home in on the outermost upper tail covert on the left hand side of each bird. Again, only Birds A, B and D. In each case, the pattern is the same - a dense, dark triangle, narrowing to a point.

Put these two minutae together, and the answer seems to be that 'Birds' A, B and D (and presumably 'Bird' C too, given the similarity in breast streaking and near-identical streak on the longest undertail-covert) all relate to the same individual, the Coues's, as photographed in different light situations and from different perspectives. This simply astonishes me. In the field, 'Bird B' - feeding at the top of an alder - was a clear Coues's. In the shade and on the ground, 'Bird A' looked big and hoary; we were confident that it was a Mealy. Also on the ground but in dappled sunlight, 'Bird D' looked fairly coarse and big-billed; we called it as a Mealy. So we have extracted what appears to be surprising clarity amidst this confusion of Redpolls. In my blog yesterday, all birds featured apart from Bird E were the very same individual Coues's. Or do you think different? ​What amazing birds Redpolls are. At least that something on which we can hopefully all agree.

My thanks go to all the people who have contributed to discussion, mostly on Twitter, but particularly to Josh, Stu, James, Phil Saunders and Dave Andrews.

A reminder of the birds involved

Prior to posting, I had spent quite a lot of time trying to work out whether Birds A and D were actually the same individual and, more controversially (and contra our in-field identification, which majored on our impressions of hefty size and long bill), these were actually the same as Bird B, the Coue's. I wasn't confident enough to call this, partly because of our in-field structural perceptions and partly because I couldn't quite get the flank streaking to match (though it was pretty damn close). That said, the smudgy pattern of black on the lores and forehead seemed to be pretty damn similar and wasn't there a hint of pink at the bottom of the ear coverts, below the left eye, in each of the 'Birds'?

Josh Jones had challenged me on the evening of the 4th about Bird A, which he felt was a Coue's. Seeing my blog, he reiterated this, arguing that Birds A and B were surely the same individual. Stuart White came to the same conclusion, independently: weren't these the same bird, just in different lighting conditions. So I scrutinised the photos again, looking for clues as to whether one individual was involved or more. And found something that completely took me aback. Before I was able to post what follows, James McCallum contacted me, presenting the very same conclusion that I reached. So that's three birders vastly superior to me all independently thinking the same... which is that Birds, A, B, C and D are all the same individual, the Coue's. 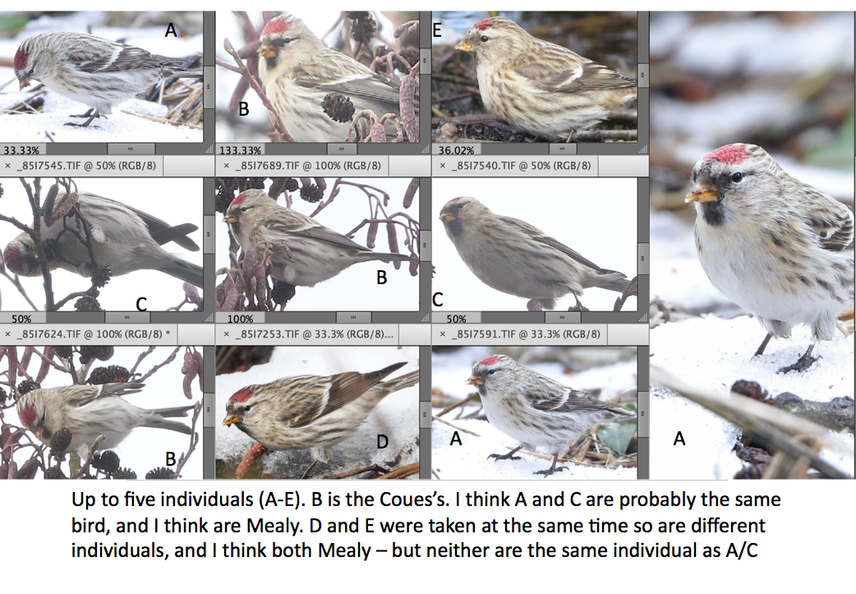 There has plenty of useful Twitter discussion on various Redpolls at Whitlingham, Norwich, Norfolk. (That said, the only consensus seems to be that Redpolls are brilliant creatures... whatever their actual identity!) My contribution to the fat-chewing came with a blog yesterday, which was based on observations and photographs on 4 March. To recap, this was where my thinking was at the time of posting.

Now let's enlarge the above photos of Birds A-C, and focus in on the ear coverts. The quality of the photo of Bird D, doesn't help, so it's not in the analysis. To my eye, that pink below the left eye looks identical in each photo.