I haven't done a huge amount of nothing so far, though it has certainly been better than last spring, but one of my observations from last winter has come out in print. My paper on same-sex sexual behaviour in male Winter Moths - witnessed in a Norfolk woodland one December evening - was published in Atropos 70 this week. I will also be writing up the (bewildering! enlightening!) experience for BBC Wildlife - a short article will be out this summer. 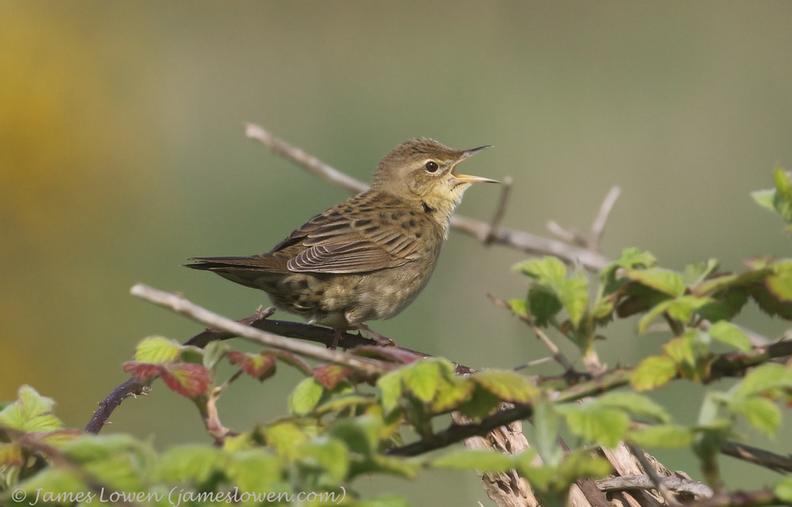 One highlight that I don't think I've mentioned so far is the frequency of encounters with Grasshopper Warblers this month. I'm not sure whether there have been more around than normal, but presumed transients seem to have turned up in the odd slightly unusual place. One such example was this individual, which showed very nicely (if briefly) near Stiffkey on the north Norfolk coast, a short walk from the still-wintering Dusky Warbler, with which I finally caught up recently. But I'll spare you my pics of that...

Although I have caught a couple of female Emperor Moths - searingly large, stunningly attractive silk moths - by night, I had never encountered one by day until last week. Given all the male Emperor Moths charging around RSPB Minsmere (celebrating its 75th birthday this week) while I was focused on Adders, and the chance discovery by one regular there of a female the day before I visited, I was hopeful that keep my eyes close to the ground would reveal something winged as well as much that was serpentine. Sure enough, on a day that otherwise proved to be frustrating for snake-watching (one mating pair, but under cover; a dozen males slithering around but showing no interest in two secluded, too-small-to-mate females and none photographable; one tail-end of a black male), the highlight was definitively an Empress that I discovered in the coastal dunes, in low vegetation. She was rather battered, whether the result of a predatory encounter, an over-eager male or the rigours of life among brambles, but very placid. After an hour with her, I left her be. By the time a friend got there in the afternoon, she had disappeared.