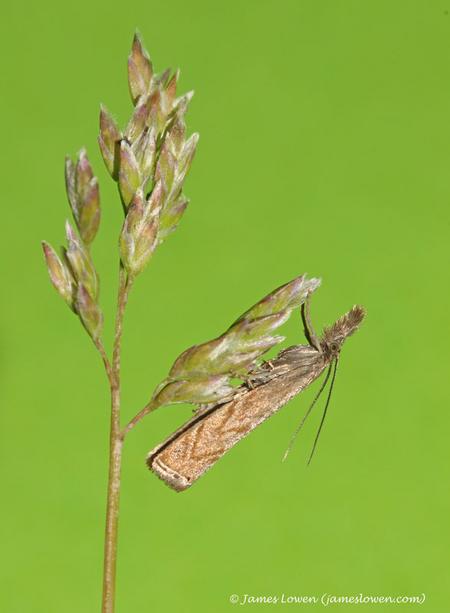 Once your garden moth list is nearing 700, if not long before, it is micro moths that provide the best chance of new garden species. I've caught a fair few micros new for the garden. The most surprising has been Epinotia nanana - a nationally scarce species known from just two Norfolk sites - of which I have caught five this summer (pending confirmation by gen. det.). The nationally scarce Bucculatrix cristatella was new for the garden; indeed, I actually caught a couple before working out what it was! I'm awaiting a potentially interesting outcome on a tiny Nemapogon species (like a dwarf Cork Moth) that may be similarly exciting. A Delplanqueia knot-horn also needs confirmation, but is likely to be inscriptella rather than the recently split consortella. Another recently described species - known to science only since 2017 - was also new for the garden this summer: Anarsia innoxiella. Gypsonoma minutanana was another Nationally Scarce newbie, but Grapholita janthinana an overdue garden first. Platytes cerussella (at the bottom) had probably wandered from the Brekcs one warm night. Not new for the garden, but still rare in national terms was a likely male Caloptilia honoratella (tbc) plus a couple more C. hemidactylella. The latter pair now need dissection for records to be acceptable. Roll on the day when external characteristics can be determined for extreme individuals, at least.

A bit of a catch-up on garden moths. Sadly I was away for the heatwave, so couldn't match the 200+ species of moths that one Norfolk friend caught in one night recently. Although it hasn't been an epic summer for garden mothing at home, there have been a few interesting species - complemented with a few that reached the gardens of other friends.

First up was pleasing confirmation that Red-belted Clearwing survives in our garden (or, rather, in the apple tree that dangles over from next door's garden). My lure is defunct so I haven't recorded at home since 2020, and the only other lure tried here this year had also probably expired, so it was a relief when Phil Saunders brought round a working set of pheromones.

Also notable among macros were a few Lunar Hornet Moths (best lured early morning - indeed, already in the trap by the time I have got up and checked it for micros, having left the lure out overnight), the year's only Festoon (strictly a once-a-year moth at home), only my second garden White-pinionSpotted, and the odd Toadflax Brocade.

Also a highlight was a new macromoth - albeit one long hoped-for, given that it is known to wander from its Breckland hearth. Nevertheless, it was a fist-pump moment when I spotted this Marbled Clover nestling on an egg-tray one COVID-dominated morning.