Here is the call of the abietinus, together with the spectrogram, which looks identical to an abietinus recorded in Poland in February 2018 (Xeno-canto XC402171).

The origins of the 'Deathie' are unclear, though one theory - based partly on its unusually static habits and apparent ill health - is that it pupated partly in Europe, then was transported via soil to a UK garden centre, where it finished pupation and eventually emerged. A sad end to what should have been a fine life. 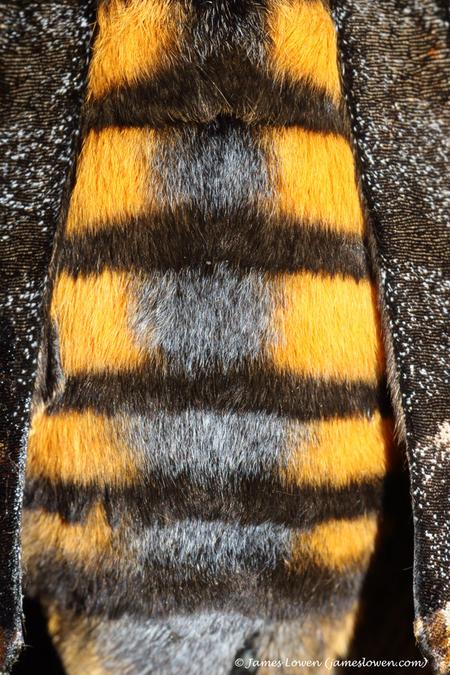 At home, there was plenty of vis mig early on, with the 5th, in particular, providing about 1,600 thrushes of four species. But he highlight was a flock of 12 Common Crane (above) that we tracked from east Norwich to west late one morning. The second garden record. A spell of easterlies excited me enough to head to the north Norfolk coast, with Dusky and Pallas'as Warbler surely on the cards, but the best we could dig out were a Black Redstart (which, oddly, was entirely arboreal and gave a Common Redstart-like call none of us had heard before), a handful of Woodcock, and a few Siberian Chiffchaffs (tristis) together with an interesting, grey Chiffchaff subspecies with a striking supercilious that proved to be abietinus ('Scandiavian') given its call: 'swee-ooo'.

The black theme was fundamental to the only classy moth of the month - and a sad one at that. Found in a Broadland garden, this female Death's-head Hawk-moth clung to a pot of petunias for a week before being escorted to my driveway, where it was widely visited before - sadly but inevitably - passing away. The moth had only occasionally fed on the sugar/honey provided and barely moved, except for one short period of walking around, squeaking (as is audible in the video below).

Norfolk's bird of the month came towards its end, and I fortunately I was just about well enough to drive up to Wells and see it: the county's first unequivocally documented Brünnich's Guillemot (there have been others, but they were deemed 'not proven' by the British Birds Rarities Committee). Sadly, the bird died within three hours of its discovery. Nearby, this dapper hybrid Black Brant x dark-bellied Brent Goose showed very well. Although its neck collar is rather impressive, the flank patch isn't extensively white enough for it to be a pure Black Brant and the mantle is not dark enough. Hybrids are regularly seen in the area.

Birders have been whispering for a few years now that 'November is the new October', because of the quality of birds increasingly found in the former month. After the worst October in memory, never has that been more true than in 2021. November has become 'Yesvember'. Granted, the month's star bird - surely the year's star bird, for me at least - was actually found in October: but I didn't get to see the Varied Thrush until 1 November, so it counts for the purposes of this blog. Then there was the Flamborough Taiga Flycatcher - perhaps also found in October, but equally plausibly a genuine November discovery. This blog wraps up a few highlights since that fifth Yorkshire trip of the year (indeed, fifth since July).