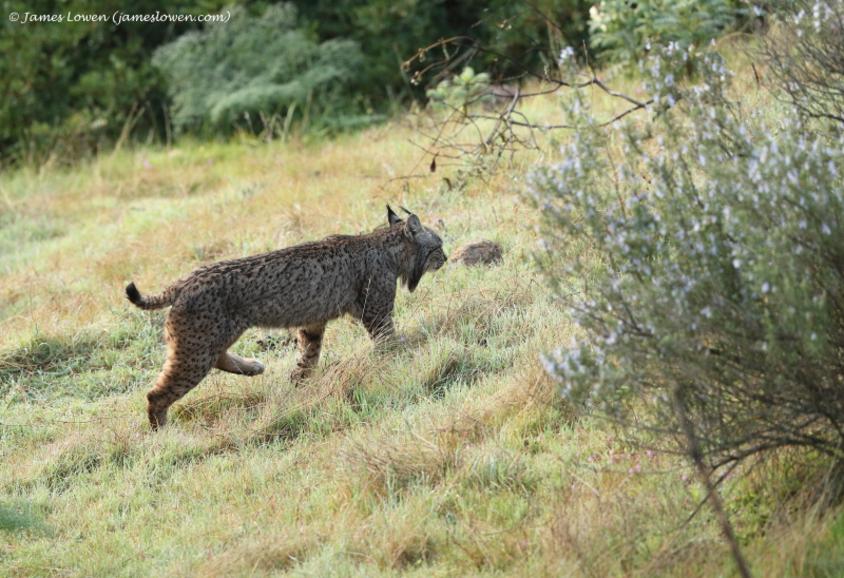 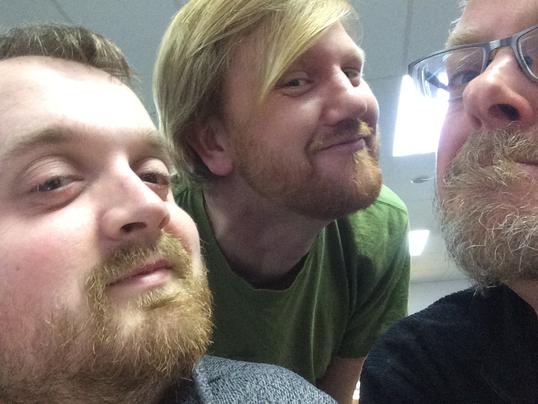 Will took some exciting video footage through his phone and scope, which he has kindly allowed me to upload here and to my Youtube channel. These two videos are copyright Will Soar. Brilliant stuff!

After a little look around, the cat sat down. At which point it started attracting the attention of scores of disgruntled Iberian (Azure-winged) Magpies. This was a tick for Will. What better way to see your first Iberian 'pies?

The following day, pre-dawn, we headed out to La Lancha again. Inevitably, our animal from the previous day did not show. After a couple of hours, some Spanish mammal-watchers called us 500m further west, where they had located a pair of Iberian Lynx. The animal were distant, but showed constantly for three hours: walkaway views! They proved most definitively to be a male and a female, copulating on two occasions. Amazing stuff.

We scrambled five hours kip (albeit sleep traumatised by pre-tick tension) before heading north to the La Lancha viewpoint. With fog rather obscuring viewing, hopes were low.

"There's one." Will spoke with complete calm, and absolute lack of precision. "There's one what?", I asked. "Lynx", he replied, equally calmly. Sure enough, 60m away an Iberian Lynx was sitting calmly, having just walked out from behind a bush. This is the first view we got of the Iberian Lynx - and within 30 minutes of arrival! The shot is uncropped to give a feel for context: a long-eared, drooping jowled feline on a slope full of flowering rosemary.

After a few minutes laze, the Lynx walked towards us downslope, pausing occasionally to scent mark the bushes. 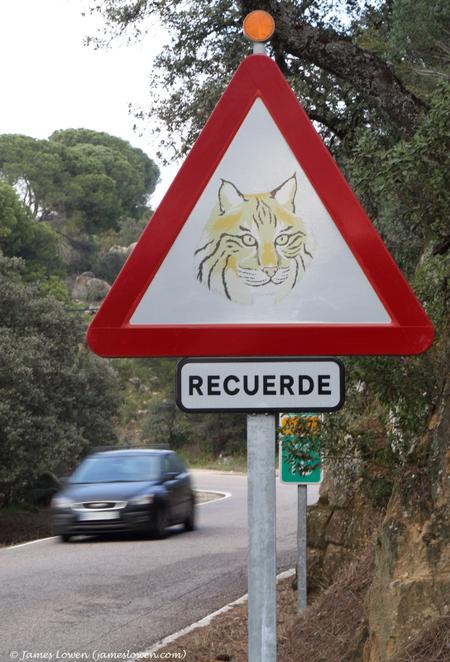 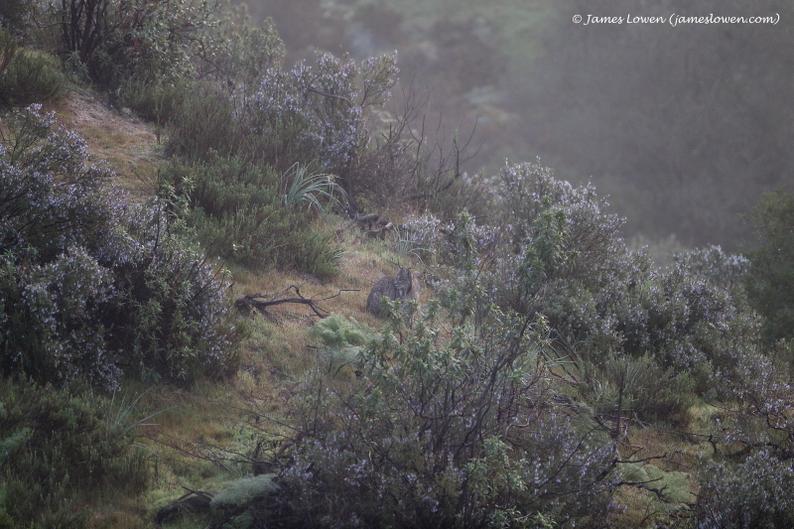 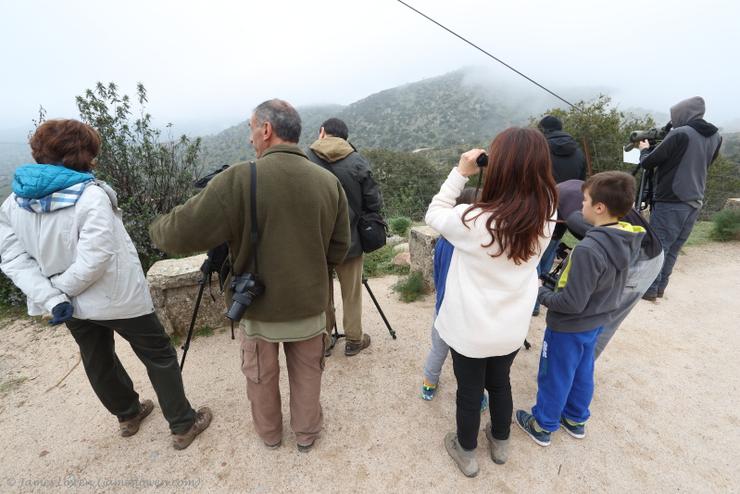 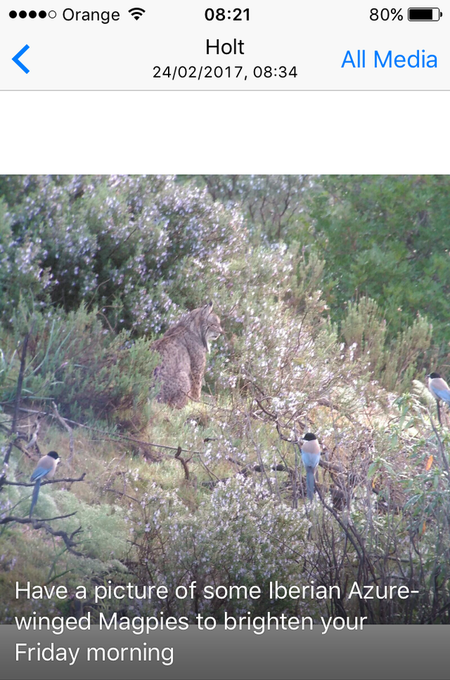 We spent a few hours late afternoon scanning hillsides east of the Encinijero trail, but to no feline avail. No issue. The encounters were better than we could have hoped: a close individual and a mating pair. Game on! 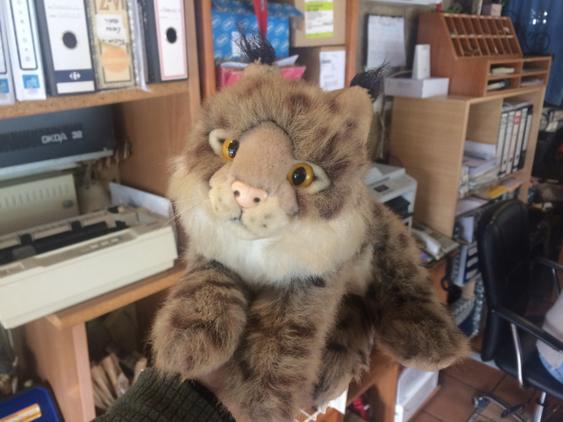 It crossed a ridge so we raced round the other side, 50m further west along the La Lancha road. The animal then gave cracking views at perhaps 25 m range, side on, as it contoured the hillside before finally slipping into dense vegetation and disappearing.

Mikee swiftly tweeted the news out. 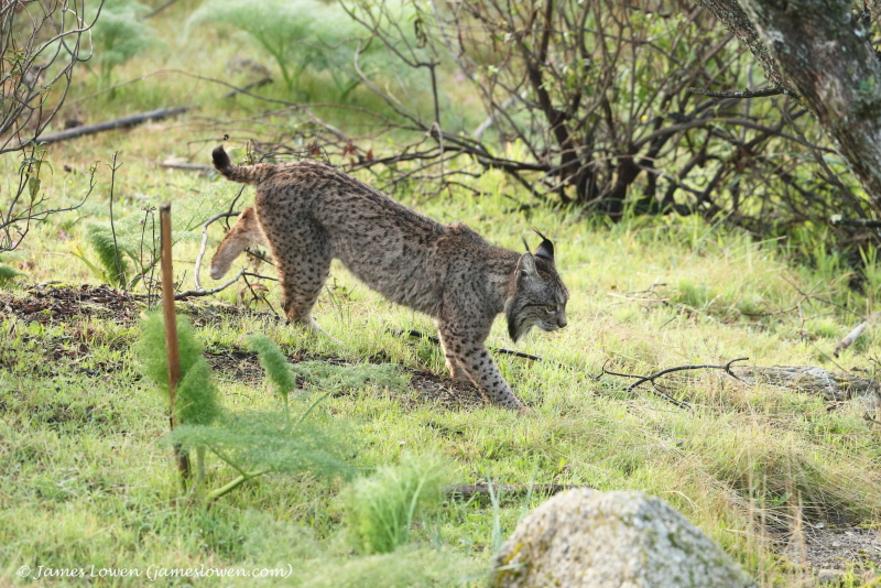 Some of the voyeurs.

And that was that. We scanned further once the fog had lifted, and also headed to the Encinejaro Trail to the south, and scanned there. But no further Lynx sightings on the first of our two days. (Plenty of other brilliant wildlife though - but that merits a separate blogpost.) For those who don't know the area, there's a great trip report by Lee Dingain et al. on Jon Hall's mammalwatching site. Here are a couple of screen grabs, giving the key info.

I have just returned from a weekend in the Sierra du Andujar, in Andalucia, Spain. One of the fun things about writing a new travel guide to European wildlife-watching experiences is that I get to do plenty of in-situ research and try for animals that I have long wanted to see! On this trip (for which accommodation was kindly provided by Complejo Turistico Los Pinos, to whom I am very grateful), I was joined by Mikee Hoit and Will Soar, who both fancied a bit of Mediterranean feline action, for we were after none other than Iberian Lynx, one of the world's rarest cats. Aided by kind advice (in person and/or via trip report) from Dave Andrews, Lee Dingain, Alick Simmons, Andy Symes & Chris Townend, we three beards flew from Norwich to Malaga, eventually reaching Los Pinos in the early hours of 24th.