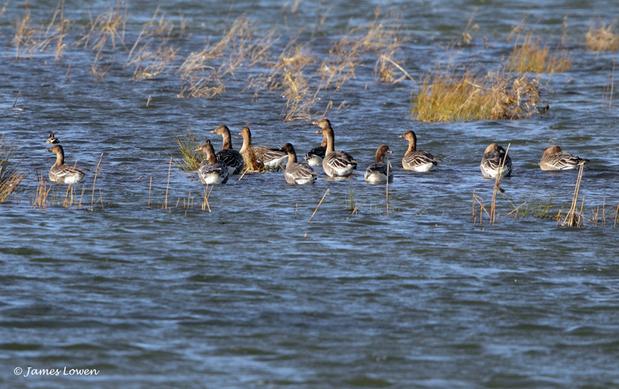 Rarest bird of the day was a flock of 10+ Tundra Bean Geese at Welney. I don’t see Beans of either variety very often, and certainly never in such numbers.

Is it rude for my favourite images of the day to be of one of our commonest species? We called in on the Waxwings at Hunstanton, but the sole remaining individual didn't hang around long enough or allow close enough approach for me to bother raising binoculars let alone camera. Instead, we enjoyed this rather fine Starling.

Final bird of the day was a one-eyed Barn Owl near Prickwillow. This fiend was determined to stay on Yoav’s side of the car throughout the 20 minutes we watched it. Eventually I got a few shots of the bird in its environment. Context can be everything.

Welney offers the potential for framefillers of wildfowl, although getting down to eye level requires advance booking. So these images are ‘make-do’ – but the sharp light means they can nevertheless be pleasing on the eye. The subjects are Whooper Swan, Wigeon, Pochard and Black-tailed Godwit.

At Snettisham, my other desired image was to contrast stasis (birds sitting still, packed tightly together) with dynamism (birds in flight). Again, this didn’t quite work as hoped. But again, a few results are worth sharing. The subjects are Knot and Oystercatcher.

A bird-packed if somewhat frustrating day out in west Norfolk with Yoav Perlman. Yoav has kindly written a blow-by-blow account of the day , which releases me to simply provide a few photographic highlights. The interaction between birds and people was the day’s theme. First for the high tide roost and Pink-footed Goose departure at Snettisham, then for swan-feeding at Welney. I failed to get quite the shots I was after at either event, but there are a few worth sharing.