Quite why I had the affront to try clearwing lures at home (a 1920s bungalow estate in suburban New Costessey, Norwich), I don't know. Reading up on the habitat requirements for Red-belted Clearwing made me think, half-cut as I was, to try and lure that species in my garden. And it worked! On three dates between 3 and 7 July (but not subsequently, despite trying) I attracted up to four individual Red-belted Clearwings in a session.

Everything changed on 24 June. And it has been clearwinged bedlam since. I could never have imagined the success that the lures have brought me, nor the level of enjoyment granted to upwards of 20 folk who have visited my garden, borrowed my lures or come with me on scouting trips. It has been, without a doubt, one of my life's wildlife highlights. And I sense that I am neatly along the road to addiction. So let me pause and take stock of this year's eight species (all considered Nationally Scarce) and experiences. 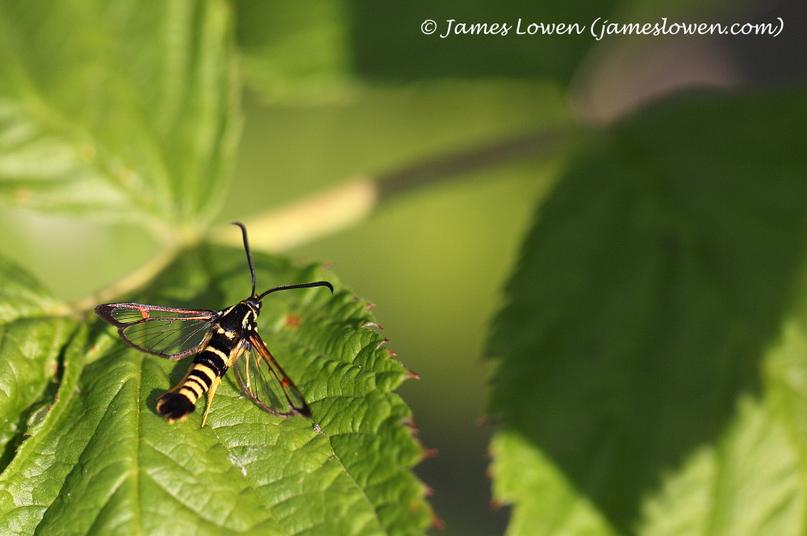 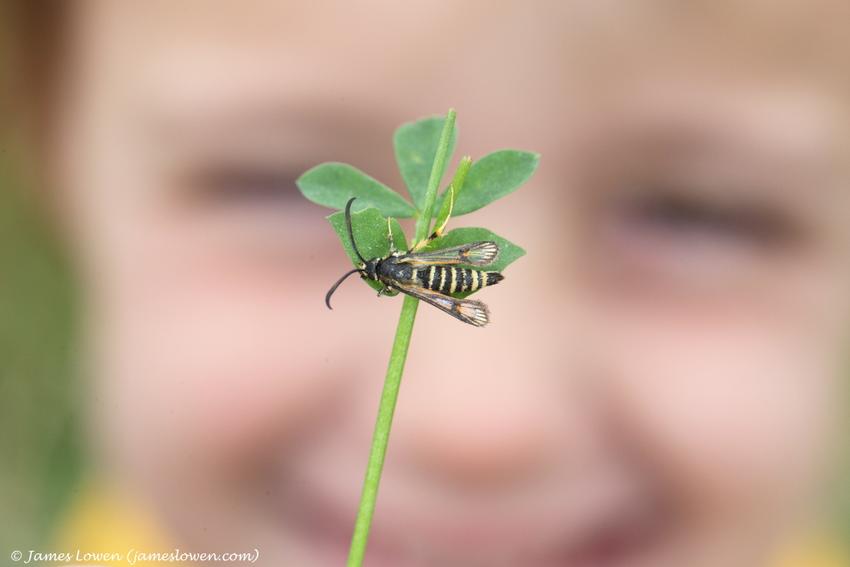 My first attempt for Six-belted Clearwing was at Salthouse on 6 July. I had forgotten my lure, and rummaging through the Birdsfoot Trefoil at the base of Gramborough Hill proved fruitless. My next crack was at Warham Camp. I didn't know whether the species occurred there, but thought it worth a try. On 21 July, I succeeded, luring a single individual. I had one (a bizarrely small individual) briefly there on 4 August.

I suspect that clearwings are much commoner and widespread than current evidence suggests. I wager that as more people invest in lures, greater numbers of most species will be found over a wider area. I am delighted to have played a tiny part in swelling knowledge. As for what's next,  2017 ought to be the year of the remaining Clearwings: Sallow, Welsh and Raspberry. I would love to find Norfolk's first Raspberry, and to locate a Sallow outside of its known range in southern England. Welsh is being found ever more widely, so I have my eye on a few sites. And then, of course, there's Fiery... but it's illegal to disturb that very rare species, so we will be leaving it well alone.

Two days later, messages from the Strumpshaw wardens sent me scuttling eastwards. There I quickly located a White-barred Clearwing. This was a beast, bigger and bolder than the earlier two clearwings. And so inquisitive (or hormonally charged) it both landed on my nose and flew into my shorts pocket. These were the first confirmed records for the reserve, although the species had been suspected on account of the quality of alder habitat on site. 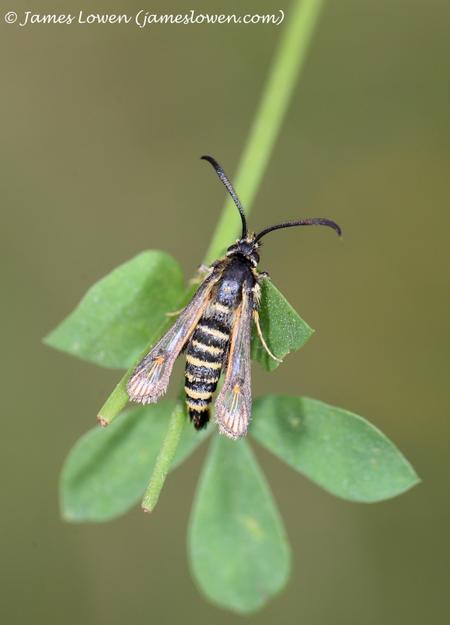 The 7 and 8 July brought the Norwich brigade two new clearwings, both from Suffolk's Breckland. A single Yellow-legged Clearwing managed to escape (err, clumsy me) before being photographed, but an Orange-tailed Clearwing was more co-operative. At the time, I was gutted at my incompetence with the Yellowleg. If only I had known what would happen next... 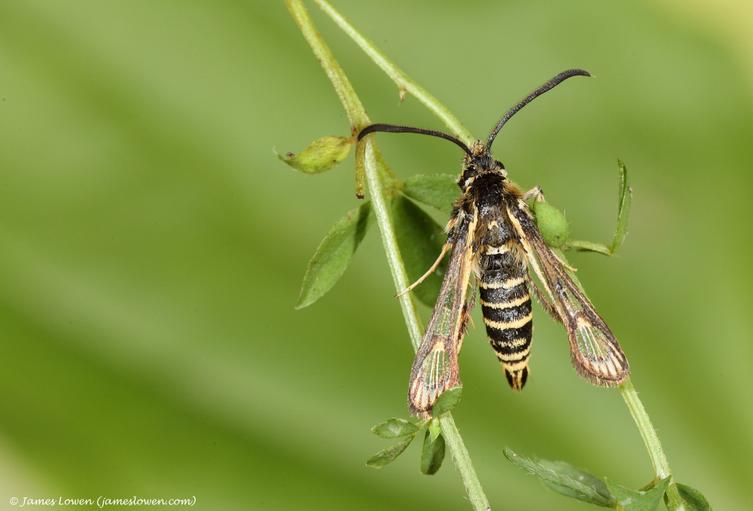 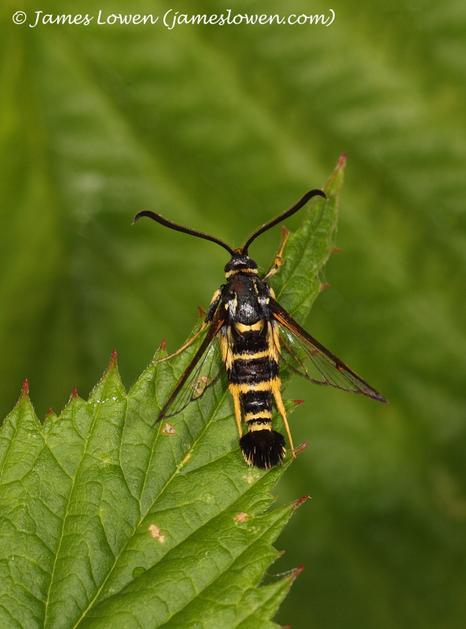 Then on 5 and 8 August, I found four and three Six-belted Clearwings respectively in trefoil along RSPB Minsmere's North Wall. The habitat there looked superb for this clearwing, and so it proved. It seems rather odd then, that the reserve's first and only previous record was last July!

Evidence that the lures were entirely functional and contained pheromones rather than any other substance (or simply hot air) came in the unexpected location of Bluebell Allotments, Norwich. Allotment-holder Dougal McNeill, Will Soar and I met late one afternoon to chance our arm at Dougal's currant bushes. Within seconds we had several Currant Clearwings zipping around. We were elated.

I switched to the VES lure (for Yellow-legged) and immediately attracted in three or four of that species. Wow! These and others I caught subsequently (I have been catching them at will: up to four a 'pop' at any time from 1200-1800, as long as there is little wind and some warmth to the air, until at least 3 August, which was the last time I tried) were well twitched. There can surely be nobody left in Norfolk who still needs Yellow-legged Clearwing...

No, I haven't seen Lunar Hornet Moth this year. That would make nine species this summer, and I said earlier that I have 'only' seen eight. But I have come close. At Titchwell on 4 August, I found what I assume was an exit hole of this species at the foot of a sallow. And I also had flight views of what looked like a small hornet flying around and weaving in and out of a sallow on the Meadow Trail there. The location, habitat and time of day all suggest this was Lunar Hornet, but I couldn't nail it. One for next year.

Whilst I was on holiday, Keith Langdon followed up some gen sent my way by Jim Wheeler, and caught Yellow-legged Clearwing in Earlham Cemetery (urban Norwich). Upon return, I tried there twice... and flunked. On 20 July, I decided it was close enough to the flight season for Raspberry Clearwing to hazard a go at luring Norfolk's first. Knowing that my garden raspberries originated from Sussex (RHS Wisley), I wondered whether they might have transported this new colonist of Britain into East Anglia. So I hung out the HYL (Raspberry Clearwing) lure and waited. Twice a stocky black-and-yellow clearwing came in, and twice it escaped before being netted. The third time it alighted on a raspberry leaf, and I quickly photographed it... and found it to be Yellow-legged Clearwing! 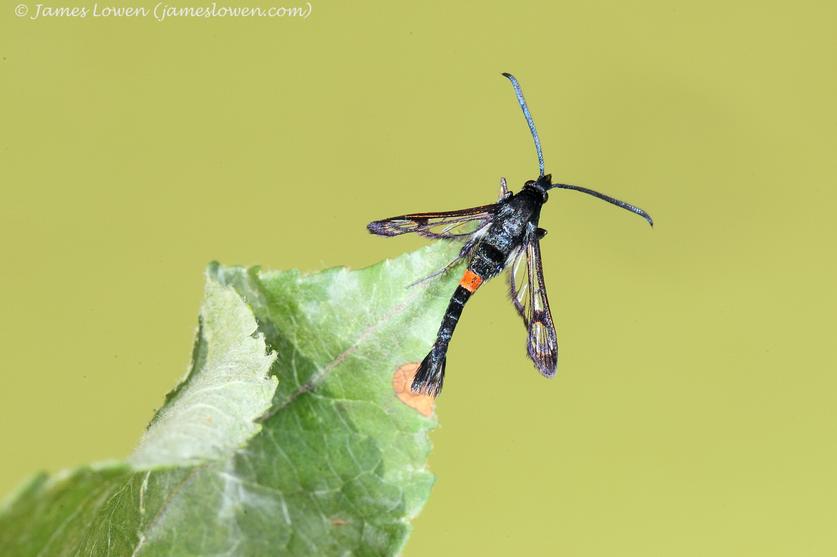 No, this is not me being immodest. The blog title is the tongue-in-cheek nickname given to me by author, birder and moth-er Ed Parnell when I caught the third species of clearwing moth in my garden this year. As anyone who wants to see clearwings knows, there is relatively little skill needed to see these wasp-mimic moths; instead, you just need to have purchased some pheromone lures and then deployed them with a dose of luck.

As we admired these potted Currants, a larger clearwing zoomed into my box of lures. Nabbed, it proved to be a Red-tipped. Game on! 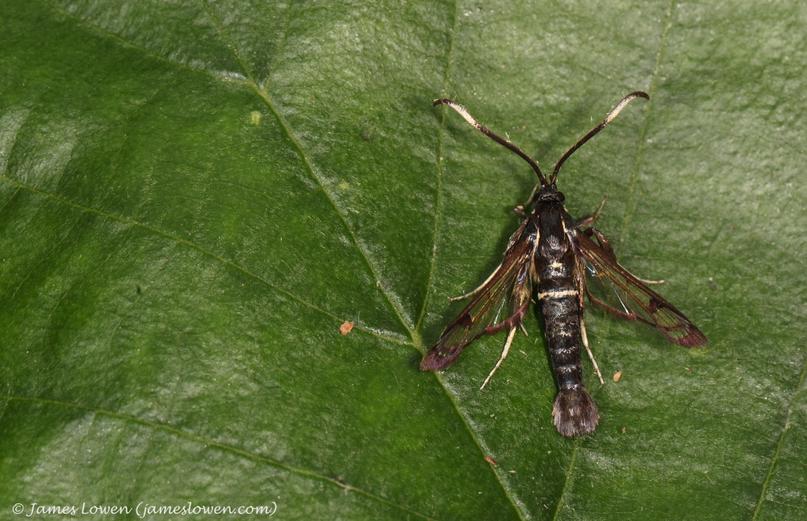 Whilst there were no further encounters with either of these stunners, I came close with Hornet Moth. Exploring a friends' garden in Costessey, I wandered down to the River Tud past their poplar trees. And found several Hornet Moth emergence holes, clear as anything, in the base of two of them. Next year, I shall visit my friends earlier in the flight season, early in the morning, and hopefully watch the adults bask on the poplars.

My principal wildlife-watching goal this year was to see several species of clearwing. I had previously seen only two species: a presumed Lunar Hornet Moth in Dorset a decade ago (before I understood how cool clearwings were) and two Thrift Clearwing on Bardsey last year, whilst twitching the Cretzschmar's Bunting. Last year I tried the lures a few times, notably at Catfield Fen for White-barred Clearwing, but to no avail. Come late June this year, my luck was similarly dire: a few attempts for Large Red-belted Clearwing along Gunton Lane in Costessey, and further jaunts to Catfield Fen (dipped Red-tipped as well as White-barred Clearwing).

Perhaps more amazingly, I hung out a random Hornet Moth lure - and caught that huge species twice, the first time in front of eight or so incredulous Red-belted twitchers. An amazing mimic, right down to flight style (aggressive) and angry buzzing in the net!