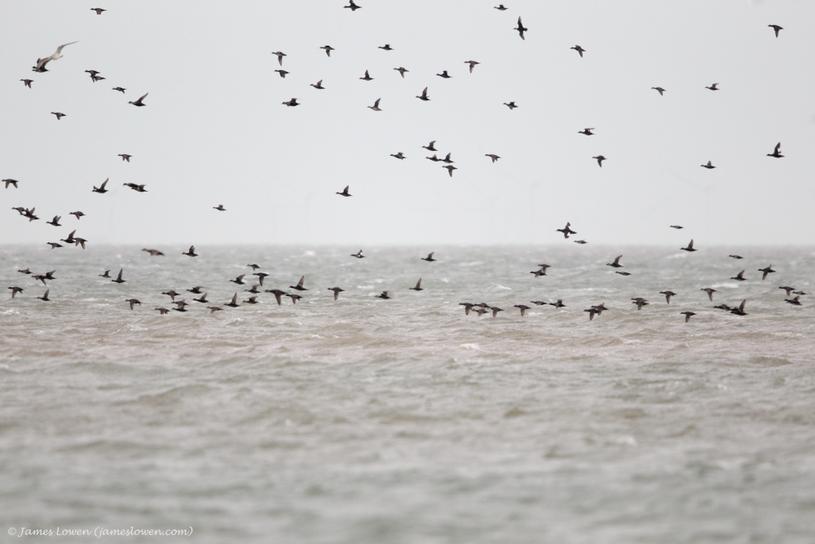 Yoav had been on at me for weeks about taking him to see the Todd's, and today was the day I relented. We planned a full morning of goosing around muddy fields, largely in Terry and Marie Louise's company, before heading to Titchwell to enjoy the seaduckfest at high tide; the place has turned into a mini-Varanger over the past few weeks, with ever-higher counts of Long-tailed Ducks (a globally threatened species, lest we forget), Velvet and Common Scoters.

The breakfast took so long the eat that we nearly missed Titchwell's high tide. When we got there, I even impeded progress by carelessly spotting a snoozing adult Yellow-legged Gull on the freshmarsh - something (gull-watching) for which I solemnly apologise. When we finally reached the beach, the fringes of Storm Barbara had chopped the seas and hurled sand into faces and optics. 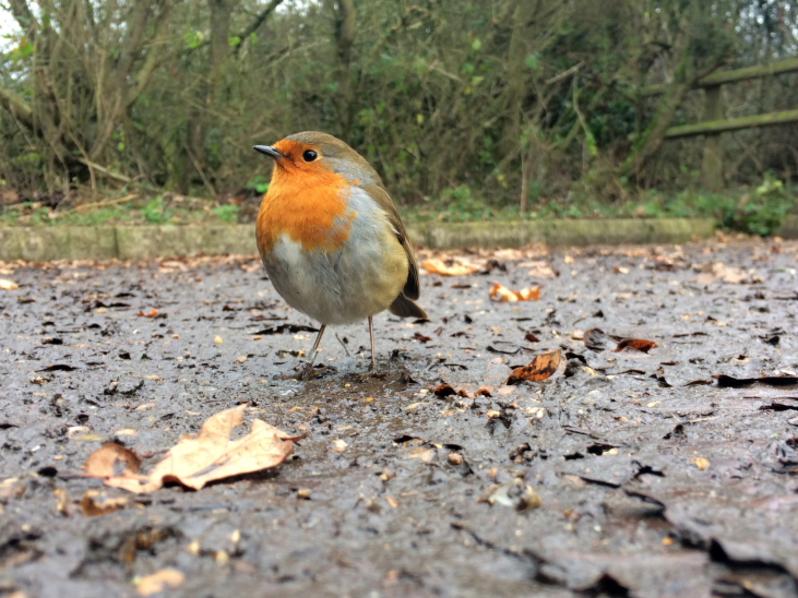 We picked out perhaps a dozen Velvet Scoters and probably double that Long-tailed Ducks, plus a Slavonian Grebe and the odd Red-breasted Merganser. A fine sight - and one to repeat on a flat-calm, blue-sky kind of day. 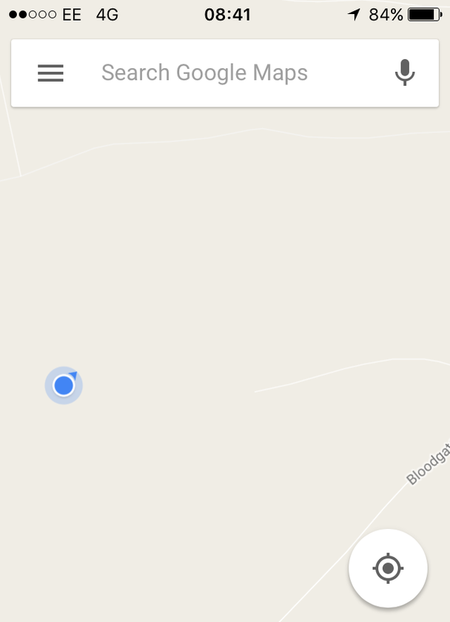 Using gen from Mikee Hoit, who had been doing goose-surveys the previous day, we first scoured some fields somewhere near Syderstone. Getting there involved driving a rather hairily muddy track and indeed - judging by the following Google map image - actually going well beyond whatever Google might constitute a drivable track. Scarred by my experience of getting stuck in a Broadland field last winter, I kept suggesting we turn back, only for Yoav to repeat "It's fine... just give it some gas..." with occasional sage advice such as "perhaps try and stay out of the chasm" and consoling words such as "of course driving at a 45 degree angle is safe".

It's (nearly) Christmas. So I'm talking about a Robin, right? How twee. 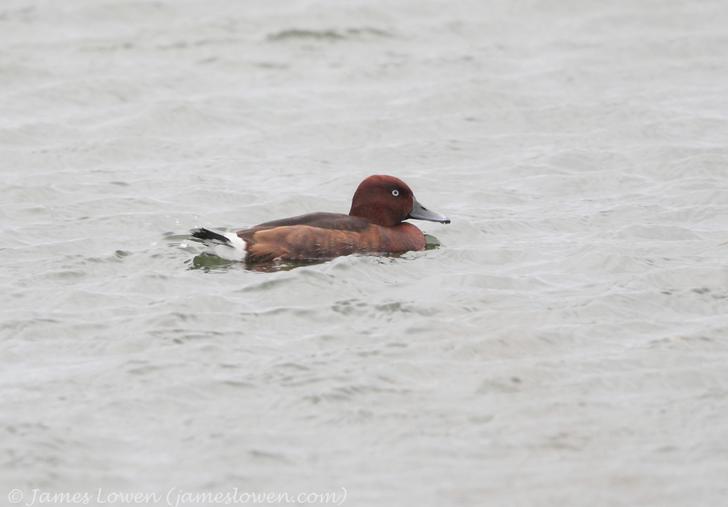 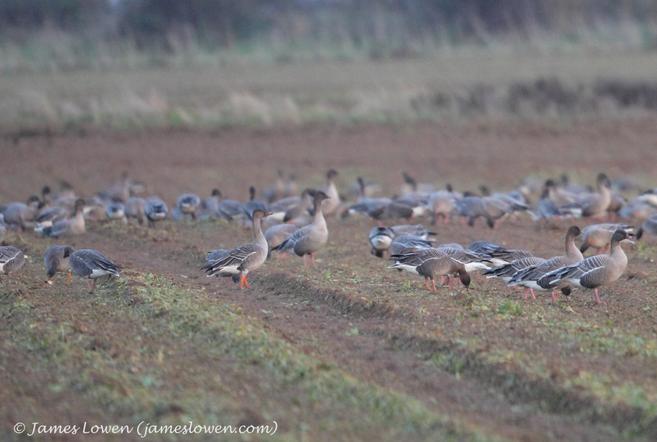 Leaving the beach we headed back to the car park via Patsy's Pool, where the drake 'Ferruginous Duck' had been refound. The wind was howling and the gloom thick, but that didn't prevent this smart duck from showing rather well. Quite what it is I'm not sure. Most people seem happy that it is Ferruginous, but for me the head is a little rounded, and it looks a little dinky. The less-than-brilliant white eye might be explained by it being a first-winter... or by some form of other diving-duck gene somewhere in the grandparentage. Either way, it was pretty and a russet- (if not red-) breasted end to the pre-Christmas day.

Apart from the two gander stars at Docking, we saw a fair few Tundra Bean Geese (below) and some White-fronts, a single Greylag ("definitely wild, perhaps Icelandic") and a couple of yukky Pinkfeet that had developed big eye rings and white forehead blazes, as if doing a really bad impersonation of a Lesser Whitefront. Sadly, we couldn't find Mikee's Greenland Whitefront, so jettisoned the half-baked idea of trying to see 14 goose taxa in Norfolk within 24 hours. (Go on, see if you can list them...). 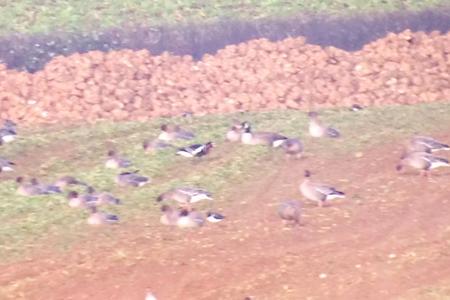 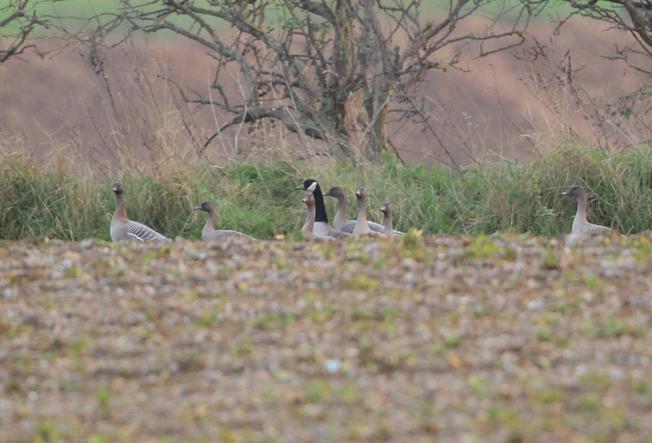 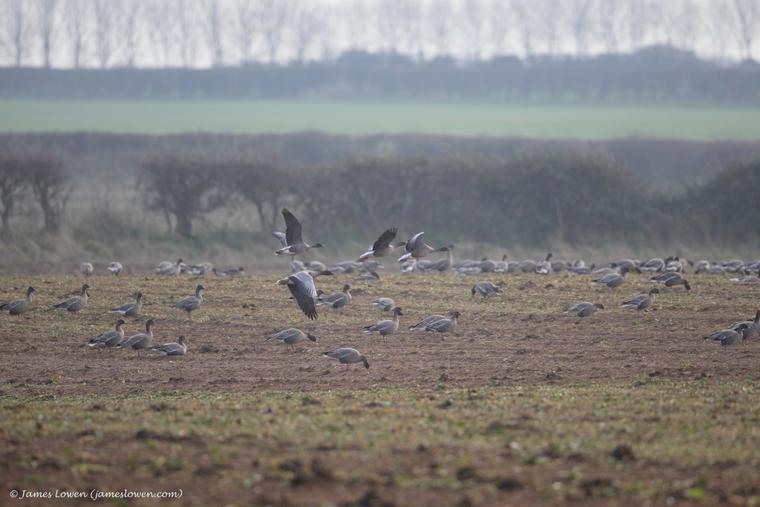 Next came the highlight of the day. An immense breakfast, stacked 6cm deep, for under a tenner at an inland location. I am keeping the precise site secret, largely because north Norfolk doesn't have enough suppression (except on Scolt Head Island), and that needs to change. Gargantuan though the fry-up was, it was no match for a Lowen.

There, you see! I didn't succumb to the Christmas redbreast thing. Except... that I did. How could I not? In Titchwell car park, this Robin was feeding so close that I papped it with my phone. The following is uncropped at a few centimetres range. The little mite even pecked at my phone itself. A Redbreasted Christmas it is. How twee.

The experience was thus less startling than hoped, but it was still a joy to see the swell team with Common Scoters....

Nah, sod that. I'm talking about Norfolk's first Red-breasted Goose for nearly ten winters - and the first I have seen in the county since about 1999. It is just about visible in the photo above - a photo that demonstrates why I do not normally phonescope - as it wanders up to nuzzle the Todd's Canada Goose. Both birds were mooching in a field near Docking - and that Yoav Perlman, Terry Townshend and I saw them at all was thanks to a phone call from Ben Lewis. I had actually seen the Todd's a couple of days earlier, while briefly absconding from a family 'n' friends day out; we were only three miles away, so it would have been rude not to. Here's a marginally less bad image of Todd that day.