Canariensis Kestrels were common, and a few insularum Common Buzzards soared over the north coast. Yellow-legged Gulls (atlantis) were abundant along south of Palm-Mar, where one Southern Grey Shrike (koenigi) showed briefly.  Blackcaps (of the alcoholically named subspecies heineken) were common in hotel gardens. We saw a few Ravens (tingitanus) around the place; these were more confiding than British birds. 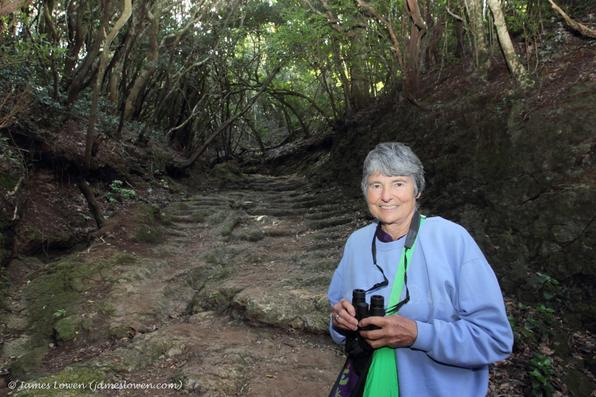 As most readers of this blog know, my natural interests go wider than birds. Butterflies included Canary Large White, Canary Speckled Wood, Canary Red Admiral, Bath White and Geranium Bronze. A couple of attractive micro-moths were flushed by day (to be identified...). Unfortunately, attempts to see a couple of the endemic orchids floundered, but I had fun with Tenerife Lizard (and a  glimpsed Tenerife Skink). I didn't get to any running water for dragonflies, but nevertheless scrambled Epaulet Skimmer and Red-winged Dropwing (both of which were new for me). The only mammal was a dead Algerian Hedgehog. Plants (so far identified) included Hedgehog Pericalis and Golden Houseleek, plus Teide Viper's-bugloss etc up top.

A Long-eared Owl (canariensis) south of Teide was jammy, and it was odd watching Great Spotted Woodpeckers (canariensis) feeding o pine cones. A few Chaffinch (canariensis) fed around the Anaga picnic site (see below), which meant that the only endemic subspecies dipped was Stone Curlew (distinctus). Not a bad effort, particularly when you throw in encounters with Barbary Partridge (near Santa Cruz) and Barbary Falcon (Mirador las Grimonas)! 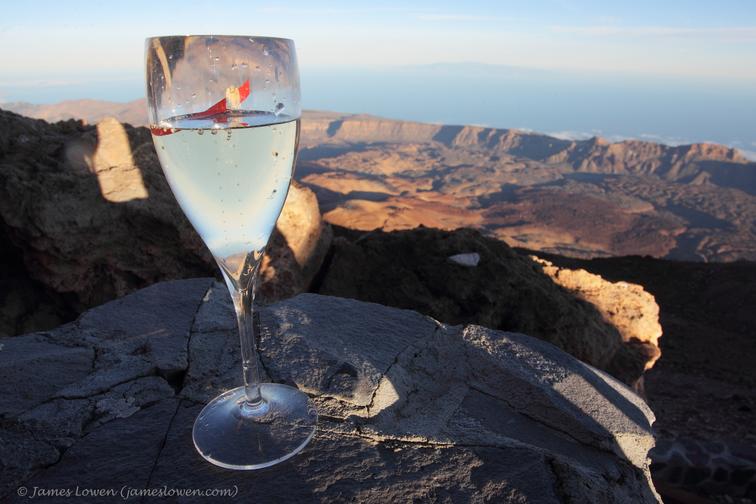 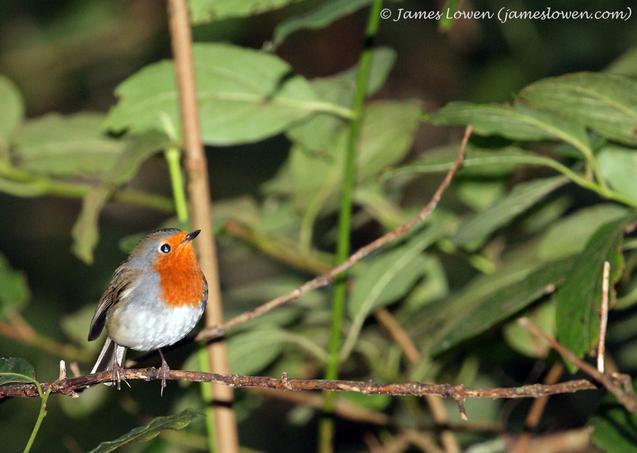 One of the joys of the press trip element of the visit was a sundowner (sorry, sunset) at the top of El Teide (3700m high) and stargazing from the crater below. Both were special experiences. 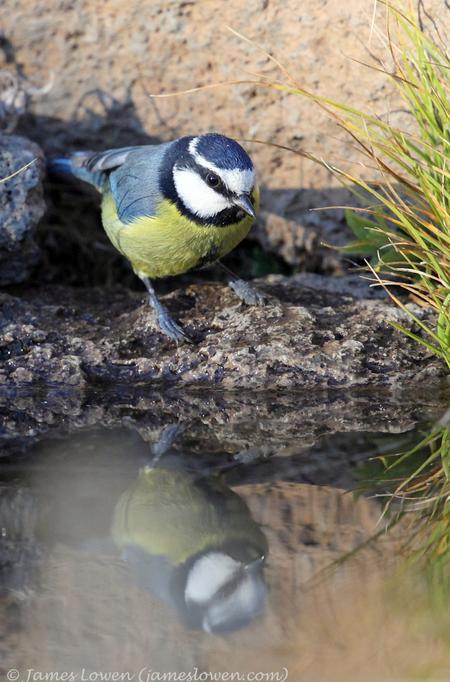 In Tenerife, it is not only the sky that is blue...

Another Macaronesian endemic, Berthelot's Pipit, is renowned for being showy. I enjoyed photographing them... up until the image stabilisation mechanism on my 500mm lens ceased working (a problem that is costing me £400 to repair; there's clearly no such thing as a free holiday).

Fourth on the list was Atlantic Canary, and we saw birds pretty much anywhere with trees (and a few places without). Living in Norwich, my local football club is nicknamed the Canaries, so seeing these finches brought a touch of East Anglia to this African archipelago.

The next targets were theoretically a little more testing: the two pigeons. For Bolle's Pigeon we went to Steve Webb's site north-east of las Mercedes on the Anaga Peninsula (Llano los Viejos). By the time we arrived (late... after a gourmet gala dinner the night before in a poshed-up banana plantation), the picnic site was already disturbed so there was no chance of encountering Bolle's scurrying over the ground. We managed a couple of views of perched and flying birds on the trail up to the mirador, but only the most record of photographs was feasible. Laurel Pigeon was much easier. The first five minutes at Mirador las Grimonas were fraught; no pigeons at all. But then - London bus-style - columbids appeared everywhere. Hard to be sure of numbers, but probably double figures, including four in a tree. Awful record shots below.

I am a fan of Blue Tits, so seeing numerous African Blue Tits (or Tenerife Blue Tits if you fancy splitting them) was great fun. They were common everywhere bar the southern lowlands (where we staying in ***** hotels, in my case the unfeasibly posh Bahia del Duque).

A dead 500mm means resorting to a back-up lens. For me, this meant spending more time with my relatively new 100-400mm mark ii than I had dedicated since purchase. Pretty much every other shot on this page was taking with this versatile lens, and I feel it performs pretty well - even if it lacks reach. Rectifying this latter issue y coupling zoom with a 1.4xTC slowed down auto-focus too much for me to nab any images of (Tenerife) Goldcrest... although this neatly brings me onto (Canaries/Macaronesian endemic subspecies. Of which I jammed into all bar one of Tenerife's offerings. The luckiest was Sparrowhawk (granti) which flapped over the outskirts of Costa Adeje one evening. Robins (superbus) were very smart; we saw three in the laurel forests at Anaga. 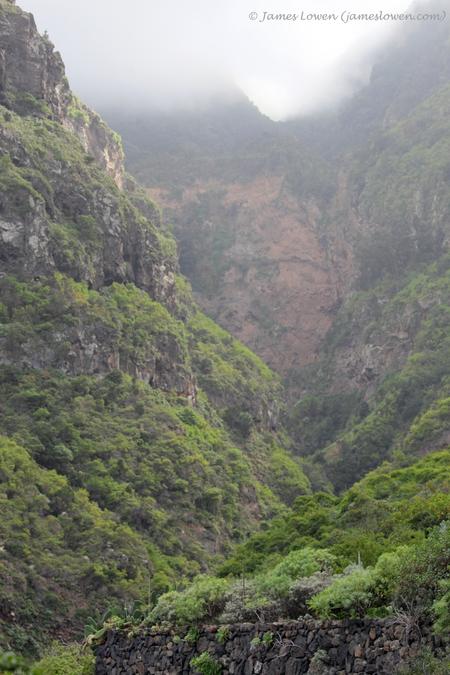 I had been to Tenerife before - on a diplomatic jolly, in my former life - so none of the birds would be new. But that didn't mean that I wouldn't enjoy seeing them again - and, of course, papping them to within an inch of their rectrices. Top of my photographic wants list was male Blue Chaffinch, a near-threatened, pine-forest endemic I had gasped at for a mere ten seconds on my previous visit. No such worries this time; go to the right places, and they abound. A dozen at Pilar Chio and Las Lajas, plus a handful at El Portillo included the odd showy individual.

The bird that responded most frenetically to my pishing was Canary Islands Chiffchaff, another endemic. It was a treat to watch these birds, which were common pretty much anywhere with vegetation. Vocalisations are clearly different from Common and Iberian Chiffchaffs, but CIC also felt longer tailed, and had a habit of splaying open its tail (rather than dipping it, like Common).

For not much time spent outside wildlife-ing, this is quite a haul. And, this being Tenerife, the scenery away from the (ghastly) southern coastal resorts was simply stunning. If Tenerife had not become package-holiday-central, I dare say it would be one of Europe's finest outdoorsy destinations. That said, there's space enough for both...

You may have spotted that some perches appear in several photos, adorned by different species of bird. This is down to a remarkable experience at El Portillo, where I turned 'bird whisperer', 'pishing' in 50-odd birds of four species to flirt with us, bathe or drink in a tiny pool, call manically - none further than five metres from our dropped jaws. I have never experienced anything like it - and hope to write it up for a magazine.

As an adjunct to attending the excellent AGM of the British Guild of Travel Writersin Tenerife, I wondered whether it would be feasible to see all endemic bird species and subspecies occurring on the island, plus a selection of endemic reptiles, orchids and other bits 'n' bobs, in a mere 36 hours. If so, this would make it possible to take a Saturday morning flight out from London, and a Sunday evening flight back - and see everything inside a weekend. My thanks go to the Guild for organising the AGM, to Tenerife Tourism and PR consultancy Hume Whitehead for hosting and to Tricia Hayne and Hilary Bradt(traveller and publisher extraordinaire, and a long-time hero) for accompanying me on off-piste, non-press trip adventures. Trip reports by Jono Lethbridge and Steve Webb were  useful, but particularly helpful was a review copy of Crossbill Guides' brand new book, Canary Islands - II: Tenerife and La Gomera, which I will review on this blog shortly.

And with that, I retierate my thanks to those namechecked in the first paragraph along with all others who made the trip such fun (John Harrison, Adrian Phillips, James Stewart and Sue Watt among them) - and raise another montane glass to the hosts. High-altitude fizz? I'll have some of that.