The message was clear. This was a crime scene.

Reaching the dunes, I looked down and across at scattered groups of people trekking across ribbed sandflats and under ruffled-quilt sky, heading to or returning from the whale's wake.

Superimposed on this scarlet viscosity were human footprints. Scores of them.

Of all things a JCB arrived from  town. Its mission: to cover the bloody mess with sand. (Was this semi-burial to avoid contamination? Or to deter scavengers? I don't know, but the committal felt partial.)

To me, at least, in my emotional state, the message seemed clear. We may not have had the whale's blood on our individual hands, but it was our collective human footprint on the wider environment that might have induced this tragedy and those of 28 fellow deep-sea cetaceans in paltry recent weeks. The post-mortem, of course, will not be so bold. It is rightly based on evidence. But following ample time spent in South Georgia, I carry the guilt of our nation's whaling past and that colours my judgement scarlet.

I ventured to the seaward side of the whale. There a tide of red, a channel of blood, resolved itself in the sand. A small percentage of the whale returning to the ocean.

I walked back over the sandy runnels and crossed the dunes to the golf course. The Skylark was still singing its hymn; perhaps in the same, uninterrupted songflight. I had spent 45 minutes at the wake of the whale; the same duration as yesterday's funeral service.

There were children, extracted from school by parents who understood that witnessing the dead whale would, today at least, educate more than the national curriculum. There were couples and singletons. There were TV presenters, policemen and coastguards. And there was a whale, isolated from the beach and distanced from us by blue-and-white tape, imploring onlookers not to cross.

By the time I arrived, the post-mortem was already well advanced. Researchers from the UK Cetacean Strandings Investigation Programme (CSIP) of the Zoological Society of London had made incisions and extracted material for examination. 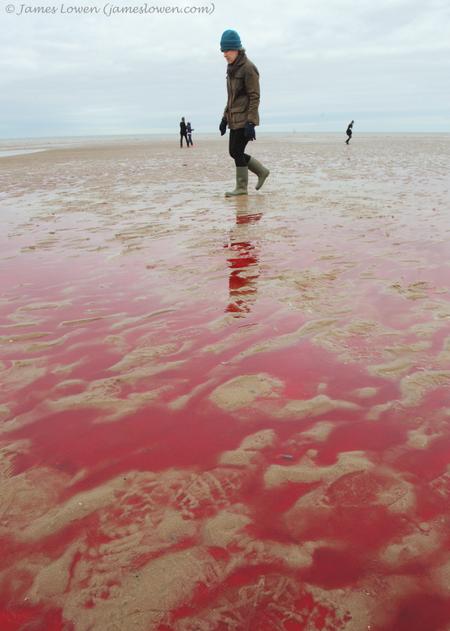 A great gouge in the whale's underside screamed violently with crimson, scarlet and purple. Organs spilled out. We all looked on, in pain. 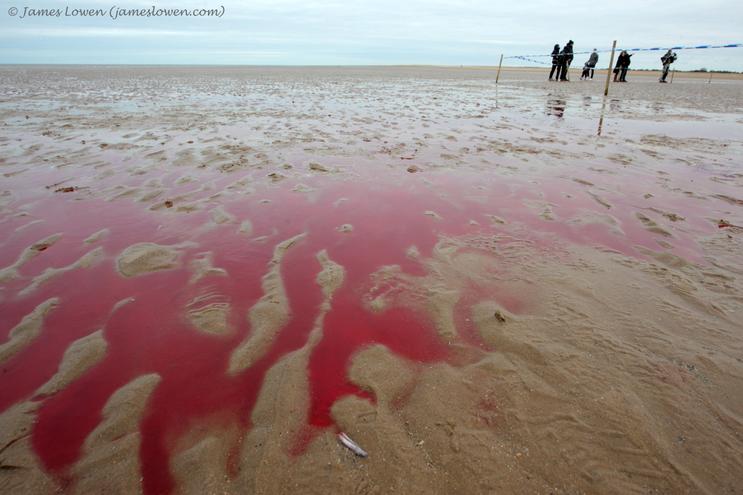 Parking up in a nearby housing estate, I walked across the manicured green of a coastal golf club towards the beach. A Skylark sang in the air above. I passed through a chain of beach huts, most painted blue as if to entice a summer sky.

The Sperm Whale, a young male, measured perhaps seven or eight metres in length. He was stranded - the 29th to have done so in western Europe this year - early yesterday morning. He died that evening, bullet head pointing towards the sea (he knew which direction to head, even if he couldn't do it) and tail flukes sagging at a morose angle. 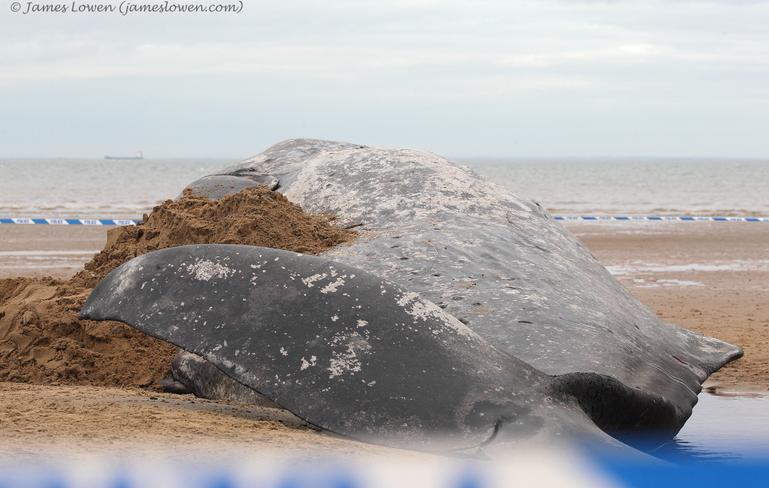