Following more gen from Dougal and Will, we quickly located several Dune Villa Villa modesta, effectively a dune bee-fly. Smart things, but unwilling to post for photography. We searched hard for Bedstraw Hawkmoth caterpillars, but without success (unlike James Emerson a few days later). Birdwise, we scraped a Great White Egret.

Finally, a few moths from New Costessey. I realised yesterday that I have been misidentifying Squarespot Clay, a Nationally Scarce moth; I have had three this week alone, and need to check my photos of similar-looking species from 2014-15 to check I didn't misidentify those as well! Other nice catches have included Pebble Prominent, Sallow Kitten and a few Knotgrass. Plus the local Breckland Plume and (county rarity) Bordered Sallow that Matt Casey caught round the corner and brought over for me to enjoy.

The second of the Minsmere visits was with long-time friend Dave Capper. The previous day we had tromped around North Norfolk. We failed to see Montagu's Harrier; the fledged young had presumably dispersed. We did poorly at Titchwell, although found what looked like a Lunar Hornet Moth hole (in the first sallow as you descend from the main path to the first hide), and I had flight views of what looked very much like an adult LHM in willows at the NW end of the Meadow Trail. Close, but no cigar. Bolstered by lunch at Thornham's brilliant Eric's Fish and Chips, our afternoon improved. We counted 234 Creeping Ladies-Tresses at Holkham, although the three Yellow Bird's-nest to which Will Soar and Doiugal McNeill had alerted us were sadly slug-munched.

The Scrape offered pleasant viewing: a nearly adult Caspian Gull (which Will Soar conned me into looking at) and 25+ Spotted Redshank on one visit, and a delightful gathering of 45 or so Little Gulls or another. Butterflies abounded. Goodly numbers of Painted Lady,Red Admiral and Peacock on buddleia around the visitor centre, several Graylings scattered around, the odd Brown Argus and what transpired to be among Minsmere's first (three) Wall Browns for a decade, about 200m north of the sluice. 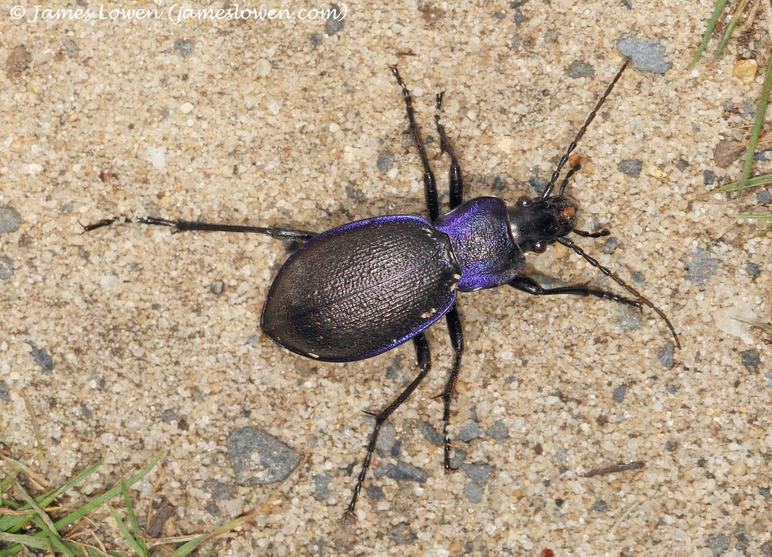 I even managed a couple of in-flight shots.

Given that I not only wrote about  Minsmere's Ant-lions, but recommended to the visitors of BBC Springwatch Unsprung that they ought to come and see them at the RSPB's flagship during August, I thought it right to take my own advice - and renew my acquaintance with these fabulous creatures. Two sandy flanks of the visitor centre were pockmarked with  conical depressions marking Ant-lion lairs.

The occupants of several pits were watched flicking sand, seeking to snare an unsuspecting woodlouse or ant. And, with patience, one Ant-lion was watched nabbing a Devil's Coach-horse. Each time the latter hoped that it had got away, it was grabbed more firmly, shaken viciously and - millimetre by millimetre - was dragged underground to a sandy death. If you look closely in the images below (regrettably dark as the area was in shadow), you can just about make out the Ant-lion mandibles and a bit of head. Wouldn't like to meet that down an alley late at night. 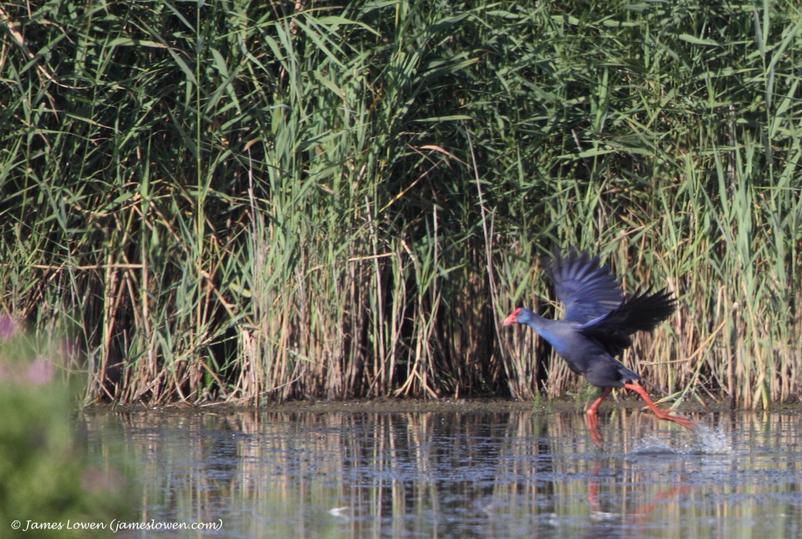 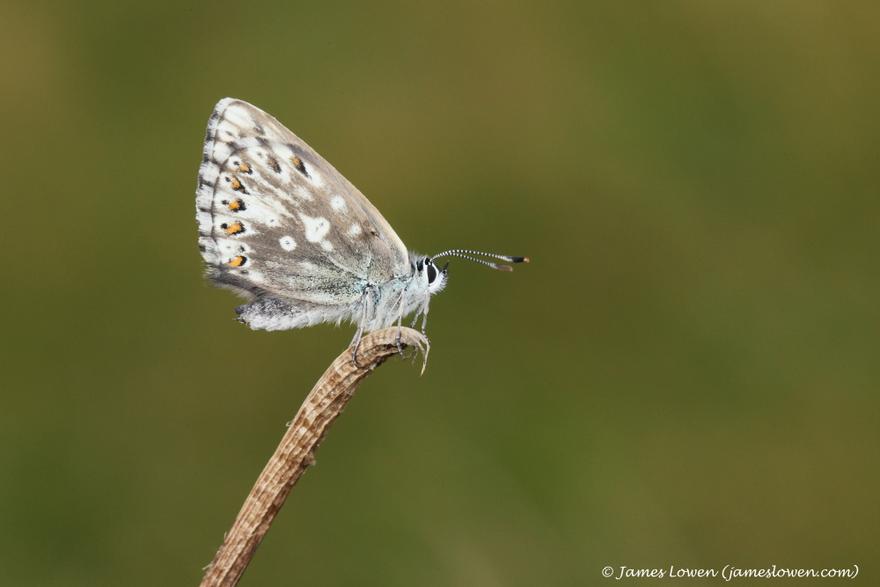 One other invertebrate stunner admired was this Violet Ground-beetle. What colour! What a size!

Our final location of the day was Warham Camp. The botanical highlight was two groups of Autumn Gentian, a plant that I hadn't realised occurred here until Will and Dougal found it earlier in the week. Despite the strong wind, we managed a single Six-belted Clearwing (albeit too brief for Dave to see) and a few Chalkhill Blue, including this confiding female, which had just finished egg-laying. 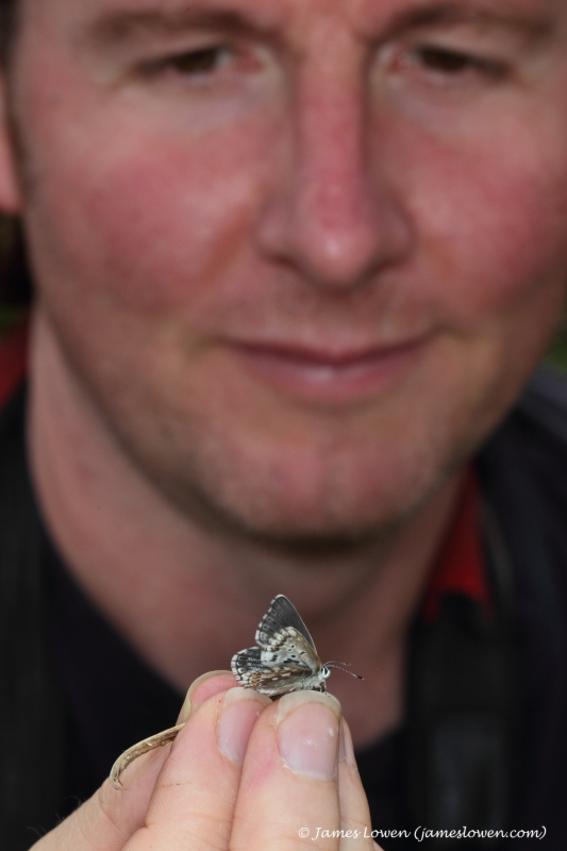 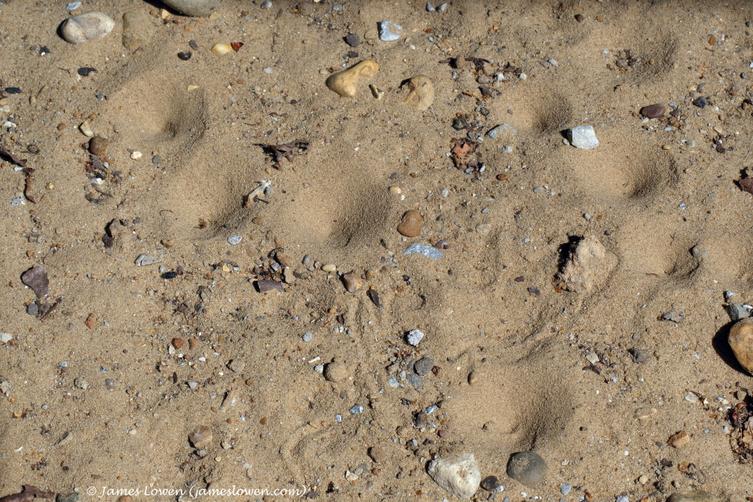 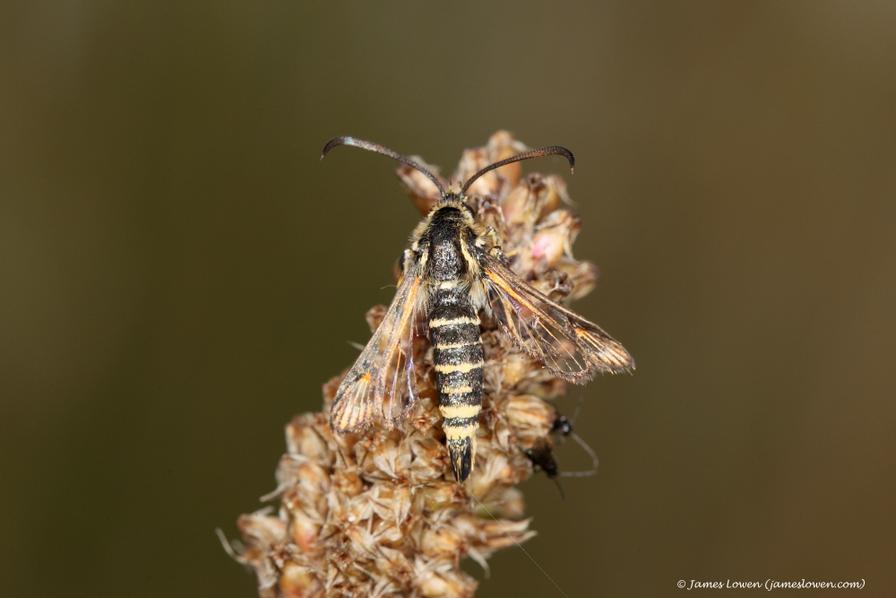 I've visited Minsmere three times in eight days this month. Each trip has been different, but all have been excellent. I saw what should be the UK's first fully acceptablePurple Gallinule (or Western Purple Swamphen in modern-speak) on both its first and last day; neat symmetry for a stunning bird (albeit one with which I am familiar from other countries). On neither occasion did we get close views, so the photos are sub-optimal. Nevertheless, it looked and felt wild.... get in!

Whilst I only managed two brief glimpses of Pantaloon (aka Hairy-legged Mining) Bee, Minsmere's Bee-Wolf colony was showing very well just west of North Wall. We managed some wonderful views on our second and, particularly, third visits. 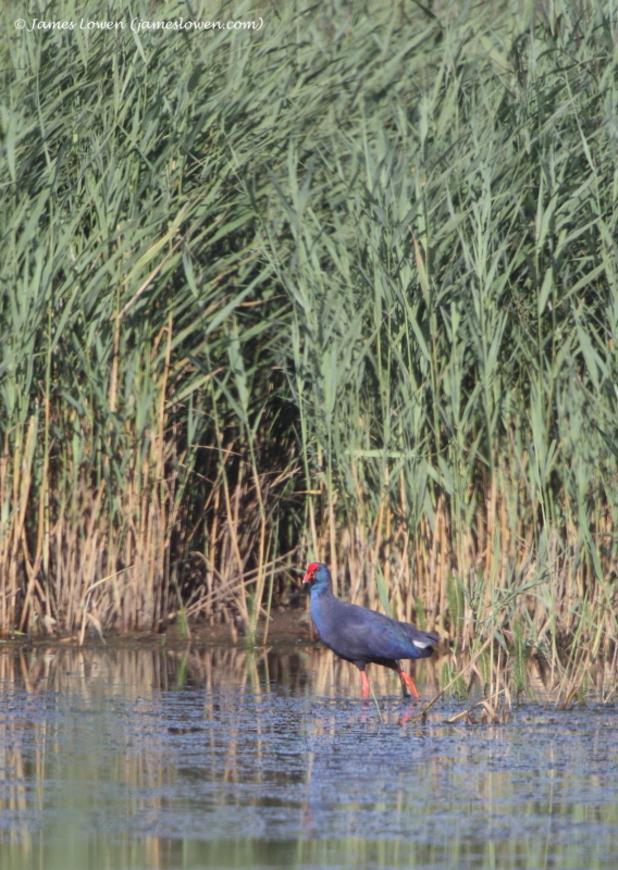 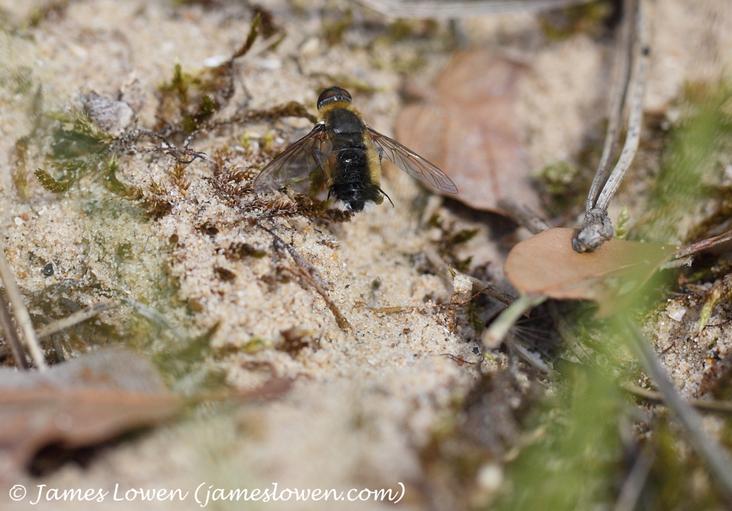 As I wrote in A Summer of British Wildlife, lions have long been part of British life and national identity. Cave lions once prowled Britain, King Henry II’s coat of arms featured a lion, and motifs of lions feature prominently among British sporting insignia. Today, however, is about a rather different lion. Seeing an Ant-lion arguably represents the apex of insect-watching. Granted, adults are benign-looking creatures, resembling slender damselflies. The larva, however, is a beast unto its own: a formidable, scary-looking predatory insect that sets a deadly trap to sate its voracious appetite.

On the third visit, several individuals were watched transporting honeybees back to their underground lair.

On our first visit, Will  and I arrived at North wall to be confronted by a thick bed of Birds-foot Trefoil. We immediately mused that it would be a good place to try for Six-belted Clearwing, although we had no idea of the species's status in Suffolk (let alone at Minsmere). It was dusk, however, so not point rootling through the vegetation. I made amends on both subsequent visits, and was delighted to come across four Six-belted Clearwing on the first occasion and two on the second. The habitat looked perfect... and so it was. A single insect posed for photos on each visit.It transpires that the first and only record of this species at Minsmere was last year, so we may have discovered a decent new population. Several people twitched them during the following week.