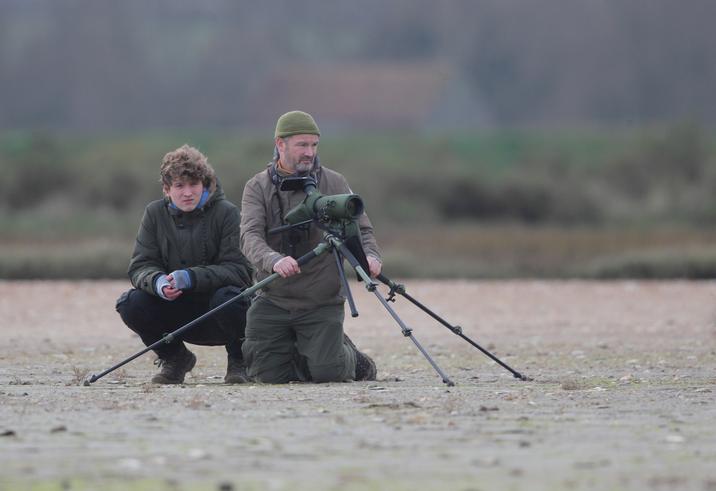 Then it was back to Flitcham via Choseley (where two Rough-legs were tussling in the wind). I stayed until the sky darkened at Flitcham. But the Pallid Harrier elected not to show. Dip eight, fair and square. I should have been there earlier.

"You should have been earlier!" The sentence that all birders dread hearing. Nobody actually said it to me when I arrived at Flitcham pre-dawn for my seventh attempt at Norfolk's wintering Pallid Harrier. Nor did they have to. Smiles on faces, and a pair of green-clad, tripod-toting men already returning to their car were sign enough. Despite arriving before sun had hinted at waking up (at 07h57), the Pallid Harrier flew past precisely one minute before I got out of my car (at 07h56). Finches, including Brambling, and a showy Barn Owl (if one smothered in poor light) were no compensation.

Reaching Thornham Point, we enjoyed the three Shore Larks. They stayed a fair distance away, but were still typically enjoyable. I never tire of seeing them - and fondly recall the first quartet I co-found with Matt Hobbs, gloriously horned birds one April in North Yorkshire.

I was meeting up with John McLoughlin, aka Johnny Mac, an old mucker from my Yorkshire youth plus son Sean. Not being a muppet (unlike me), Johnny had been on site before 07h56 - and thus was one of the Smiling Many who greeted my tardy appearance. Johnny's stomach started rumbling, so we headed off for my favourite morning meal in Norfolk, the Burnham Deepdale cafe 'big breakfast'. Being birders, however, we felt it rude to adjourn for a feast before we had seen a couple of scarcities. So we called in at Choseley (one Rough-legged Buzzard perched up, distantly) and Brancaster Staithe (Red-necked Grebe still present, but still out of decent camera range). Then we ate... and ate.

Heading out to Thornham, a group of Twite flirted with us. The editor of my book 52 Wildlife Weekends teasingly accused me of being rather in love with Twite, such were their frequent, eulogised appearances in that book. He is right. Another wildlife editor has made it his mission to finally see Twite this year. These images are for him.