There was plenty else to look for while scanning the sea. Pelagic Cormorants were common. Whilst we failed on Pacific Diver, we picked up a vagrant White-billed Diver north of Rausu (another long-overdue tick for Dave). Best of all, the coast off both Rausu and the Nemuro lighthouse hummed with a bevvy of auks: Least Auklet and Crested Auklets were the most common, with a supporting cast of Pigeon Guillemot, Spectacled Guillemot,Ancient Murrelet and Brunnich's Guillemot. All the auks were distant, but did display the power of my 2x converter (when coupled with the 500mm) in good light.

And that was it. Hokkaido: brilliance, on snow. What a trip. Pardon? What's that I hear you say? What about the eagles? Ah, yes... I knew I was forgetting something. Or, just perhaps, I am saving them for an entirely separate blogpost...

Just east of the town harbour, a small area of coast was unfrozen, and was splattered with seaduck. I had never seen anything like it, even on the Norwegian fjords of Varanger.

Among mammals, a Red Fox walking on sea ice was amazing, and numerous Sika deer confiding. A few Harbour Seal off Nemuro were bettered by a couple of Largha Seal off Rausu. 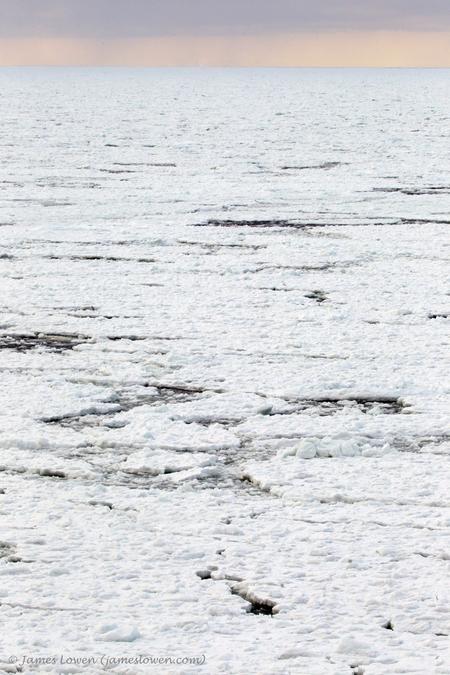 The protagonists riffed through our coastal forays for the remainder of the trip, along this northern coast, around Rausu, along the Nosuke peninsula, around Furen and across Nemuro, and finally at Akkeshi. So I will name and celebrate them all here, in a single glorious roll-call: Harlequin (the world's best-looking duck, without peer), Greater Scaup, White-winged Scoter, Black Scoter, Smew, Goosander, Red-breasted Merganser and Long-tailed Duck. Here are the first three species, in order.

Back to birds. Other passerines around and about included Dusky Thrush, Marsh Tit, Japanese Tit, Coal Tit and Eurasian Nuthatch.

Not quote as good looking, but very welcome nevertheless, was Red-faced Cormorant. Four birds seen roosting near the lighthouse at the tip of the Nemuro Peninsula were not only adequate compensation for dipping Rock Sandpiper five times, but also my 4,000th bird species in the world. Not a huge proportion of the world's avifauna (40%, roughly), but certainly an achievement of sorts.

It was hard to leave the avian and mammalian delights of Yoroushi Onsen, but time and tide waited for no man... even where seas were frozen. So we headed north to the coast at Abashiri. And found the sea almost wholly caked in an icy crust.

What else did we see on Hokkaido? A star, for sure, was Asian Rosy Finch, one of my most-wanted birds from the trip. Delectable creatures, almost lingerie-like in colour and laciness.

For some people, particularly those with four-letter names (random examples: Mick, Rich and Josh), one of the attractions of a winter trip to Japan is gulls. As I may possibly have written on this blog, down the pub or indeedon Twitter, I couldn't care two hoots about gulls of the large white-headed kind. Erm, except that, in Japan, I rather liked them. I won't burden this blog with too many pictures (you can find more images on my photographic website), but would not be doing Hokkaido justice if I omitted them entirely here...